Solomon’s Seal Guide: How to Grow & Care for “Polygonatum”

Read our guide to Polygonatum for everything you will ever need to know! Tips for growing & caring for “Solomon’s Seal” plants

By Miruna SecuianuMarch 25, 2022
Solomon's Seal
Affiliate Disclosure: We independently test & research all products reviewed on the site. We may earn a small commission if you buy through one of our links. This does not affect our reviews or placement of products on the site.

Polygonatum, commonly referred to as Solomon’s Seal or King Solomon’s-seal, is a genus of woodland flowering plants in the Asparagaceae family. Solomon’s Seal plants are native to temperate regions of the Northern Hemisphere like Asia, Europe, and North America.

The genus’ scientific name comes from the ancient Greek where it means “many knees”, describing the multiple jointed rhizomes of Polygonatum plants. There are about 74 species and hybrids included in the Polygonatum genus but only some of them are used as ornamental plants,(P. Biflorum or Multiforum, P. Verticillatum, P. Humile, P. Odoratum, and others).

Solomon’s Seal plants are used in traditional medicine to treat fever, allergy, pain, or inflammation. In 1930, a pharmacologist named Hedwin Langecker discovered that Polygonatum plants can be effective in the treatment of diabetes.

Solomon’s Seal plants grow mostly in the dappled shade of tall trees. When growing them in your garden, you should plant them in a spot that ensures partial to full shade. Indoors, place them near a window or in a dark corner, as they prefer low light conditions. Depending on the climate of the region you live in, their preferences may vary. In cool climates, they can tolerate more sunlight than they do in warmer ones.

Due to the high variety of species, these plants can adapt and thrive in almost any climate. While they are used to their native habitat conditions of cool temperatures and slightly humid environments, some species of Polygonatum plants can still grow in hot and dry regions if you help them through.

The great majority of Solomon’s Seal plants, except Polygonatum Humile, are very adaptable to other climates. Make sure you provide them with enough shade, soil moisture, and protect them from strong winds. Also, you can add a thin layer of mulch to maintain their roots cool.

When first planting a Polygonatum plant, you can create a mix of natural garden soil and compost. These plants enjoy high quantities of organic matter, so this planting mix will give them a proper start. They grow at a pretty slow pace, so you can feed your plant at the beginning of the growing season with organic fertilizer or compost once a year to boost its growth. 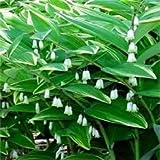 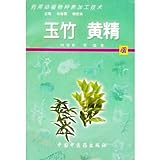 Both indoors and outdoors, Solomons Seal should be planted in a soil mix that is organic, slightly acidic, and has good drainage properties. If you are growing Solomon’s Seal plants indoors, it’s best to use large containers.

Usually, if the environmental conditions are optimal, Solomon’s seal plants are not affected by diseases or pests. When the humidity levels are very high, you might notice some discoloration on the leaves. This is usually a sign of fungal diseases. The most common pests that affect Solomon’s Seal plants are snails and sawfly slugs. If your plant is infested, their leaves or stems will have tiny holes. You can treat them using a caterpillar spray or a pyrethrum insecticide.

Solomon’s Seal plants produce small flowers that drop off naturally when they are spent. During their growing season, their leaves remain healthy, but the stems can fall off the plant in the cooler temperatures of the fall and winter seasons. Due to their natural ability to constantly keep themselves looking fresh, these plants do not require any extra pruning.

They are tolerant of short periods of drought, but not when they are first planted. While Polygonatum plants are getting used to their new environment, you need to provide them with plenty of water. Once they have settled in, they will be pretty forgiving to neglect, as their rhizomes store large quantities of water to survive.

If Solomon’s Seal plants experience long periods of drought, they will benefit from extra watering. Established plants prefer low levels of humidity similar to those in their natural habitat.

Polygonatum plants can be easily grown from seeds, but the most efficient way to propagate them is by division once every three years. The rhizomes can be divided in early spring, as this is the moment right before their growing season starts. If you are not a big fan of their yellow foliage, you can also propagate these plants in the fall.

Depending on your preferences, you can move the existing clumps into another place or cut larger rhizomes into several pieces. This will result in multiple Solomon’s Seal plants.

Dig the soil and use a sharp knife or spade to divide the clumps. Once this process is complete, you can safely replant the rhizome divisions in damp, well-draining, and rich in an organic matter soil mix. The rhizomes should be placed horizontally, a few inches deep in the soil. Make sure you place them in a spot that provides them with partial shade and water them regularly to maintain the soil damp. They are slow-growing plants, so it may take some time before you notice new growth.

If you are looking for low-maintenance flowering plants, we have good news. Most types of Salmon’s Seal are easy-to-grow and to propagate. They are very popular ornamental houseplants, exhibiting their colored, bell-shaped bloomings in many gardens and homes from all over the world.

Salmon’s Seal plants naturally grow in the forests of temperate regions and have no high demands regarding their environment. They will grow happy and healthy as long as you plant them in well-draining, organic soil, choose a spot where they can receive proper light and humidity, and provide them with grow-boost fertilizers and regular watering.

Once their flowers have ended their blooming, tiny fruits will take their place. The berries of some species are edible for humans, so you can look for a traditional Chinese recipe if you are interested in adding some extra flavor to your daily meals. But keep in mind that Solomon’s Seal plants can be toxic to pets.