Ornamental Peppers Guide: How to Grow & Care for “Capsicum Annuum”

Read our guide to Ornamental Peppers for everything you’ll ever need to know! Tips for planting & caring for "Capsicum Annuum"

Capsicum annuum and its numerous cultivars are commonly called ornamental peppers, ornamental chili peppers, or Christmas peppers. It will surprise nobody that these peppers belong to the Capsicum genus of beautiful flowering plants, many of which give rise to fruits that are not just edible but also incredibly tasty. Ornamental peppers fall into the Solanaceae (nightshade) botanical family, which counts just under 3,000 known species among its members.

Although Capsicum annuum produces edible fruits, this species and its cultivars are primarily popular for ornamental reasons — and if you chop the peppers up to use in the kitchen, you may find yourself a little disappointed.

As ornamental plants, Capsicum annuum will, on the other hand, unquestionably spice up your garden! Some people also choose to grow ornamental peppers as houseplants, which can be very successful and instantly brighten up any space.

Although “Capsicum annuum” is the name of a single species within the Capsicum genus, it is crucial to be aware of the fact that most ornamental peppers are cultivars. That means that each ornamental pepper variety has its own unique features, appearance, and taste profile. Depending on the cultivar, ornamental peppers can also be called sweet peppers or cayenne peppers.

Being native to warm tropical regions, ornamental peppers thrive in full and direct sunlight — preferring at least six daily hours of sun exposure. For these plants to remain healthy and grow quickly, it is best to ensure a temperature of at least 75 °F (24 °C). That does mean that people attempting to grow Capsicum annuum as a houseplant will need a grow light to support their peppers’ growth.

Although ornamental peppers do need moist roots to remain healthy, they are not picky about humidity, and can easily withstand periods of drought. These plants are extremely frost-sensitive, which is precisely why they are grown as annuals in climates with colder winters, despite the fact that they are perennial plants. With the right care, ornamental peppers grown in containers can successfully overwinter indoors.

Capsicum annuum has a very strong preference for rich loamy soil, rich on organic matter. Ornamental peppers will also grow in sandy or clay-based soils, and are not too picky about pH levels. 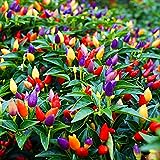 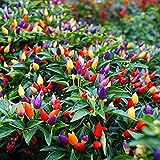 These plants have an upright growth habit and heavy fruits, so they perform best when staked. Because ornamental peppers easily get stressed if their roots are interfered with, it is best to avoid repotting them unless absolutely necessary.

Fertilizer-wise, ornamental peppers are moderately demanding — your Capsicum annuum will do best with a 5-10-10 fertilizer regimen rich in phosphorus and potassium. This will bring out an abundance of colorful peppers, while suppressing the leaves, which are not considered the most attractive feature for most cultivars.

The fact that ornamental peppers are quite vulnerable to a number of pests, ranging from aphids to spider mites and thrips, means that you will want to keep a close eye on your plants. When you spot pests, treat the plant with citrus oil or insecticidal soap. Fungal infections are another fairly common problem, especially if air cannot properly circulate around the plant. To help prevent this, give each ornamental pepper plant plenty of growing room, and treat them with antifungal spray where necessary.

It’s not necessary to prune your Capsicum annuum cultivars. If you like, you can pinch them to encourage bushier growth, or you could trim them into a desired shape. Never prune flowering stems, as this will prevent peppers from forming.

Ornamental peppers might prefer moist soil, but if their soil becomes waterlogged or soggy, they will suffer and begin to wilt. Make sure that the water can drain well and if you are growing Capsicum annuum in a pot, empty the tray frequently.

Ornamental peppers are challenging to propagate through stem cutting. If you go this routine, it may take several tries before your cuttings root successfully. Because of this, most gardeners prefer to start their ornamental peppers from seed, as it is a much easier process.

Let’s have a look at the steps you need to take to propagate ornamental peppers from seed:

To (attempt to) propagate ornamental peppers through stem cuttings:

Capsicum annuum is a beautiful species, and with so many cultivars to choose from, just about any gardener hoping to spice their garden decor up can find the perfect variety. Depending on your choice of cultivar, you will not only be able to feast your eyes — you may also be able to enjoy genuinely flavorful chili peppers in the kitchen!

Dill Guide: How to Grow & Care for “Anethum graveolens”