Clematis Guide: How to Grow & Care for “Clematis Jackmanii”

Read our guide to Clematis for everything you’ll ever need to know! Tips for planting & caring for “Clematis Jackmanii”

Clematis is a genus of amazing woody, perennial, vines with over 300 different species and cultivars — some of which are also called virgin’s bower, old man’s beard, leather flower, traveller’s joy, and vase vine. Clematis vines belong to the Ranunculaceae or buttercup botanical family, and produce beautiful, large, flowers.

Some clematis species are impressive climbers, while others spread widely. The fact that plants within the clematis genus originate from all over the world — with natives from nearly every continent, and therefore nearly every possible climate — means that no matter where you live, you’ll be able to find a clematis that’s just right for your garden.

The most popular clematis vines are hybrid cultivars, however, and one particular variety has been a garden favorite ever since the 1800s. Clematis x Jackmanii (or Clematis ‘Jackmanii’), more commonly called Jackman’s clematis or Jackman’s virgin’s bower, is a smaller member of the clematis genus with amazing deep purple blooms.

Jackman’s clematis and other clematis vines are delightful ornamentals — and though growing and caring for these flowering vines isn’t too challenging, you do need to be familiar with a few tips and tricks to help your clematis thrive.

This plant strongly favors bright sun with some partial shade — clematis vines are often said to prefer to have their heads in the sun, and feet in the shade. The ideal location for your Jackman’s clematis, and most other clematis species, depends on your geographical location. The further north you are, the sunnier of a spot you will want to pick for your clematis. In warm, southern, regions, clematis vines prefer warm sun earlier in the day and partial to full shade in the afternoons.

Jackman’s clematis prefers mild temperatures between 55 and 60 °F (12 to 16 °C), which makes these plants very popular in the United Kingdom, but some of the other species can handle warmer temperatures with ease.

Soil-wise, Jackman’s clematis and its close relatives thrive in nutrient-rich neutral soils that drain well and can remain evenly moist. To take another look at the whole “head in the sun, feet in the shade” recommendation, it’s crucial to note that clematis doesn’t like warm soil conditions — which can cause its root system to become diseased, ultimately placing the plant’s survival at risk. This is why it is common for experienced gardeners to cover the soil surrounding clematis’ roots in rocks, though mulch can also be used to help cool the conditions on the ground. 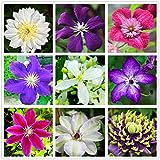 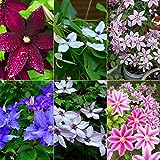 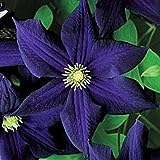 Clematis has some unusual planting needs, so pay close attention. Plant your clematis with its root ball three to four inches (eight to 10 centimeters) below its initial nursery-pot level to help ensure its survival — this mechanism encourages latent buds to emerge within the soil, and can save your clematis if the growth it shows above ground encounters any diseases. In addition, it’s yet another way to make sure the plant’s roots can remain adequately cool, the importance of which cannot be overstated.

Your clematis will also need to be fertilized, and gardeners can choose to use a complete fertilizer starting in the spring and carrying on monthly through the vine’s entire growth period, ending after the bloom subsides. Instead of this, using natural compost is a viable alternative.

Some clematis species bloom on old wood, while others bloom on new growth. The beloved Jackman’s clematis blooms on new wood, on stems that have developed during the current growing season. This helps you determine the best time to prune your plant — which you will want to do to train it in a particular direction. Prune Jackman’s clematis after the flowers wilt, and before new stems begin to proliferate; in other words, any time from the late fall through the late winter to very early spring.

These plants get stressed when they are overpruned, and it is recommended to keep your pruning efforts to a minimum.

Clematis vines strongly favor evenly moist soil, and should therefore be watered more frequently than some other plants. Keep in mind that different species of clematis might require more or less water.

Young clematis vines will be able to develop better when they are watered two regularly; to three times a week — this watering routine should continue for at least the first few weeks of your clematis plant’s life. When your clematis vines are mature, they will thrive with about an inch of water every week — though in summer and in warmer conditions, your clematis will need more.

Indoor clematis vines should be watered more often too — two to three times every week is best.

When it comes to propagating clematis, you can make it easy or hard on yourself — depending on the method you choose as well as the clematis species.

The steps gardeners need to take to propagate clematis vines through stem cutting are:

Propagating clematis vines from seed is technically possible, but it’s a long and hard process that won’t always succeed.

These plants can also be propagated through layering, which requires you to bend a living stem into the soil in your garden and waiting for it to take root. To offer yourself the best odds of success, stick to stem cuttings.

Jackman’s clematis and other clematis varieties are incredibly popular garden ornamentals for good reason. While caring for these vines comes with a fairly steep learning curve, you’ll master it soon enough. In return, you’ll be able to enjoy beautiful flowers during the summer, and wonderful foliage for much of the rest of the year.

Ornithogalum Guide: How to Grow & Care for “Star of Bethlehem”

Nymphaea Guide: How to Grow & Care for “Water Lily”

Damask Rose Guide: How to Grow and Care for “Rosa Damascena”

Kalanchoe Plants Guide: How to Grow & Care for “Kalanchoe blossfeldiana”