Calathea Medallion Guide: How to Grow & Care for “Calathea Veitchiana”

With its large, emerald leaves with contrasting white stripes and burgundy underneath, Calathea Medallion is one of the most beautiful houseplants. Calathea veitchiana has such a graceful appearance that it’s easy to see why it is becoming more and more popular among gardeners from all over the world.

Part of the prayer-plant family Marantaceae, Calatheas have an incredible ability: they move their leaves in accordance to the day-night circadian rhythm. At nighttime, you will notice the leaves folding up as if in prayer, hence the nickname. Native to the tropical Americas, Calatheas are the definition of greenhouse plants, so creating the right environments is essential for their survival.

Besides adding interest to any dull corner, this tropical plant has another perk: it thrives in low-light conditions.  However, caring for Calathea Medallion requires more dedication than regular indoor plants do. Although we do not discourage inexperienced gardeners to get one, we strongly advise them to consider its care requirements before deciding to add a Calathea Medallion to their collection of plants. But don’t worry, by the end of this article you will find out everything you need to know about growing Calathea veitchiana ‘Medallion’.

Calathea Medallion is pretty fussy when it comes to lighting conditions. Like most tropical plants, exposure to direct sunlight will cause leaf burn. If you notice any scorching, move the plant away from the window to a more sheltered area. Medallion plants thrive in medium light conditions, similar to their native habitat.

Although Medallions can grow well in north-facing rooms with low light environments, a bit more light will improve their appearance and keep the leaf’s patterns more vibrant. The best location for a Calathea inside the home is in a room with plenty of indirect sunlight.

Make sure you keep your Calathea Medallion away from heaters or radiators. If the air is too hot, the leaves will start to curl. Try to maintain a temperature between 65° and 80° Fahrenheit (18° and 29° Celsius) all year round.  If the leaves are fading, your plant is receiving too much direct sunlight. Move it to an area where it can receive only indirect light.

It is worth noting that Calathea Medallion does not appreciate cold drafts and temperature changes, so avoid placing it next to doorways. Because they don’t mind humidity and low-light conditions, Medallions are an excellent choice for bathrooms and kitchens. This makes up for their pretentious nature. 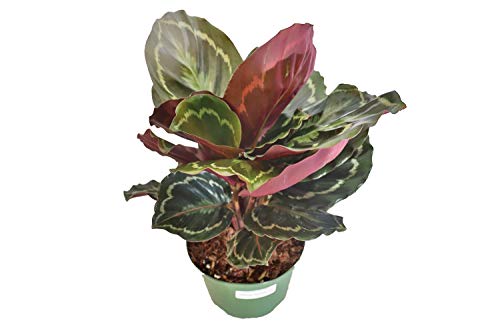 If you notice the mesmerizing leaves of your Calathea Medallion start to brown up or curl, then it could mean that the environment is too dry. To fix this problem, mist it with distilled water regularly, at least once per day. Spray the air around the plant and avoid spraying too close to the leaves. Alternatively, you can use a pebble tray or a humidifier. Ideally, the humidity should be around 50%.

If you want to place Calathea Veitchiana in your garden, on your porch, or on the balcony, make sure the temperatures never drop below 55°F (12°C). Low temperatures can cause permanent damage or even kill the plant. To prevent this, always bring it inside on cold nights. In a south-facing location, make sure your Medallion only gets filtered morning sunlight.

A common problem with tropical plants is the burning of the tips or edges. This could happen due to your tap water. To avoid this, use rainwater, distilled water, or allow the tap water to sit for a day so that the fluoride and chlorine can evaporate. Avoid using shine products on the leaves, but make sure to clean them with a damp cloth when they get dusty.

Calathea Medallion grows best in a porous potting mix with excellent drainage. The ideal soil would be a mixture of potting soil, peat moss, and perlite. You can also add charcoal, orchid bark, vermiculite, or coco coir. The soil should hold enough moisture and nutrients, but also drain well. Avoid soils with too much bark or compost mixed in, as they can cause fungus infestations.

When you buy the plant, check if the soil is too compact and if this is the case loosen it up a bit. Make sure the pots have enough draining holes. To improve drainage, place pebbles along the bottom of the pot. Always empty the tray so that the plant doesn’t sit in soggy soil. Keep in mind that terracotta pots dry out faster than ceramic or plastic.

Calathea Medallion can be fertilized once a month during the growing season, from spring to late summer. During the winter, fertilization should be slowed down or stopped completely. Fertilizer should be moderate and diluted to ¼ of its normal strength. Over-fertilization can cause mineral build-up in the soil which can cause your plant to become leggy, develop root burn, and eventually die. Occasional flushing may be beneficial for Calathea Veitchiana.

To replenish soil nutrients, repot your Calathea every year or every other year. Repotting in spring before the growing season will give the roots more room to grow. Moreover, it can resolve any preexisting soil fungal issues.

Calathea Medallion is not a drought-tolerant plant, so it requires regular watering. A common mistake when it comes to watering tropical plants is to water on a schedule. Watering too seldom or too often can cause dried leaves, fungus gnats, root rot, and many other problems.

The best way to know when to water is by testing the soil for moisture before watering. Press the potting soil with your finger and check if the top 1” (2.5 cm) is dry. If it’s still moist, hold off watering and check again in a couple of days. If it is dry, thoroughly water the plant and then empty the tray. Most Calatheas, including Medallion, Zebra, and Rattlesnake varieties, it’s better to under-water than over-water.

Unlike plants that can propagate just from cuttings, Calathea Medallion propagation is done by dividing the roots before growing season. To successfully propagate your Medallion, you need to have a healthy, established mother plant, as they don’t like being disturbed. When they are well taken care of, Calatheas shoot out new leaves to expand their beauty. After un-potting the plant, you can see that it is easy to separate it into smaller parts.

After determining which areas you will divide, carefully untangle the roots with your hands. If this is not possible, use a sharp, sterilized knife to cut the tuber. Place the new division in fresh potting soil like the one the mother was in and water thoroughly. The soil needs to remain moist, but not soggy over the next few weeks. Place the new specimen in a dark area, away from strong light. Make sure the humidity is high and mist as needed. After 2 to 4 weeks, you should notice new leaves, indicating that your Calathea Medallion has been successfully propagated.

Although Calathea Medallion is a queen that requires a little bit of extra attention, it’s totally worth it! Gardeners from all over the world love this tropical plant for its stunning emerald green foliage with contrasting white stripes. This beauty even has a day-night circadian rhythm! If you are willing to put in a bit of effort, Calathea Medallion will reward you by bringing life to the most gloomy corners and low-light rooms.

Are you growing Calathea Medallion? Share your experience in the comments below! 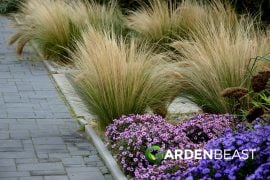 What Are the Best Ornamental Grasses to Grow Outdoors? 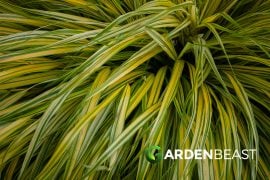 Hakone Grass Guide: How to Grow & Care for “Hakonechloa Macra” 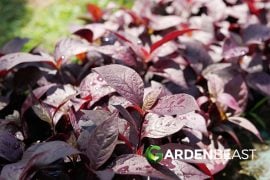 Alternanthera Plants Guide: How to Care for “Joseph’s Coat” or “Joyweed”