Read our complete guide to Pilea Peperomioides for everything you will ever need to know! Tips for planting & caring for “Chinese Money Plants”

By Hollie CarterMarch 15, 2022
Guide to Pilea Peperomioides: How to Grow and Care for “Chinese Money Plant”

Having a relatively fast-growing habit during its growing season (from spring to fall) and reaching up to 12 inches (30 cm) in height, it is a rather erect plant, with round, dark green leaves, measuring up to 4 inches (10 cm) in diameter on a long petiole. Due to its almost perfectly rounded, coin-shaped leaves, Pilea makes a great decorative plant for any home. It is said that this plant can bring the energy of good fortune into your home, and it is also good for meditating on financial abundance.

Samples of Pilea Peperomioides had been collected by George Forrest in 1910 from China, in the area of Cangshan mountain at altitudes from 5000 to 10,000 feet (1500-3000 m), not far from the ancient city of Dali. Later, in 1912, the German botanist Friedrich Diels officially named and described the plant to the botanical world.

For a very long time, the Pilea Peperomioides plants had been in local cultivation in their native area as an ornamental plant. However, like many other Pilea, this flowering plant has an insignificant value, and it did not attract much attention.

Any plant requires proper natural light to grow at its fullest potential and our Pilea is no different. As this plant has succulent-like features, light-wise, the best placement for a Chinese Money Plant is in a place with bright light, but with no direct sunlight. This plant will suffer a lot if it receives insufficient light, making its leaves bend and curl rather than remaining flat and shaped like a coin. You can switch from bright to low light areas from time to time, gradually.

The ideal temperatures required for healthy growth should not rise above 85 °F (30 °C), and you should keep it away from places with low temperatures that drop below 55 °F (13 °C). In order to ensure optimum growth results, it is better to place Pilea in your bathroom or kitchen, as they provide warmer conditions and a decent level of humidity.

Although Pilea Peperomioides plants are friendly, easy, and quick growing, they still need a lot of attention and care, so make sure you feed them a standard half-diluted houseplant or cacti based fertilizer, once a month, to help them grow in their best possible way. Also, they are known for having a great time in standard all-purpose potting mix to experience proper drainage.

Since the large leaves usually tend to accumulate dust, regular showering or wiping down of leaves will benefit your Chinese Money Plant. To ensure that the plant keeps a nice, balanced shape, rotate it at least once a week to prevent it from getting lopsided. In the process of dusting the leaves, also take some time to inspect the undersides and watch out for pests. 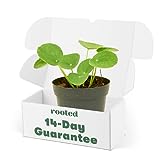 This Pilea Peperomioides species likes to be watered thoroughly, every now and then. It’s best to wait for the top layer of the soil to dry out before watering it again. Typically, watering this plant once a week will be enough. In the summertime and warmer, sunnier weather, Pilea needs water quite a few times a week, whereas, in wintertime or low temperatures, less watering is required.

If your Chinese Money Plant tends to droop and to have an unusual aspect, starting to show a loss in its stem’s strength, it might be giving signs of getting over-watered or dried out. In order to make the difference between these two cases, you should always check the soil’s state. If the soil seems moist you should wait for things to dry out, if it is too dry, it needs immediate watering.

If you want to help the soil breathe and allow the moisture to evaporate, you should consider aerating the soil of your Chinese Money Plant, before the initial watering.

Part of the reason that Pilea Peperomioides has spread around the world is that it is quite easy to propagate. A healthy plant will eventually make little Pilea babies, which can be separated from the mother plant. To cut the offsets safely, you need to use a clean and sharp knife, following the stem about an inch (2-3 cm) under the soil.

Once the process is done, plant it in a new pot and keep the soil moist until the plant is well-anchored and begins to produce new leaves. When new plantlets grow straight from the stem, you can remove these too, and place them in water for about a week or two until roots develop, and they are ready for the steps mentioned above.

Given the fact that its native habitat is among mountain rocks if you want to repot your Pilea Peperomioides plant, it is recommended that you place some stones at the bottom of the pot. In addition to offering better drainage, the stones will keep your plant intact in case the roots start to rot.

With their easy and quick to grow attributes, the Pilea Peperomioides are the ideal choice as ornamental plants in every home or office. Their coin-shaped, dark green leaves bend together into a pleasing image, and the idea that these plants may make little flowers occasionally is more than rewarding in itself.

Finding a place with bright light, but with no direct sunlight, providing a well-draining potting soil, and watering it weekly based on their needs and signs will make your Chinese Money Plant a stable environment for growing healthy and happy.

Even if they are known as pet-friendly and not harmful for humans in case of consuming them, it is suggested that you keep these houseplants out of reach of cats, dogs, and small children.

Asclepias Incarnata Guide: How to Grow & Care for “Swamp Milkweed”