Chinese Evergreen Plant Guide: How to Grow & Care For “Aglaonema”

Read our complete guide to Chinese Evergreen Plants for everything you will ever need to know! Tips for planting and caring for "Aglaonema"
By Hollie Carter December 20, 2021

Several varieties of hybrid Chinese evergreen have been cultivated over generations. The popularity of the plant with indoor growers and homeowners alike have spurred and maintained the trend. They work both as casual accents to add color to any room as well as ornamental conversation pieces.

Many fake houseplants are actually modeled after the Chinese evergreen thanks to its incredible versatility. If you are ready to move on from plastic to the real thing, the Chinese evergreen, which is actually the genus aglaonema is a great place to start. All plants need general TLC in order to thrive, especially in indoor conditions. Unlike other indoor plants that need very specific care, the aglaonema is much more low maintenance.

The Chinese evergreen is very durable which makes it perfect for absent-minded homeowners or even children to care for. It thrives without much access to natural light and can survive without water for longer than most plants. There are several different color variations which means you can choose plants that fit the aesthetic of your room or create a colorful menagerie with a wide assortment.

The most popular of this slow-growing plant is the silver queen, which can be found in abundance worldwide. Instead of gambling with other houseplants, take a look at our guide on how to care for the Chinese evergreen to see if it’s the best choice for your home.

About The Chinese Evergreen Plant

Chinese evergreens are very tolerant to low, light environments, though variegated evergreens will need moderate light to thrive. Aglaonema should never be placed in direct sunlight, instead, choose a shaded corner or area in your home that receives moderate or low ambient light. The best temperature range for this plant is 68 to 77 °F, however, they can also thrive in temperatures as cool as 55 °F.

Growing Chinese evergreen plants is much easier than other types of house plants. It will thrive in a pot filled with easy drain soil. A good mix of sand, potting soil, and perlite will ensure that it can soak up moisture without becoming overly wet. Low and moderate humidity is ideal for the Aglaonema, which is normal for most households. You should avoid placing the plant under fans or vents as it will dry out the soil and prevent proper growth.

The Chinese Evergreen thrives when the soil is moist but does not need to be heavily watered every day. Water the soil well and then allow it to fully dry before the next watering. Overly wet soil or stagnant water in the pot will lead to root rot which can result in the death of your Chinese Evergreen. It is important that your plant is housed in well-draining soil so that any overflow from waterings will drain to the bottom of the pot and away from the roots.

The best potting mixture is soil, sand, and perlite, or consider adding a bit of bark to the mix. The pot you choose to house your plant should also have a medium size drainage hole on the bottom. You can double pot the plant in a holed pot that sits on top of a decorative tray as well. This will prevent the plant from becoming waterlogged and developing root rot. There is no cure for root rot so it is best to prevent it entirely. Only water your Chinese Evergreen when the top two inches of soil has dried.

The Chinese Evergreen thrives in humid environments with moist soil, however, it is also able to store moisture. This means that even with infrequent waterings the plant will survive with no issues. It is important to water the plant at least once per week and keep it away from cold conditions.

Trimming or pruning the plant is optional. If you have a certain look that you would like to achieve, then you can trim the leaves accordingly. The plant is slow-growing, so other than dead leaves, it can be left to its own growth patterns. Most Chinese Evergreens will grow straight up, but if you would like it to grow horizontally, simply cut the leaves back on a regular basis. This will make the plant appear more like a bush as opposed to a miniature tree.

Propagating a Chinese Evergreen is fairly simple. You can use seeds, tip cuttings, stem cuttings, or via division. If your plant sheds the bottom leaves leaving the lower portion bare, you can take a piece off of the top of the plant and allow it to root in fertile soil. The most common way to create more Chinese Evergreen plants is to split the plant as it grows from the root up.

To grow a new plant from a stem cutting, simply take a healthy stem from a mature plant. The cutting will need to be several inches long, so it is important to propagate from a mature plant. In fertile soil that has been treated with a rooting hormone, plant the cutting and allow it to take root. Alternatively, you can encourage roots to grow along the bottom of the cutting by suspending the end in a jar or glass of clean water. The root emergence from a Chinese Evergreen cutting is about three weeks.

The best time to propagate is in the middle of summer when the heat is the most intense. If you live in a low heat area, you can house the cutting in the kitchen or near any other gentle heat source. 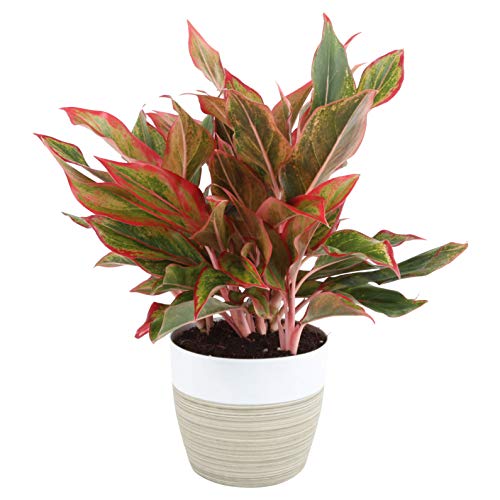 Taking care of a Chinese evergreen houseplant is much easier than most people realize. They are the perfect plants for older people who have problems with mobility, or even for absent-minded homeowners who may forget to water plants every day. Overwatering can lead to root rot which should be avoided at all costs, and make sure to keep pets away from the leaves.

Adding a water-soluble houseplant fertilizer twice a year will give this slow-growing plant a healthy nutrient boost. Mature plants may bloom in the summer with enough light, and as the plant gets larger, propagating can be completed with the pruned parts. The leaves will collect dust along their waxy surface which can be wiped down with a cloth or sprayed with a water bottle. Of all houseplants, Chinese evergreens are among the easiest to care for which makes them a perfect choice for beginners. 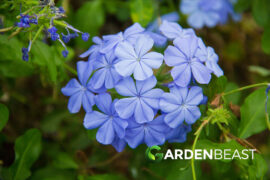 Plumbago Guide: How to Grow & Care for “Leadwort” 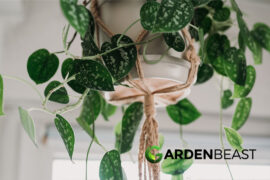 Scindapsus Pictus Guide: How to Grow & Care for “Satin Pothos” 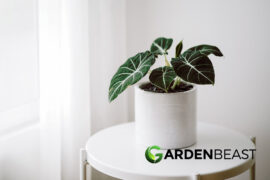