Oregano Guide: How to Grow & Care for “Origanum Vulgare”

Read our guide to oregano for everything you’ll ever need to know! Tips for planting & caring for “Origanum vulgare”

By Miruna SecuianuJune 15, 2022
Oregano Guide: How to Grow & Care for “Origanum Vulgare”
Affiliate Disclosure: We independently test & research all products reviewed on the site. We may earn a small commission if you buy through one of our links. This does not affect our reviews or placement of products on the site.

Oregano is a great plant to grow both indoors and outdoors. It produces delicate blooms and attractive foliage and has a unique flavour that will elevate any dish. Read our guide to oregano for everything you’ll ever need to know! Tips for planting & caring for “Origanum vulgare”

Native to Mediterranean regions but commonly found in temperate regions as well, Oregano is a member of the popular Origanum genus, in the mint family – Lamiaceae which it shares with other popular herbs and plants such as catnip, hyssop, lavender, lemon balm, mint, basil, marjoram, salvia, thyme, and more.

Oregano is a treasured culinary herb with flavorful leaves that can be used both dried and fresh. It is most frequently used in savoury and spicy dishes such as grilled vegetables, meat, fish, salads, but also pizza, and pasta.

For most of us, oregano is the staple herb of Mediterranean cuisine and important addition to our favourite dishes so why not bring this treasured herb into our gardens and homes? Origanum vulgare is a useful, hardy, and low-maintenance herb that looks great in containers, cottage gardens, rock gardens, hanging baskets, and even as a groundcover.

In this article, we’ll go over a few key aspects that gardeners need to remember when adding Origanum vulgare a.k.a oregano to their plant collection. Keep reading our article to find out more!

Like all Mediterranean plants, oregano loves full sun and well-drained soil. The ideal soil pH for oregano plants is between 4.5 and 8.7, but you don’t need to worry too much as this plant is not picky when it comes to soil.

Also, it will thrive in most types of soil so you don’t have to amend it before you introduce oregano to your garden. The most important aspects that you need to consider when growing oregano are to plant it in a sunny location, avoid overwatering, and trim the plants regularly.

One thing to remember when growing oregano is that this plant can get leggy, so it’s going to need a little bit of maintenance and shaping. If your plant is looking lanky, all you have to do is to pinch it back or harvest the leaves regularly.

If you love adding oregano to your food, this will happen naturally. You can also collect the leaves and dry them as oregano leaves have a very nice flavour when dried. So, even if you don’t cook with oregano very often, you should still harvest the leaves to encourage a nice busy growth.

If you live in an area with hot and dry summers, oregano will be more than happy to grow in your garden. It will only require a little water once a week. It is very important to avoid overwatering and growing oregano in soggy soil is not recommended as it can lead to a wide range of issues such as pest infestations and fungal infections.

To be on the safe side and to keep your plants healthy and happy, use the ‘soak and dry’ method which consists of letting the soil dry out completely before you water your plants. Being a drought-tolerant plant, oregano will make an easy-going container plant and a nice addition to your kitchen windowsill or to your balcony herb garden. It doesn’t require extra fertilization, which makes the process of growing it even easier.

There are many easy ways to propagate oregano, all of them equally rewarding and fun. You can make more of these versatile plants by growing them from seed, or by propagating existing plants through cuttings or division. 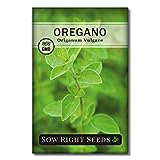 You can sow oregano seeds in containers or outdoors. If you want to plant the seeds outdoors, it’s recommended to do so when daytime temperatures are around 20°C (70°F). Growing oregano from seeds is an easy task, all you have to do is sprinkle the seeds and press them gently into the soil.

You don’t need to cover the seeds because they are tiny and they need light to germinate. It is recommended to sow the seeds in rows and leave some space in-between the rows and between the seedlings. The germination period will usually take about 4 days, so you can grow oregano from seeds even if you are not a very patient gardener.

Oregano is a great container plant, so you can start the seeds indoors as well. If you plan on growing your oregano plants in containers, make sure you place them on a sunny windowsill where the seedlings will get plenty of light. You can use grow lights if you can’t provide your plants with enough natural light. You can keep the plants in containers or you can transplant them outdoors in spring when the last risk of frost has passed.

The best time to propagate oregano plants from cuttings is in spring. Use a clean, sharp knife or a pair of garden shears to cut a piece of softwood stem. It’s best to cut it at a 45-degree angle. Next, remove the lower leaves and place the cuttings in a mix of peat moss and vermiculite, or in water.

If you put the cuttings in water, you will have to change the water every two or three days. If you choose a soilless mix, moisturize it regularly. For best results, keep the cuttings in a well-light location, protected from direct sun. This propagation method will usually take a few weeks and your new plants should be ready to be transplanted into their new environment in four to five weeks.

Mature and vigorous oregano plants can be propagated through root division. The perfect time to start this process is in spring or at the beginning of autumn. It is important for the ground to be warm in order for the plants to thrive after the division. This method is very straightforward – all you need to do is to dig up your mature plant and cut the root ball into two or more sections. Next, plant the freshly-cut sections in containers or directly in your garden.

Like all delicious herbs, oregano can attract a wide range of insects such as aphids, leaf miners, and spider mites. Although they don’t always kill the plants they infest, these insects can still be quite harmful and annoying because they suck the sap and the fluids from the plant’s leaves and stems.

The first signs of infestation are usually deformed, brown, or falling leaves. It is wise to inspect your oregano plants regularly to check for intruders and to make sure you notice them before they wreak havoc. If you notice any unwanted guests on your oregano plants, you can start by washing the pests off and treating the plants with neem oil. A blast of water is usually enough to remove aphids, but if the infestation is severe, neem oil is an effective solution.

When the environmental conditions are not ideal, especially if you accidentally overwater your plants or if they are too crowded, your plants might be affected by fungal infections such as root rot and botrytis. The first signs of a fungal infection are rotting leaves and roots, or gradual wilting and the best thing to do is to remove the affected plants to prevent the disease from spreading to your healthy plants.

Oregano is a great herb to grow both indoors and outdoors. It is attractive when grown in containers and some varieties can be grown in hanging baskets as they have a trailing habit. They are also easy to grow in garden beds and can be paired with many different vegetables and aromatic herbs. If you love Mediterranean cuisine as much as we do, you will certainly enjoy having your own oregano plant. Are you growing oregano? Share your experience in the comment section!

Laurus Nobilis Guide: How to Grow & Care for “Bay Tree”