Ninebark Guide: How to Grow & Care for “Physocarpus Opulifolius”

Read our guide to Ninebark for everything you’ll ever need to know! Tips for planting & caring for “Physocarpus Opulifolius”

Physocarpus opulifolius, commonly called the eastern ninebark, Atlantic ninebark, common ninebark, or simply ninebark, is a deciduous perennial shrub. This shrub belongs to the Rosaceae (rose) botanical family that contains both shrubs and trees, making it a relative of the cherry, apricot, and peach trees. Its genus, Physocarpus, has less than a dozen members, of which most are native to north America.

As shrubs, ninebark species that include Physocarpus opulifolius make for attractive additions to any garden.

Ninebark shrubs don’t only have uniquely exfoliating bark, which is an attractive feature, but these shrubs also flower during the late spring. Their blooms, arranged in spherical patterns, may be white or pink and are equally attractive in either case. Their deep purple foliage keeps these shrubs interesting even when they are not in bloom.

Physocarpus opulifolius and its cultivars are fairly undemanding plants that require very little assistance to thrive, as they can tolerate varied conditions.

These wonderful shrubs will reward you with an abundant bloom if you can make sure that your ninebark receives full sunlight, with these plants preferring six hours of bright light a day. If you live in a hotter southern location, however, your ninebark plants will appreciate partial shade in the afternoon, which will protect their leaves.

Temperature-wise, ninebark performs well in a variety of climate conditions. The only conditions they do not cope well in are especially hot and humid ones. In this case, Physocarpus opulifolius becomes vulnerable to fungal diseases. These plants are frost-tolerant and will succeed in colder regions.

While Physocarpus opulifolius prefers neutral or acidic soil types, these plants can also handle alkaline soil. Because they tend to grow along streams and in thickets in the wild, they tolerate moisture well, but do need well-draining soil. Clay or loamy soils are ideal for ninebark shrubs, and these shrubs will thank you by staying strong and healthy if you mulch around the base of the stems every year to assist with moisture retention. 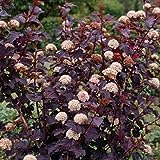 Ninebark plants benefit from an organic fertilizer and some compost during the early spring, to assist their growth. However, the fertilizer, which should be sprinkled on the soil around the base of the stems, only needs to be used this one time annually — Physocarpus opulifolius does not need to be fertilizer regularly.

In terms of pruning, it is not strictly necessary to prune these shrubs in most cases, but many people prefer to prune them significantly because of the fact that Physocarpus opulifolius grows shockingly quickly, and may end up using more space than the gardener would like. If you plan on pruning your ninebark shrub, do so after the blooms have subsided. This will simultaneously help you achieve the shape you desire for the shrub and increase airflow.

Likewise, some gardeners prune their binebark shrubs extensively during late fall, in order to protect their Physocarpus opulifolius during the winter, and to encourage the plants to flower more heavily during the new season. Up to a third of the older, mature, branches may be removed if desired, and the shrub will quickly begin growing again.

One further thing you need to be aware of if you are planning to grow Physocarpus opulifolius cultivarsin your home garden is the fact that Physocarpus opulifolius is at risk of developing two separate problems. Ninebark shrubs easily fall prey to aphids, but this can be prevented by misting them with neem oil — or simply by spraying them down with sufficient amounts of water to physically force these little pests off the shrub.

Ninebark shrubs can also develop powdery mildew, leaf spot, fireblight, and other fungal diseases. This tends to happen in conditions that are a little too humid for the ninebark’s liking. In many cases, increasing airflow around the branches greatly reduces the risk of fungal diseases. This is, indeed, the main reason to carefully prune your Physocarpus opulifolius if you are attempting to grow them in slightly more humid areas.

These beautiful shrubs do not need much water to thrive — and Physocarpus opulifolius will tolerate dryer climates like a champ. Thankfully, mature ninebark shrubs also cope well with wetter conditions. Unlike many shrubs, ninebark doesn’t even mind mild flooding or soil that drains quite poorly. Yes, this means that you will not generally need to water your established ninebark shrubs at all. You need to offer supplemental watering only in cases of extreme and prolonged drought. If you need to water other garden plants growing in the vicinity of a Physocarpus opulifolius, on the other hand, these shrubs certainly won’t complain.

Young ninebark plants should, in contrast, be watered regularly; at least once a week, and in hotter climates even twice. After their first year, this will no longer be necessary.

As with other shrubs, ninebark can be challenging to propagate, but it is certainly not impossible so long as you follow the right steps. The easiest way to propagate Physocarpus opulifolius would be through stem cuttings taken during the plant’s dormant stage, in the fall or early winter.

Here’s a look at the process:

Your new Physocarpus opulifolius can be transplanted to a better location by digging a hole as deep as the root ball, but twice as wide. Your new ninebark shrub will grow rapidly and reach an impressive size within a year.

Ninebark shrubs are beautiful woody perennials that have adapted to a wide variety of conditions. These charming shrubs produce gorgeous flowers, which attract butterflies and bees, during the spring, and grow rather quickly. Whether you’re looking to place a ninebark in your garden to provide an accent, or would like to create a living hedge with Physocarpus opulifolius, these shrubs are easy to take care of.

Magnolia LiLiiflora Guide: How to Grow & Care for Lily Magnolia

Calluna Vulgaris Guide: How to Grow & Care for “Scotch Heather”