Our complete guide to growing chives at home - Everything you need to know from planting to caring for your chives to harvesting.
By Hollie Carter June 18, 2021

Are you looking for ways to keep pests out of your veggie garden this summer? Maybe you’re just a fan of using chives in cooking? Some chopped chives mixed into melted butter create a flavor sensation for seafood and poultry dishes.

Chives also have beneficial protective properties for your vegetable patch. As members of the allium family, the plants contain sulfurous compounds bugs despise. Planting rows of chives around the borders of the veggie garden help deter pests from wandering in and discovering your crop.

Chives are a low-maintenance herb for the garden, and as hardy perennials, they keep producing every year. Like its cousin, the onion chives sprout long fleshy leaves, and most of them are edible. The chive is like the reverse of the onion, lauded for its sprouts and foliage rather than the bulb.

Whether you’re planting for culinary needs or for companions to chase off pests, chives are a great choice for their many benefits for the garden. The scent emitted by chives keeps rabbits and deer away from your crop, but it invites pollinators into the yard.

Chives do well in cooler climates, with the preferred planting season being between the early to mid-springtime for mid-summer harvesting. Gardeners should trim back the chives before they start producing flowers, or the seeds spread readily, becoming somewhat invasive across the yard.

Let chives protect your veggie patch this growing season; they’re ideal companions for tomatoes, celery, cabbage, lettuce, carrots, peppers, and peas. This guide gives you everything you need to know about growing chives.

What are the Types of Chives?

There are two common species of chives, garlic chives (A. tuberosum) and common chives (Allium schoenoprasum). The common variety yields tubular, thin greenish-blue leaves that stretch to heights of 10 to 15-inches.

The plant also produces edible flowers in pretty colors of purple, pink, red, and white. However, the real prize for gardeners is the leaves. They make excellent additions to recipes, with dozens of uses in the kitchen.

Garlic chives, otherwise known as Chinese chives, have a similar look to common chives. However, look closely, and you’ll notice they have flatter and greener leaves than the common chive. These chives also grow taller before flowering, with some varieties getting to heights of 20-inches.

If you’re a garlic fan, then these chives will be your preferred option. The freshly chopped garlic chive leaves add a delicious garlic edge to the herbs, influencing the taste and flavor of the meal. Garlic chives also produce white flowers, with less clustering than the common chive.

Garlic chives are not as cold-hardy as common chives, and they prefer growing in USDA zones four to nine.

When Do I Plant My Chives?

Chives do well as a cool-season crop for the vegetable garden. As a result, the best time for planting the tubers is during the fall. The late fall and winter give the tuber time to establish and start producing shoots the following spring.

Growing chives year-round means that the plants go dormant in the peak of the summer and start producing when the daytime temperatures cool off in the fall. As a cool-season crop, chives grow and produce the best in cooler climates, with optimal harvesting time in the springtime and the fall.

If you live in a warmer climate, you can start your chives indoors around six weeks before the frosts end. Transplant them out into the vegetable patch in the early spring after the last frost. Transplants need to have good growth and shoots before planting into the garden.

If you’re starting your chives from tubers, soil temperatures need to be around 60º to 70ºF for the best germination conditions.

Choosing the Right Spot for Your Chives

It’s best to plant chives in the full sun, but they will handle shady afternoons. Make sure that the soil is rich in nutrients and drains well.

How Do I Plant Chives?

When planting, add compost into the soil and mulch around the base of the plants after the first shoots emerge.

If you’re starting with tubers, sow the rows around 2-inches apart. Plant the tuber a ¼ inch deep and cover it with a layer of soil.

After the seedlings emerge, thin the plants so they have a four to six-inch spacing. For a protective effect on the veggie patch, you can plant rows around the garden’s borders.

How to Grow Chives

Chives establish easily, requiring minimal care during the growing season. Chives are somewhat drought-tolerant, but if you want optimal growth and the highest yields throughout the season, watering is recommended at least twice a week for a total of 2-inches.

Make sure you keep the soil moist throughout the growing season—mulch around the base of the plant. Since the bulbs grow close to the surface, the mulch helps to reduce pests and disease while feeding the roots nutrients.

Chives don’t need much fertilizer if the soil quality is high. However, if you feel your chives could use a boost, give them a top dressing with a nitrogen-heavy fertilizer.

If you let the plants bloom, remove them or cut them back before the seeds have a chance to spread throughout the yard.

You can divide your Chives every three to four years in the springtime. After the first division, you’ll notice the mother plants increase their growth rapidly.

What are the Pests and Diseases Affecting Chives?

Chives are a fantastic herb that helps to keep pests out of the veggie patch. Planting them as a border around the garden deters all types of bugs from entering the space and feasting on your crop. The strong sulfurous polyphenols in the chives emit an unpleasant odor that chases away most bugs. However, there are a few pests that enjoy dining on Chives.

The onion fly likes to lay eggs on chives, letting them hatch into larvae that consume the plant’s roots. Thrips are also somewhat of a problem, and you’ll see little black specks inside the chive leaves if you have an infestation.

While these pests are about the only critters that mess around with your chives, the bulbous herb has some issues with disease. The bulb and roots are subject to easy infection with bulb rot caused by soil-borne pathogens. Overwatering may also lead to the development of white rot in the roots.

It’s challenging to see what’s going on with the roots without pulling up the plant. However, you’ll notice issues with the foliage if the roots aren’t in good shape.

Leaves face issues with pathogens like rust, smut, and fungal leaf spot diseases like grey mold and purple blotch. They are also at risk of developing mildew in humid, cold conditions with low airflow.

When Do I Harvest My Chives?

One of the benefits of growing chives is that the herb has a long harvest season. If you prune a few leaves off the plants, they’ll regenerate, giving you a non-stop harvest for your culinary needs. It’s important to start harvesting at the right time to avoid damaging the plant in early growth.

The first shots from the bulbs start to emerge in the early summer. As soon as the shoots reach three to four inches in length, they are ready for you to start harvesting. As long as you harvest the plants properly, they’ll continue to produce throughout the season.

Typically, the harvest season lasts all the way through the year until the first frosts land. So, gardeners that take care of their chives can have up to eight months of fresh chives for their meals. They also benefit from the protective properties of the plant for the entire growing season.

Those gardeners living in warmer climates can grow chives year-round with perpetual harvests.

Yes, as mentioned, your chives will keep producing, but you have to know how to harvest them the right way. The young leaves are tender and tastier than the older leaves. As the leaves mature, they start to develop a woody taste and texture.

When harvesting your chives leaves, remove the entire leaf from the plant. It’s tempting for gardeners to leave some leaf on the plant, but this strategy is a mistake. Take the whole leave, all the way down to the soil line. This harvesting strategy ensures you get a flurry of new growth, allowing multiple harvests throughout the season.

After the chives finish blooming (assuming you let them produce flowers), cut back the entire plant right down to the soil line. The leaves and stalk may be tough, so you’ll need a pair of pruning or gardening shears for the task.

Removing the woody stems on the chives spurs new growth in the plant, and it will start producing young tender shoots again. 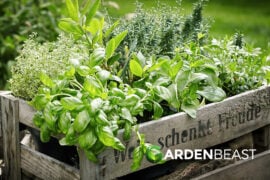 How Do I Start a Herb Garden? Here’s All You Need to Know 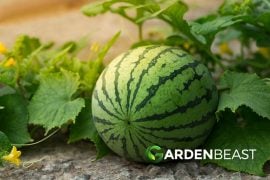