Freshly steamed asparagus is a treat. Whether you enjoy it as a side with a beef wellington, smothered in cheese sauce, or on its own – it’s a culinary delight that’s full of flavor and nutrition.

Growing asparagus is a bit of a challenge for novice gardeners, as the plant requires plenty of care and expert planting technique. However, if you get it right, this perennial species grows readily and provides bountiful harvests.

Still, we feel crowns are the best option, and they take the effort out of growing asparagus. Plant your asparagus in the spring, after the final frosts fall on the ground. When the ground starts to thaw, and you can work the soil, its time to start planting.

The earlier you start, the more time you give the crowns to settle in the soil and establish robust root systems before the start of the growing season. Follow the tips in this guide to grow tall and tasty asparagus spears.

How Do I Prepare an Asparagus Flowerbed?

Asparagus do well when you plant them around a circular flowerbed to form a patch. It’s also an ideal greenhouse plant to grow in raised beds.

Dig a rut that’s a foot deep and 8-inches wide and form it in a ring to accommodate as many crowns as you like. If you’re growing five crowns, then you’ll need at least 10-feet of growing space.

What Soil Amendments Do I Need for Growing Asparagus?

After digging the bed, add your spoil amendments. We recommend using a top-quality organic compost, along with a few handfuls of perlite for each crown. Work the amendments into the soil, and then prepare the planting sites to receive the crowns.

Plant the rootball lengthways into the 1-ft x 8-inch rut. Ensure that your plant the crown, which is where the knotty mass joins, facing up. The spears emerge from the crown, pushing up through the soil to reach the surface.

How Do I Cover Asparagus?

You’ll need to cover the crown entirely with soil, at a depth of between 6 to 12-inches below the surface.

How Do I Water Asparagus?

Water the soil thoroughly after planting the root ball and covering the crown to your ideal depth. The perlite will assist with drainage, ensuring that there’s no waterlogging of your soil. If the rootball sits in waterlogged soil for a while, it starts to develop root rot, which kills the plant.

If you live in a warmer climate, water your asparagus at least three times a week in hot weather. We prefer growing asparagus in colder climates, as they taste better and get less woody. In colder climates, water once a week or between rains, ensuring that the soil never dries entirely between watering.

How Do I Fertilize Asparagus?

After you finish watering your asparagus, spread a thick layer of mulch over the top of the soil. The mulch helps to retain moisture in the ground. As it breaks down, the mulch releases nutrients into the soil, providing the plant with everything it needs to grow healthy and robust spears.

Mulch again at the end of the season after your harvest. Make sure you do this before the winter sets in, to protect your asparagus from the effects of frost and snowfall. 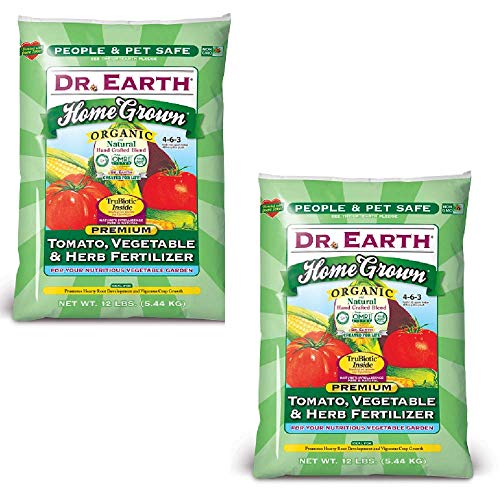 Dr. Earth Organic Fertilizer can be used for Asparagus

How Do I Care for Asparagus?

What Are the Pests and Diseases Affecting Asparagus?

The asparagus is a hardy perennial, but it is susceptible to infection with some forms of disease and infestation from garden pests.

How Do I Overwinter Asparagus?

Asparagus is a hardy plant, and it can easily survive cold wintertime conditions with the right maintenance.

The spears all rise from the ground in the springtime at different rates. Therefore, when harvesting, you’ll have to inspect each spear to see if it’s ready for harvest. You can expect a harvest over a week or two as you wait for all the spears to ripen.

When the spears start to emerge from the ground at the start of the growing season, wait until they get to around 8-inches long before you start inspecting them for harvest. Most spears will ripen when they reach 9-inches long, depending on the planting depth of the crown.

As the spears get taller, the buds start to open, and the plant begins to flower. If you leave you asparagus till this stage, then the spears will be inedible.

As a note – white asparagus tends to be more fibrous and tastes stringy when eating, but it’s the best type for preserving. Green asparagus is very tender, but it doesn’t store well. We recommend you grow both varieties and get options for preserving and fresh eating.

Asparagus tips should bet tasty and juicy, and the best ones have purple tips with sharp points. The tip is the best part of the asparagus, it has the most flavor and the best texture. Make sure you harvest before the buds start to open, or the plant will begin to flower, and you won’t be able to eat any flowering spears.

Your asparagus should have green stems with purple spears. Some varieties might have white mixed in with the purple on the tips of the buds. White varieties do well in blanching and preserving.

During the season, check If your spears appear bruised or discolored. If they turn color to red or yellow, it’s a sign of early frost damage to the spears. Remove these spears as you won’t be able to eat them.

It’s essential to protect your asparagus plant from the frost. Frost damage will make the spears turn limp, and they feel soft and mushy between your fingers. Frost-damaged spears are no longer viable, and you should cut them back before they attract disease and pests to the plants.

How Do I Harvest Asparagus?

As mentioned, the first season doesn’t bring you any spears. However. You can expect some edible spears in the second season, and after that, they get better every year. 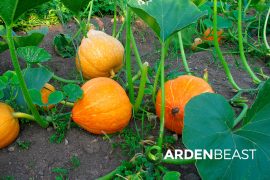 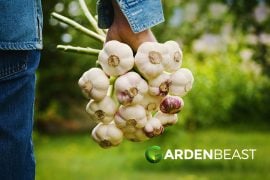 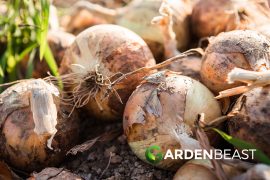