How to Plant And Grow Chicory: Complete Guide

Our complete guide to growing Chicory at home - Everything you need to know from planting to caring for your Chicory to harvesting.

By Hollie CarterFebruary 16, 2022
Chicory
Affiliate Disclosure: We independently test & research all products reviewed on the site. We may earn a small commission if you buy through one of our links. This does not affect our reviews or placement of products on the site.

Are you trying to stop drinking coffee? That sweet jolt of caffeine in the morning is something more than 60% of Americans enjoy. However, a price comes attached to the pleasurable experience of drinking a cup of coffee. The afternoon jitters and rising anxiety after having one cup too many are something we’ve all experienced.

Chicory presents you with an interesting coffee alternative. Drying out the roots of the plant and roasting them gives you a flavor experience that’s similar to coffee, without the caffeine crash attached. The chicory isn’t exactly an ornamental plant worth putting on display in your flowerbeds.

The chicory plant doesn’t produce attractive foliage or stems, but the flowers are somewhat cute in appearance. The leaves, roots, stems, and flowers of the plant are edible, and it’s a better choice to plant in the veggie patch rather than in flowerbeds.

This perennial reached lands across the globe thanks to its beneficial nutritional properties. You’ll find chicory growing in Lands across the Northern and Southern Hemisphere. The chicory plant seems to adapt to a range of environmental conditions.

With humans cultivating the plant for thousands of years, there are several varieties available. Some cultivars are leafier versions, such as the curly endive, Belgian endive, sugarloaf, and the radicchio.

It’s easy for gardeners to confuse endives with the traditional chicory plant. The United States variety is the leafy vegetable chicory, and it’s not the same thing as the coffee substitute we’re talking about in this guide.

This guide gives you everything you need to know to grow chicory at home.

Growing and Caring for Chicory

The chicory plant is a self-seeding perennial native to the United States. The plant grows readily across USDA Zones three to ten, making it a versatile plant to grow in any climate. However, the chicory doesn’t do well in high heat, so planting in Southern Florida, Puerto Rico, and Hawaii won’t see the same root production as in cooler climates.

The plant produces flower-bearing stems that reach heights of up to three feet. The foliage on the plant features a toothed appearance, with the larger leaves at the bottom of the plant. Flower colors range from dark to light hues, depending on the level of sun exposure the plant receives and the age of the chicory plant.

Typically, the chicory blooms from June through to September. Each flower head on the plant produces a cluster of flowers, forming five-sided petals that create a floret. The flowers open and close with the sun’s movement, much like the other plants in the aster family.

The flowerheads open at first light, and they close in the late afternoon. The color of the flowers also seems to change during different lighting conditions during the day. In the morning, the chicory appears a dark-lavender color, lightening in color throughout the day.

The tops of the stamens gather white pollen during the morning, and the butterflies and bees enter your yard to feed on the pollen. The flowers don’t last long, drooping and falling from the plant after a few days.

In the late fall, pollinated flowers may develop fruits. The fruit falls to the ground, spreading seeds. Leaving the chicory alone in your garden may see the occurrence of more plants the following growing season.

Similar to its cousin, the dandelion, the chicory grows a long taproot, and the flowers, stems, and leaves of the plant are edible.

Read through these growing tips to get the most out of your chicory plants this growing season.

Make sure the soil in the planting site is loose and full of nutrients. The ground needs to drain well, as the chicory doesn’t like “wet feet.” Waterlogging the soil results in the onset of root rot in the plant. We recommend making some amendments to the planting site using fertilizer and perlite.

You can start your flowerbed or container preparations in the early spring. Make sure that the last frosts pass and that daytime temperatures average 65F. Before planting, remove all the weeds and loosen the soil using a gardening fork.

Work some compost into the soil, and dig the bed to a depth of eight inches. Build 1/16″ furrows along your beds, spacing them two to three feet apart for the best results.

Scatter your seeds in the furrows, with at least two seeds for every square inch. Lightly cover the seeds with soil and water. Moisten the ground, don’t waterlog it. We recommend using a sprayer for the task to reduce effort. 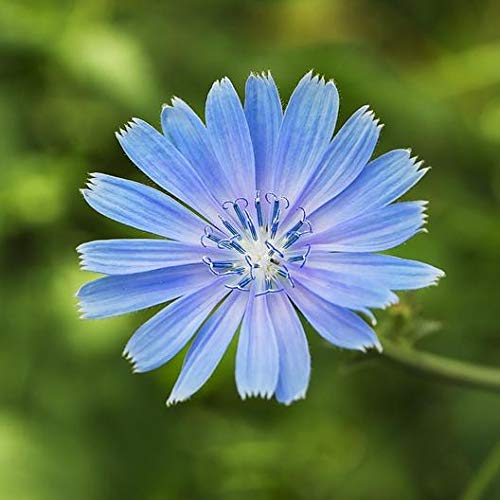 After planting, mulch around the plant base with organic material like leaves and other composted debris.

Mulch serves several purposes for your plant. It stops light from getting to the soil, preventing weed growth.

Mulching also retains moisture in the soil, keeping your chicory happy and healthy. When watering, the mulch breaks down, returning organic nutrients to the ground.

Spread a 2-inch thick layer around the plant base and repeat the mulching three or four times during the growing season.

Gardeners can add more compost when the plants reach a height of four inches. Add more of the compost in the late summer to spur root production.

The chicory likes a good watering during the week. It’s important not to let the roots dry out. Drought affects the plant’s production and growth.

Gardeners can water their plants once a week. If you overwater the chicory results in the roots turning fibrous and bitter, ruining your crop.

Gardeners should deadhead the flowers after they emerge in the summer. Pruning the flowerheads helps to entice root growth. We recommend deadheading as early as May.

Chicory is a hardy [plant, and you’ll often see it growing on roadsides in rural areas. When propagating chicory, most gardeners choose to start it from seed since the roots are the most valuable part of the plant. Follow this guide for propagating your chicory plants from seed.

Starting your chicory plants from seed is affordable. It’s a great way to give yourself an inexpensive supply of coffee alternatives. Gardeners should sow their chicory seeds in the early spring after the frost passes.

When planting out in the garden, make sure you work the soil. The roots need to spread out wide and fill up. Growing chicory in compacted or clay soils results in small roots, small plants, and a small harvest.

Make sure you keep the soil moist while waiting for the seeds to germinate. Typically, it takes around two to three weeks for germination to occur. Gardeners don’t have to worry about soaking seeds before planting, but it helps spur faster germination if you do soak the seeds.

Make sure you’re planting in stable environmental temperatures between 40°F to 85°F. 70°F provides you with the optimal temperature for germination. Gardeners can plant a second round of chicory in the mid-summer, provided the temperature doesn’t exceed 85°F.

Chicory plants don’t have to deal with many problems caused by pests and disease. However, there are a few that the gardener must look out for during the growing season.

Aphids are the biggest problem for chicory gardeners. However, they are easy to remove from your plants. Spray down the flowers with a diluted neem oil solution. The aphids hate neem, and they’ll vacate the plant.

Gardeners need to look for the following signs of disease in their chicory crop. If you discover any disease, trim away the affected parts of the plant and throw them in the trash. You’ll need to pull up and discard any plants that don’t recover.

If you’re harvesting chicory for its roots, dig up the plant in the first year after the plant has its first bloom. In most cases, that’s around 120-days after planting chicory seeds. Leaving the plant for a second year turns the roots woody, and they won’t suit use in hot drinks.

Clean the roots and cut them away from the plant. Rinse them clean, and place the roots on a baking sheet. Roast the roots in the oven at 325°F until dark brown. This process may take up to an hour, depending on the thickness of the roots.

You’ll know the roots are perfectly roasted when you smell a coffee scent in the air. Remove the roots from the oven and let them cool before grinding them up for a coffee substitute.