How to Plant And Grow Armenian Cucumbers: Complete Guide

By Hollie CarterFebruary 16, 2022
Armenian Cucumbers
Affiliate Disclosure: We independently test & research all products reviewed on the site. We may earn a small commission if you buy through one of our links. This does not affect our reviews or placement of products on the site.

Cucumbers are famed for the myriad of health benefits they offer; however, if you don’t enjoy the taste, that doesn’t mean you have to forego the wealth of nutritional benefits that this fruit offers. Why? Well, because there is a type of cucumber that has a sweeter, crisper, and more palatable flavor. What is it? An Armenian cucumber, of course!

To learn more about the unique Armenian cucumber plant and how you can grow these crops yourself, keep on reading.

Armenian cucumbers are a bit needier than other types of crops. Due to the long vines, and because they should be grown above ground level in order to achieve optimal length and flavor, they do require more care. With that said, however, with the right tips and diligence, you can successfully grow them in your own garden.

It’s best to grow Armenian cucumbers vertically. Not only will doing so allow you to keep the long, winding vines under control, but it will also promote healthier, tastier fruits. Additionally, growing these fruits vertically will save a tremendous amount of space in your garden, and there is less of a risk of pests and diseases, as most pathogens and harmful bacteria that could damage the cucumbers reside in the soil.

To grow Armenian cucumbers vertically, choose a sunny location in your garden. Use a cucumber trellis and supports. As the vines begin to sprout, train them to travel up the trellis. They do best in moist, well-drained soil, and while they don’t necessarily need fertilizers to grow, adding organic fertilizer can promote larger yields of healthier fruits. Organic fertilizers are slow releasing, and as such, the plants will receive a constant supply of essential nutrients, which will promote larger, more robust cucumbers.

Armenian cucumbers can also be grown in containers; however, do note that a large container will be needed; at least 16 inches in diameter is recommended. Make sure that the pot has drainage holes, and use high-quality, well-draining soil. Feed the soil with fertilizer prior to planting the seeds or seedlings to make the soil more fertile. Keep in mind that container soil dries out faster than garden soil so you’ll want to keep a close eye on the soil, and water whenever it appears dry, as Armenian cucumbers do not tolerate dry conditions; they will shrink and the leaves will turn yellow.

Armenian cucumbers do best when they are exposed to hot conditions for prolonged periods of time. In order to achieve germination, the temperature has to be greater than 50 degrees F, and once germination does occur, the plant requires a minimum of 55 days of frost-free conditions in order to produce fruit. Directly sowing the seeds is preferable for growing, Choose a location that receives ample sunlight, and the soil should be nutrient-rich. Once planted, apply natural fertilizers about a month after seedlings have emerged. 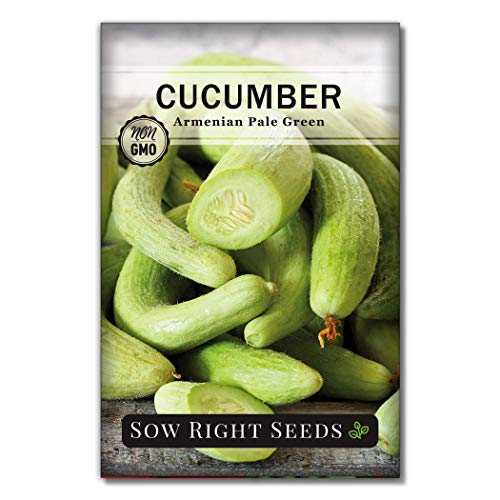 When grown in proper conditions, Armenian cucumbers require minimal care; however, in regard to watering, they do need a consistent supply of moisture. This is particularly true once fruits emerge. Check the soil on a regular basis and water when the very top layer feels dry. Apply water to the roots of the plants, as overhead watering can encourage the growth of a powdery, downy-like mildew. If the roots dry out, the fruit will not flourish, and eventually, the plants will completely perish.

How to Propagate Armenian Cucumbers

Propagating Armenian cucumbers is relatively easy, as they are open-pollinated. As such, at the end of the growing season, remove fully matured fruits from the vines. Remove the seeds buy cutting the fruits into two vertical pieces. Use a spool to scoop out the seeds, place them in a strainer, and use fresh water to remove any pulp and flesh from the seeds. Place the seeds onto a piece of newspaper and allow them to dry out completely. Place the dried seeds in an envelope, and store them in a cool, dry place. Plant them at the start of the next growing season. Use the above-mentioned tips to plant and grow your propagated Armenian cucumbers.

If you are looking to grow a fruit that offers nutritional benefits that are similar to cucumbers, but that have a sweeter flavor and a crispier texture, Armenian cucumbers are a great choice. These fruits are much larger than traditional cucumbers and have a unique curved appearance. They’re also sweeter and crunchier than their traditional counterparts. Armenian cucumbers taste great when eaten alone, as a healthful snack, work well in a salad, and can even be pickled. If you’re interested in attempting to grow this type of fruit on your own, the tips and information discussed above will help to put you on the path to success. Harvest your Armenian cucumbers when the fruits have a yellowish hue on the skin, or when they are about 12 to 18 inches long. Once picked, refrigerate the fruits until you are ready to consume them.