Yarrow Guide: How to Grow & Care for “Achillea Millefolium”

Our Guide to Yarrow Plants for everything you will ever need to know! Tips for planting & caring for “Achillea Millefolium”

By Miruna SecuianuMarch 2, 2022
Yarrow Guide: How to Grow & Care for “Achillea Millefolium”
Affiliate Disclosure: We independently test & research all products reviewed on the site. We may earn a small commission if you buy through one of our links. This does not affect our reviews or placement of products on the site.

Achillea millefolium is a carefree plant native to North America, popular with pollinators and gardeners who want to create a laid-back relaxation space in their backyard. Yarrow plants have been around for quite some time. In Ancient Europe and Asia, Achillea millefolium was sought-after for its medicinal, culinary, and magical properties. The name ‘Achillea’ comes from the Greek legend of Achilles of Troy who used the herb to treat his wounded soldiers and stop the bleeding.

This perennial flower goes by many names, such as ‘Soldier’s wound wort’, ‘Nosebleed plant’,’ Knight’s milfoil’, ‘Old man’s pepper’, ‘Sneezewort’, and ‘Herbe de St. Joseph’. In Southwestern U.S., it’s often called ‘plumajillo’, due to its feathery foliage. Yarrow is a hardy and versatile plant, making it perfect for open meadows, borders, and ground covers. Moreover, it is drought-resistant, pest-resistant, great for cutting and drying, and it attracts pollinators.

Achillea millefolium is also an aromatic herb, its dried leaves and flowers can be brewed to make a sweet, mildly bitter tea, infused into oils, or preserved in tinctures. If you want a beautiful, low-maintenance ornamental plant that has a lot to offer, the Common Yarrow could be an excellent choice for your garden.

From this article, you’ll learn how to cultivate, propagate, and maintain Yarrow Plants in your garden.

Achillea Millefolium is easy to grow and low-maintenance, making it a great project for beginner gardeners. This sturdy flower requires little effort and will thrive even in dry gardens. However, Yarrows do not appreciate wet soils, so make sure the soil is well-drained and it does not sit in water for too long.

A. Millefolium loves sunlight, and although it can grow in partial shade, it will do best in full sun.  If the plant doesn’t receive enough sunlight, the stems become long, thin, and floppy so you will have to stake them.

Too much shade can lead to diseases such as botrytis mold and powdery mildew. Both will appear as white powder on the foliage. Luckily, this is mostly a cosmetic problem, so your plants are unlikely to die from it. You can apply a fungicide to treat this problem. Yarrows are usually pest-free, though they are susceptible to spittlebugs. If you notice a large number of these bugs, hose them off with water and then apply an insecticide under high pressure.

The Common Yarrow is an excellent choice for cottage gardens and mixed borders. You can plant it in groups of five and choose the colours that you love most. Dwarf kinds are suitable for rock gardens and as ground cover. They add a natural, wild charm to informal gardens and attract insects such as butterflies.

Some Achillea Millefolium varieties spread quite aggressively by growing underground rhizomes. These rhizomes can create heavy mats of foliage and roots, which can be a good thing if you are looking to suppress weeds. However, other plants you are trying to grow in the garden can be affected. If you are worried about this, choose a less aggressive variety and plant where you can easily contain the spread.

Yarrow plants need to be pruned regularly so that they can continuously bloom. This also prevents flopping and reduces the plant’s height. Pruning will keep this invasive plant in check by preventing self-sowing. The best time to cut off deadheads is in mid-summer when the flowers start to fade. Dead-heading will encourage most varieties to produce another round of flowers.

Yarrow plants appreciate a sandy, of average to poor quality soil with a pH between 4.0 and 8.0. A 6.4 pH is considered ideal. Although the soil quality can be poor, the drainage must be exceptional. Achillea Millefolium is one of the few plants that don’t prefer fertile soil. Of course, it can survive in organically rich soil, but it will probably grow too fast and become leggy. Avoid fertilizers and instead side-dress with compost once per year.

If you buy it as a mature plant, wait before the danger of frost has passed before transplanting it to your garden. Choose an area that will receive direct sun at least 5 hours per day. Start by loosening the soil with a garden fork about 14 inches (35 cm) deep and add 3 inches (7 cm) of compost. Mix it in well and then add the Yarrow. You should space them 1 to 2 feet (30 to 60 cm) apart so they have room to spread after getting established.

Whether you start with new plants, seeds, tip-cuttings, or divisions, the general rule is that you should give extra water if the garden receives less than 1 inch (2,54 cm) of rain per week. This will help Yarrow plants establish a strong root system. If you get an inch from rain, you can skip additional irrigation.

Once the plants are established, they become drought-resistant. However, in case of a prolonged dry spell, help them out with some water – they will surely be thankful for it and reward you with beautiful blooms and green foliage!

If you love your Achillea Millefolium and just want more of it, you should know that propagating it is easy and rewarding. There are three recommended methods for propagating Yarrow plants: from seed, by division, and from tip cuttings.

If you want to start A. Millefolium from seeds indoors, keep in mind that germination takes approximately 2 weeks. Sow the seed in February or March in seed trays with a well-draining potting mix. Make sure to keep the seeds warm and moist. Once sprouted, you can transplant the strongest plants to individual pots and apply a nitrogen fertilizer.

If the danger of frost has passed, you can sow the seeds directly into the garden, although this will mean getting blooms only in the second year. Keep in mind that seeds dropped by your Yarrow plants may not replicate the traits of the parent. Only true botanical species can produce true seeds. 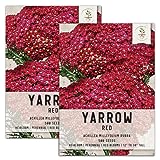 Dividing your Yarrow plants is not only a great propagation method, but it also helps increase airflow and rejuvenate them. Every 3 years or so, divide the plants before new shoots appear or before the growing season starts, usually in late winter or early spring. This is a great propagation method because you make sure you are getting the same traits as the parent plant.

To propagate A. Millefolium from cuttings, take a clean, sharp knife and cut a 6 inch (15 cm) stem of new growth at the fourth leaf node counting from top to bottom. Remove the lower leaves and place the stem into the potting mix. Place it in a sunny, dry location. If new growth is noticeable, the plant has rooted and it is ready for transplanting in the garden.

Achillea Millefolium is a beautiful, no-fuss plant that has a lot to offer, making a great project for beginner gardeners. We love the fact that this sturdy plant requires little to no effort, as it is drought-resistant and loves sunlight. However, there are a few things you should keep in mind when it comes to its care requirements.

The secret to happy Yarrow is poor, well-drained soil and plenty of sunlight. From time to time, your plants might need some extra water, especially during prolonged dry spells. Propagating Achillea Millefolium is easy, although you might get more than you asked for, due to their invasive nature.