Azalea Guide: How to Grow & Care for This Flowering Shrub

Read our guide to Azalea plants for everything you will ever need to know! Tips for planting & caring for these flowers

By Hollie CarterMarch 1, 2022
Azalea Guide: How to Grow & Care for This Flowering Shrub
Affiliate Disclosure: We independently test & research all products reviewed on the site. We may earn a small commission if you buy through one of our links. This does not affect our reviews or placement of products on the site.

Are you looking for a plant that is easy to care for as an amateur gardener? Azalea shrubs are a popular choice for many gardeners, whether they have been doing it for a long time or are just starting out. They appeal in many different ways, such as through their beautiful, vibrant colors and their longevity.

They are widely popular for their blooms, which can come in various shades, as well as their somewhat fragrant scent. This is an excellent shrub to have in the springtime when its flowers reach the peak of their beauty. Having an azalea in your own home or garden will bless you with beautiful blooms throughout the year.

Azaleas belong to the genus Rhododendron. They are said to be mostly native to regions in North America and East Asia. They have been around for several years, having been described in a poem dating back to 772 A.D. The Japanese Azalea was first brought to Holland in 1860 and started to gain popularity across Europe.

The good thing about azaleas is that they don’t have too many growth requirements, albeit they are a bit specific. Azaleas must be planted in acidic soil, which means that it should have a pH level between 4.5 and 6.0.

Aside from this, it must also be planted in soil with good drainage for its shallow roots. A soil that is rich in organic material will be incredibly beneficial for your azalea, as long as it still drains well.

You can create our own organic-rich soil by mixing in a large amount of peat moss to the soil you already have lying around. If your land does not have good drainage, it is recommended to place the shrub on a raised bed.

When it comes to sunlight, it is best to keep azaleas in small amounts of shade, especially when grown in places with warm climates. Although, flowers in colder climates can be left out in the open.

Too much exposure to sunlight can burn the petals, while too little can prevent the plant from getting enough oxygen needed for growth. It is generally recommended to place the flowers in a spot where it can get sunlight in the morning and be in the shade during the afternoon.

This plant can survive well in various temperatures, averaging from 30ºF to 85ºF (-1ºC to 30ºC). Some azaleas, such as the white variety, cannot withstand temperatures above 80ºF (27ºC), or else the blossoms would wither and fall.

It is also essential to keep the azaleas free from pests and diseases. Pest infestations in azaleas rarely occur, but they do happen. Lace bugs are the most common pests. A lace bug infestation can easily be identified as yellow or white foliage along with clusters of these bugs under the leaves.

These kinds of infestations are very easy to treat with common insecticides. When it comes to diseases, deciduous varieties may suffer from petal blight, root rot, and leaf spots, which can be prevented by maintaining proper drainage in the soil and conserving water.

These shrubs do not require too much pruning, and you usually only need to cut off branches that are infected, dead, or are about to die. Additionally, mulching is highly recommended as it protects the root system and keeps the soil moist for longer. 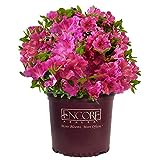 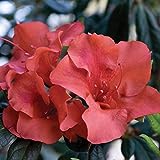 Water requirements may vary between azalea species, as well as the climate and the amount of light that your shrub is exposed to. If it is placed in a colder region or shaded area, it is typically best to water the shrub less, only as often as twice or thrice a month.

In warmer regions, you may need to water it around once or twice a week. Be sure to check the soil moisture before watering as these plants generally cannot tolerate soil soaked with too much water due to its shallow roots, or it will drown.

It is crucial to provide good drainage to the soil to avoid these conditions. It can also be a good rule of thumb to water the plants as soon as the upper three inches of the soil starts drying out.

Azaleas are typically propagated through two methods. The first method involves cutting a part of the stem just a little below the point from where a leaf attaches. Remove all flower buds and leaves from the cutting and dip the end of the cut stem into a rooting hormone.

Then, place the cutting into a well-draining rooting medium at a depth of around one-third of the cutting’s height. Place a plastic bag over the cutting to trap in moisture and position it in an area with bright, indirect sunlight.

The roots should start to develop after two months. You can then remove the plastic covering and expose the plant to direct sun in the morning. The plant can be transferred to a different pot after four months and would have grown enough to be placed outdoors by the next spring.

For the second method, you would need to grow the azalea seeds. This will definitely require more time than the first method, but will surely be worth the wait. Planting the seeds will result in growing new shrubs that could look like either one of its parents or a mixture of both.

Azaleas propagated using the first method will always look like the parent, so this method would be best if you want to have more variety and colors in your garden.

The azalea is a beloved flowering shrub that is not only beautiful but also very easy to maintain. It is easy to see why it has continuously remained as one of the favorite flowers of gardeners.

It can be a wonderful addition to your garden as well as an excellent decorative plant to have inside the house. They are a good option for beginners because they require only a little bit of maintenance and can keep growing through all the months of the year, making it a shrub that is as strong as it is lovely.

Its vibrant blooms will surely be something to look forward to whenever the spring season comes around.