Wild Leek Guide: How to Grow & Care for “Allium Ampeloprasum”

Read our guide to Wild Leeks for everything you’ll ever need to know! Tips for planting & caring for "Allium Ampeloprasum"

Allium ampeloprasum, commonly known as wild leek, broadleaf wild leek, or elephant garlic, is a group of hundreds of different bulbous biennial flowering plants. It belongs to the Amaryllidaceae family, which has around 1600 different species divided over an impressive number of approximately 70 different genera. The genus the wild leek falls into is Allium, making it closely related to onions.

All the parts of the elephant garlic can be eaten, and some people consider them to be very tasty, but they should be eaten in moderation. These flowering plants are not only grown because they might enable you to make some very interesting salads and teas, however, but also because they are beautiful to look at.

These wild leeks, which are biennials, are fairly easy to grow and care for once you know how — but before you consider adding Allium ampeloprasum to your garden, there are some things you need to be aware of.

Wild leek is generally grown in gardens. If you do not have much space available, it is also possible to grow elephant garlic in container gardens, so long as the roots have plenty of space to develop. Once planted, Allium ampeloprasum var. ampeloprasum is not too difficult to care for.

Wild leek needs to be placed in a location where it will consistently receive full sun — meaning at least six hours of sunlight a day, and preferably even more. While wild leeks will survive in partial shade, too, the bulbs that result during the second year will be smaller and may not divide into bulbils. The flowers, too, will be less impressive in this case. Elephant garden can be planted in warmer temperatures, where these plants can flower year-round, or in temperate or cooler climates with colder winters. In that case, they will begin their growing season during the early spring. Wild leek can withstand periods of frost without any problems.

For your Allium ampeloprasum var. ampeloprasum to thrive, you will want to ensure that the plant is placed in consistently moist soil — because elephant garlic needs a lot of water to succeed. This soil should be nutrient-rich and well-draining, however; wild leek does not do well when it becomes waterlogged, as the bulbs can begin to rot. A pH neutral soil is ideal for your elephant garden, and these plants love loamy soil, too. 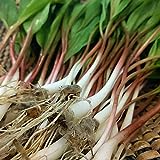 Elephant garlic and other Allium ampeloprasum species are undemanding in terms of fertilizer. A natural compost serves your wild leeks’ nutritional needs just fine. Add a layer of compost to your elephant garlic right after planting a bulb, and so so again the following spring to prepare it for an abundant growing season and a beautiful bloom.

Wild leeks do not need to be pruned, as such, but they can be harvested. Should you be interested in adding elephant garlic to wildflower salads, you can remove some of the foliage, harvest the flowers, and also harvest the bulbs and stems. The corms are likewise edible.

Because slugs enjoy these plants, too, you might like to add a layer of mulch, away from the stem, to protect your elephant garlic. If you are intending to eat any parts of your wild leek, using pesticides to control possible pests is not a good idea.

Wild leeks thrive in moist conditions and depend on supplemental watering, unless you live in an extremely rainy region. When you first plant your wild leek, make sure to water it often to help it mature nicely — so long as you have a well-draining soil type, which will take care of any extra water for you. Water your wild leek to the point where you feel the top of the soil is lightly moist but make sure not to “drown” the plant in water.

Elephant garlic is well-known for simultaneously requiring fairly heavily moist soil and also coping very poorly with being waterlogged. Should your plant sit in soggy soil, you run a significant risk of bulb rot, causing you to have to start the growing process all over again! Water your elephant garlic plant every morning for best results.

After your wild leek is well-established, it won’t need as much water as a baby plant. Still keep the wild leek moist but water less frequently. If your region experiences regular rainfall, supplemental watering may not be necessary at all.

Propagating elephant garlic and other species of wild leek is a little unusual, in that it is easiest to grow these flowering plants from their bulbils, the cloves into which mature bulbs divide in their second year. The bulbs should first be divided into cloves, for which you need to remove the outer shell.

Elephant garlic requires a cool period before the bulbs can be activated, and this is why their bulbs are typically planted just before the spring arrives, giving them access to temperatures between 32 50 °F (0 to 10°C) for a few weeks. People who live in regions with wet rather than cold winters can start the bulbs indoors and transplant them to the garden in the spring.

Here’s a step-by-step look at the entire process of planting elephant garlic:

Wild leeks encompass an entire genus, featuring five species classified as vegetables. Of all these species, which are related to onions, Allium ampeloprasum var. ampeloprasum — sometimes known simply as “wild leek”, but more precisely called elephant garlic, is one of the most interesting.

These beautiful plants are edible and repel many pests, but also brighten your garden up with their amazing spherical flower clusters in their second year of life. Caring for newly planted elephant garlic can be a little challenging, but once these plants take root, they will easily continue to spread. Harvest their bulbs from time to time to make sure they have ample space to keep growing, and you will be able to enjoy elephant garlic for many years.

Dill Guide: How to Grow & Care for “Anethum graveolens”