It doesn't take much effort to fall in love with the spiral aloe — just a single glance at a picture will usually do the trick. If you're lucky enough to acquire one, you will of course want to know everything there is to know about giving the spiral aloe the best possible care.

By Hollie CarterJune 4, 2022
Spiral Aloe
Affiliate Disclosure: We independently test & research all products reviewed on the site. We may earn a small commission if you buy through one of our links. This does not affect our reviews or placement of products on the site.

Every plant is special in its own way, but Aloe polyphylla is unquestionably unique. Commonly called the spiral aloe, many-leaved aloe, or (in its native zone) kroonaalwyn or lekhala kharetsa, this aloe is a stemless flowering succulent that represents mathematical perfection.

The spiral aloe belongs to the large Asphodelaceae botanical family, which incorporates about 40 genera, and it comes as no surprise that it’s a member of the Aloe genus.

It doesn’t take much effort to fall in love with the spiral aloe — just a single glance at a picture will usually do the trick. Unfortunately for gardeners who would almost be willing to commit a crime to get their hands on an Aloe polyphylla plant, these plants are in very high demand and rather rare.

If you’re lucky enough to acquire one, you will of course want to know everything there is to know about giving the spiral aloe the best possible care. If you’re not, this guide can still give you something to dream about.

About the Spiral Aloe

The spiral aloe is a high-maintenance plant that is difficult to care for; it is highly sensitive to its environmental conditions, and will quickly begin to protest if it is grown outside of its native zone. Can you provide a spiral aloe with a suitable home? Learn about its care first, and embark on the long and arduous path of finding one later.

The spiral aloe plant needs plenty of bright sunlight to thrive, but should be kept safe from the scorching afternoon sun. When grown as a houseplant, Aloe polyphylla can be placed in a spot where it will be able to enjoy bright and direct sunlight for much of the day, while receiving some shade in the afternoon when the sun is at its brightest and hottest. This usually means that the spiral aloe should be placed near west or south facing windows.

Given the fact that the spiral aloe comes from Africa, gardeners will not be shocked to learn that these succulents are not frost hardy at all and will die if exposed to freezing winter temperatures for any length of time. They may, however, be quite surprised to hear that spiral aloe plants don’t appreciate temperatures that exceed 80 °F (27 °C).

In addition to these basic requirements, spiral aloe plants should also be kept away from strong winds (easy to do if you’re growing one as a houseplant) and high humidity levels. If you live in a more humid climate, installing a dehumidifier will be a must if you plan to grow and care for a spiral aloe.

Aloe polyphylla naturally grows sandy soils at high altitudes, and should be placed in a similar soil designed especially with succulents in mind when it is grown inside the home. Adding a sprinkling of pumice stones to the potting mix ensures that your spiral aloe can receive the air its root system needs.

These plants do not need to be fertilizer, as they are used to growing in poor soil, and should not be pruned either. However, Aloe polyphylla will need to be repotted occasionally — once every two or three years should be sufficient. 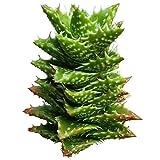 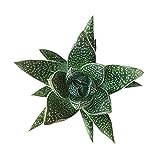 Most succulents don’t need much water to thrive and some are even extremely drought tolerant. The spiral aloe is no exception. Spiral aloes not only survive in dry conditions but actually require them, a fact that applies to the relative humidity in the air as well as the soil.

Overwatering this succulent could cause many issues — including root rot, which could kill your rare spiral aloe!

To ensure that your spiral aloe plant doesn’t get too much water but also has plenty to thrive, let the soil dry out before watering it. This applies to your plant especially in the fall and winter, during which time you’ll want to water your spiral aloe even less. Planning to grow a spiral aloe outside? It’s best to grow it in a container if you live in a place with a lot of rainfall, so that you can move your Aloe polyphylla indoors when it rains.

One of the biggest mistakes that people new to growing a spiral aloe make is overwatering it. Avoid this at all costs, and you’ll make sure that your spiral aloe lives a longer and healthier life.

Propagating the plants in the aloe genus is a little different from how you’d propagate other plants. Aloe plants will often grow offshoots that are often called pups, which can be used for propagation. Like many other aloe plants, the spiral aloe will have the highest chance to succeed when propagated through pups. Not only is this method extremely reliable, but it is also easy to do, even if you are new to propagating.

Though there are other methods of propagating a spiral aloe, like through leaves and seeds, they are much more difficult and often end up failing. This is why propagating through pups is the most popular method for propagating aloe plants.

Want to know exactly how to propagate a spiral aloe through pups? The steps you’ll need to take when propagating your spiral aloe are:

Those who are fortunate enough to acquire a Aloe polyphylla plant may be a little intimated — this isn’t just a high-maintenance plant, but also a rare one. With the right love and care, though, your spiral aloe can absolutely thrive, to the point where you can propagate it and help preserve this wonderful species.

Euphorbia Milii Guide: How to Grow & Care for “Crown of Thorns” Plant

How to Grow Succulents from Seeds: Complete Beginner’s Guide

Crassula Buddha’s Temple Guide: How to Grow & Care for this Succulent