By Hollie CarterMarch 21, 2022
Red Veined Sorrel
Affiliate Disclosure: We independently test & research all products reviewed on the site. We may earn a small commission if you buy through one of our links. This does not affect our reviews or placement of products on the site.

A knockout in border and island gardens, red veined sorrel, also known as “bloody dock”, is an edible ornamental plant that grows in thick clusters of bright green leaves that are variegated with deep red-colored veins that run through the center and extend out toward the each of each leaf.

These plants serve double-duty, as they aren’t just aesthetically pleasing, but they can also be grown, harvested, and eaten. The tart lemon-like flavor tastes delicious mixed in with other greens and veggies as salads, served as an accompaniment to sandwiches, and as an edible garnish for soups. The leaves can even be made into a delightful pesto. As if being visually pleasing and edible wasn’t enough, red veined sorrel is also has the healing properties of an herb. It really is quite a remarkable plant.

Easy to grow from seeds in both flower beds and container gardens, red vein sorrel will add beautiful interest to your landscape, patio, deck, porch, or even your indoor garden. When they reach full maturity, the tender leaves can be harvested and enjoyed as tasty, healthful treats. Interested in learning more about this perennial plant, including how to successfully grow it? If so, keep on reading!

Generally speaking, red vein sorrel or bloody dock (whichever you prefer to call it) is easy to grow and maintain. This is true when grown outdoors in garden beds or in containers indoors or out. They’re hard in USDA zones 4 through 8; however, they can be grown successfully as annuals in other zones, as well.

All varieties of sorrel prefer well-draining, nutrient-rich soil with a pH level of 5.5 to 6.8. Bloody dock does best in full sun for around six hours a day; however, it can tolerate partial shade. You can also grow bloody dock in containers. Make sure to choose a pot that has drainage holes and is at least six inches wide. 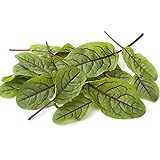 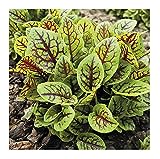 Sow the seeds in a nutrient-rich, well-draining soil. For most of the year, the containers should be in full sun; however, during the summer, move them to a location where they will receive light shade. To help retain the moisture content in the soil, place mulch around the base of the plants, and keep the soil moist, but not drenched.

Throughout the growing season, red vein sorrel should receive about 1 inch of water each week. When watering, be sure to use a direct stream and apply it toward the soil line. Avoid splashing the water up onto the crown. If the leaves get too wet, fungal diseases can develop or rot can occur.

Since red vein sorrel offers several healing properties, it is commonly used as natural medicine. It’s also a versatile, tasty, healthy food that can be consumed in so many ways. Whether you’re planning on growing it for medicinal purposes or for an organic, healthful food, when planting red vein sorrel, a “cut-and-come-again” approach is a great option. By taking this planting approach, you will be able to easily access the crop.

These plants respond very well to being harvested; the more you pick, the more they will grow. To plant as a “cut-and-come-again” crop, use the following tips:

If you prefer, you can grow individual red vein sorrel plants. To do so, begin by repeating steps 1 through 5 in the above section; however, rather than scatter sowing or planting 1 to 3 inches apart, sow the seeds so that there’s about 8 to 12 inches of space between. When smaller sprouts in each bunch emerge, thinning them out is a good idea.

Note: don’t just toss the thinned sprouts; instead, mix them into a salad, steam them, or just nibble on them, as those small sprouts will be packed with flavor and tons of vital nutrients.

As red vein sorrel matures, it can become rather large, reaching an average size of about 24 inches by 24 inches. If individual plants start crowding one another, move them around. When the plants are crowded, they won’t have enough room to spread out, and they will compete with each other for nutrients, moisture, and sunlight, which means they won’t thrive. When you’re moving the plants, be sure to dig deeply around the root zone so that you can grab the entire root system.