Papyrus Plant Guide: How to Grow & Care for “Cyperus Papyrus”

Read our guide to Papyrus plants for everything you will ever need to know! Tips for planting & caring for “Cyperus Papyrus”

Cyperus Papyrus, commonly known as Paper Reed, Papyrus Sedge, Nile grass, Indian Matting plant, or simply Papyrus, is a type of aquatic flowering plant from the Cyperaceae family. Papyrus plants were originally grown in the tropical regions of Africa, around the Nile river, and as of late, they have become highly cultivated as ornamental houseplants.

These plants have very old and well-known uses among their close relatives in the history of Ancient Egyptians. They are the source of what we learn about in history class – the papyrus paper, one of the first types of paper that humans ever made. Moreover, their buoyant stems served as an excellent natural material in the manufacture of reed boats, baskets, mattresses, sandals, mats, and rope.

Although there is no scientific evidence of Papyrus plants being effective in medicine, they were very popular in traditional practices in the past. Ancient Egyptians used the ashes of burnt papyrus sheets as a treatment for certain eye diseases and the spread of malignant ulcers. It was also believed that if the ashes were macerated in vinegar and burnt, they could have healed wounds.

Papyrus plants are used to the mushy environments from their natural habitat, so they will thrive in areas that simulate those conditions. They are low-maintenance and easy-going plants if you manage to find a sunny place and plant them in a fertile soil that is constantly moist.

These evergreen plants are usually planted by rhizomes in a pot filled with suitable damp soil and submerged in aquatic mediums. However, they can also be planted outdoors in muddy soil at 3 feet (0.9 m) deep to help in keeping their heavy stems upright.

Despite their umbrella-like features, Papyrus plants do not hide from the sun at all. They are light-feeders that enjoy full days in bright and indirect sunlight, but will also tolerate partial shade. If you live in a region with hot climates, it is suggested to grow these plants in a location with bright, indirect light or partial shade. A sun that is too harsh will burn their foliage and this may cause irreversible damage to your plants. 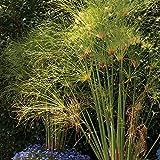 They grow happy and healthy in a soil that is constantly wet or soggy. For optimal results, Papyrus must be planted in swampy locations including rain gardens or landscape ponds. If you want to grow them in a container, they do well in most types of soil, such as clay, loam, or sand.

These plants can also grow in a commercial potting mix, but you will need to provide them with additional organic matter. When first planting your Papyrus plants, feed them with a balanced liquid fertilizer at one half the recommended amount. During the spring, they will benefit from regular feedings with a fertilizer diluted at ½ strength once a month. It is better to fertilize your plants when watering to avoid any potential burn.

They are typically grown as annuals by most gardeners. If you prefer them as perennials, Papyrus plants require pruning occasionally. Make sure you cut their foliage back to the ground level in autumn or early spring to induce new growth and keep them vigorous.

Generally, Papyrus plants have no harmful pests or diseases, but they can be affected by rust fungus. This disease will damage the foliage, discoloring their stems and leaves. If you notice any signs on your plants, you can treat them once a week with neem oil, a dusting of sulfur, or baking soda sprays.

The best thing about papyrus plants is that you can’t overwater them. As long as you keep their roots always wet, your papyrus plants will be happy. They love lots of moisture, so you should check their soil frequently to make sure you provide them with plenty of water. If you live in a region with dry or hot climates, these plants may need watering once every day. During the winter or cooler months, you can water your Papyrus plants less often.

Although it is pretty impossible to over-water these plants in proper environmental conditions, in winter they might receive more water than needed. This will result in root rot and your plants may never recover. Moreover, under-watered plants will start to produce brown spots on their foliage or yellow to brown stems.

Due to the constant providing of moisture, Papyrus plants do not require extra humidity. These watering conditions will create a mini-ecosystem in which the humidity levels will rise around your plants naturally.

If you grow Papyrus plants as perennials, they need to be propagated through division. You do not have any extra space for more plants in your home or garden? No worries! You can always gift these peculiar specimens to those friends who are passionate about ancient culture and history.

Propagating Papyrus plants through divisions is not as hard as you would imagine. Their root clumps can be easily separated into more babies and transplanted in their own pots. They can be grown and cared for as usual with no extra demands. Keep in mind that these plants respond best to propagation if the process is done in spring.

Papyrus plants can also be propagated using seeds, but it will take more time for them to germinate. Fill a container with fresh soil or potting mix and plant the seeds found in their fruits. For optimal results, place the pot in a sunny and humid location and maintain the soil constantly damp. You can provide the seeds with more humidity by covering the pot with plastic wrap, but make some holes in it to allow air circulation.

Well, these funky-looking plants can be a pleasant landscape filler in every home and garden. Papyrus plants are pretty easy to grow by any type of gardener, requiring only basic environmental conditions and a lot of moisture. Plus! They are an excellent gift for your plant-lovers friends and you have so many varieties to choose from!

Epipremnum Pinnatum Guide: How to Grow & Care for “Tibatib”

What Are the Best Tropical House Plants to Grow? Our Top 10 Picks