Complete Guide to Lithops: How to Plant & Care for “Living Stones”

Lithops are perhaps the most unusual plants on the planet. Affectionately called, “Pebble Plants”, “Living Stones”, “Split Rocks”,  and “Butt Plants” (given their appearance, it’s easy to see how they got these monikers), lithops are succulents that are native to the southern regions of Africa.

Whatever you call them, lithops have become an extremely popular plant among gardening enthusiasts, and even those who have more of a brown thumb than green.

Why? Because in their natural habitats, lithops grow in sandy, highly compacted soil, blazing hot temperatures, and require very little water to thrive. In other words, this genus of succulents can thrive with very little care.

But, while it’s true that lithops don’t need as much attention as more delicate plants, it’s important to note that little care doesn’t mean no care. If you’re interested in adding these truly unique plants to your garden, read on to find out how to properly plant and care for lithops.

Before we discuss how to plant and care for lithops, let’s examine these one-of-a-kind plants. As mentioned, they’re a succulent that’s native to the southern regions of Africa. To get really technical, lithops are a genus of succulents and they’re a member the Aizocea family, an ice plant.

Lithops are short in height, very rarely growing taller than an inch higher than the soil in which they live. Typically, they only feature two leaves, which are very thick, padded, and resemble the cleft of an animal foot or a duo of greenish or gray-brown stones that are grouped together.

Compared to other plants, lithops don’t really have what is considered a “true” stem, as the majority of the plant sits underneath the soil.

Lithops appearance serves a dual purpose. Not only does it help them retain moisture, which is vital in the natural habitats that they grow in, but it also allows them to confuse grazing animals, as their stone-like appearance deters animals from eating them.

Lithops, like most other succulents, thrive in conditions that would be deemed inhospitable to most plants; areas that receive little water, lack nutrients, and are exposed to a great deal of sunlight.

Since most of the plant sits underground, however, there’s little surface for lithops to collect the energy of the sun. As such, they have evolved in such a way that they can maximize the solar energy they gather through “windowpanes” that are located on top of their leaves; hence their unique appearance.

If you’re thinking about growing lithops, knowing the conditions they thrive in is crucial.

Disease generally isn’t an issue with lithops, though if they are overwatered, they can develop rot. Likewise, if they are exposed to cold conditions, they can suffer damage or die. 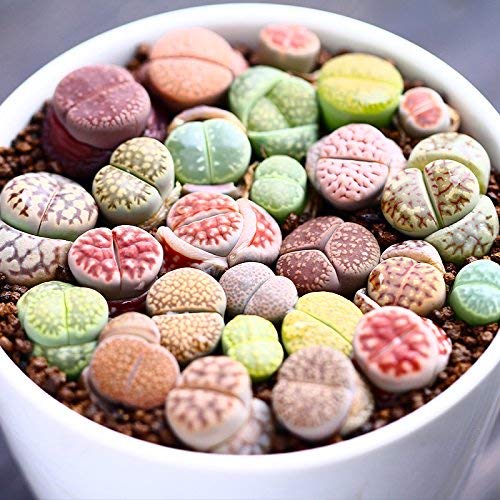 Pack of 10 Colorful Lithops from Amazon

Containers or pots are the ideal spot to plant living stones. As for soil, they should be planted in a pre-made cactus or succulent mix.

If you prefer, you can make your own substrate by mixing together potting soil and sand to mimic the soil that they grow in in their native environments.

When planting them, make sure you choose a container that offers drainage, as lithops cannot tolerate an abundant amount of moisture; in fact, too much moisture will drown these plants. Before planting, wet the soil so that the roots of the plant can absorb the moisture; however, avoid over-saturating the soil.

As mentioned multiple times before, lithops are pretty low maintenance, which means caring for these succulents is pretty easy.

However, there are some basic rules that should be adhered to in order to ensure your plants thrive. In their native habitat, lithops have naturally adapted to extreme conditions: minimal moisture, excessive sunlight, and nutrient-poor soil.

With those factors in mind, here are some tips that will help you keep your lithops in prime condition.

In the southern regions of Africa, where lithops natively grow, they have managed to adapt to very intense sunlight by having the majority of the plant grow underground and only minimal parts of the plant surfacing above the ground.

Therefore, if you are growing these plants inside, you need to make sure that they have access to bright levels of light that can access the chlorophyll that’s housed down deep in the plant underneath the ground.

It’s likely that you aren’t going to pot your lithops as deeply as they would grow in their natural habitat; however, even with minimal soil submersion, they do need access to direct light for at least three hours a day.

Beyond that, these succulents should have access to very bright, indirect light for as long as possible. However, while these plants do like plenty of light, they don’t do well in extreme conditions.

The best location for this plant is a spot where they can receive plenty of early-morning sunlight (which is less harsh than mid-afternoon light). Direct exposure to the sun during the height of the day, when the sun is its strongest can actually wither out the plant. An east-facing location that isn’t blocked by other objects is ideal for this succulent.

While lithops are pretty small in size, their roots are surprisingly long. As such, planting them in a container that offers enough depth to accommodate the roots is essential.

Choose a pot that features adequate drainage on the bottom to avoid over-watering, as excess amounts of water can drown lithops.

Additionally, make sure that the soil you are using in the container is well-draining; just like these succulents would grow in in their natural habitats.

Lithops need to be grown in well-draining soil; just like they grow in in their natural habitat. Ideally, when wet, the soil should dry out in no more than three days.

You can use a pre-mixed soil that’s specifically designed for succulents, or you can create your own soil. 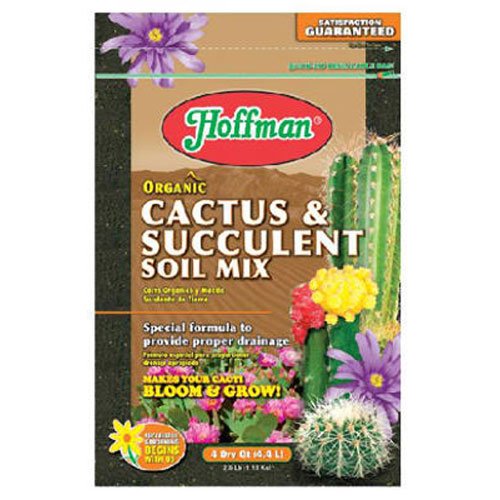 To make your own substrate, blend together equal parts standard potting soil with a porous material, such as ground ceramic, pumice, or shale, to create a substrate that will drain well. If you’re planning on mixing your own soil, choose a potting soil that has minimal amounts of organic material, as lithops naturally thrive in nutritionally poor soil.

Avoid using a soil that contains any brown organic brown matter, as it tends to take a long time to dry out; particularly in humid regions.

When planting your lithops, make sure that you fully submerge the roots of the plants in the soil. The bulk of these plants are housed underground, so if you fail to adequately burry the roots, it’s likely that the plant won’t thrive.

Once the plant is placed in the soil, cover the roots and tamp it. Lithops do best in tightly-packed soil, just like their natural habitat, so you’ll want to make sure that the soil around the roots is densely packed.

Compared to other plants that you’ve probably grown before, watering lithops is quite different. Unlike the majority of flora, lithops only require a minimal amount of water. In fact, if you water them too much, you’ll probably end up drowning them.

So, how do you go about watering lithops? Use the “soak and dry method”, just like you would use for any other type of succulent.

Make sure that you observe your plants; they’ll tell you when they need to be watered. When they start to look puckered or wrinkled, or when they look as if they’ve sunk into the soil, it’s time to water them.

On average, lithops only need to be watered about once or twice a month, maximum; even in the most arid conditions. Watering them any more than that would be detrimental to the health of the plant.

Split Rocks, Pebble Plants, Living Stones; whatever you call them, lithops are indeed, one of the most peculiar plants in nature. They’re also one of the easiest plants to care for, which is why gardeners of all experience levels can benefit from these unique succulents.

Use the information presented above to plant and care for your lithops and you’ll be sure to enjoy a unique display.

Other Types of Succulents 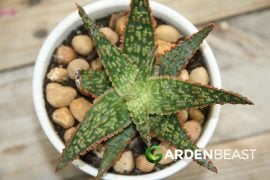 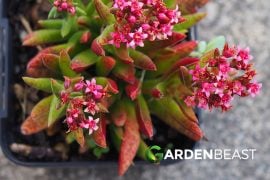 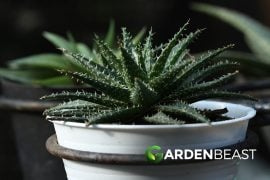 Aloe Brevifolia Guide: How to Grow & Care for “Short-leaved Aloe”