Read our guide to Hypericum for everything you’ll ever need to know! Tips for planting & caring for “St. John’s Wort Plant”

By Miruna SecuianuJuly 1, 2022
Hypericum
Affiliate Disclosure: We independently test & research all products reviewed on the site. We may earn a small commission if you buy through one of our links. This does not affect our reviews or placement of products on the site.

Hypericum is a truly interesting genus that contains almost 500 species of flowering plants. In the gardening world, most species belonging to this rich genus are known by their common name ‘St. John’s wort’. However, some Hypericum species might also appear in nurseries or markets by the common name ‘Goatweed’.

The primary common name ‘St. John’s wort’ refers to the idea that people harvested the flowers of these species on 24 June, the Catholic Saint’s Day, which honours the nativity of St. John the Baptist.

Once they harvest the flowers, the believers would hang them over statues or paintings of St. John in their homes. It was believed that this practice would protect them from evil spirits. Fun fact: the word “wort” means “plant” in Old English.

If you find one of these beauties in nurseries or in a friend’s garden, do not hesitate to bring it home with you! People have been familiar with St. John’s wort plant for thousands of years and over time, this plant has come to symbolize protection and rebirth and it can also be associated with positive feelings of joy, cheerfulness and inspiration.

It is a friendly and super exciting ornamental companion to have around. Although all Hypericum species look somewhat similar at a first glance, a bit of research will prove that each species has its unique personality.

In other words, you have plenty of options to choose from. Thus, we warmly recommend you check as many specimens as you can until you find at least one that suits your taste!

But before you start growing Hypericum a.k.a St. John’s wort, make sure you read this article to learn what this plant needs in terms of its environment.

Despite all worries and expectations, we assure you that the St. John’s wort plant is very easy to grow and care for. This friendly plant can withstand a wide range of conditions regarding sunlight exposure, temperatures, and soil.

Moreover, Hypericum plants perform best with less water than other species of flowering plants. But we will talk about this a bit later!

Keep reading to find out how low-demanding the St. John’s wort plant is and, implicitly, how simple is to meet its needs and spoil it from time to time!

When it comes to lighting, the St. John’s wort plant will have different requirements depending on the region and climate. In the Northern hemisphere, this plant will grow and bloom nicely if you place it in a location where it can experience lots of full sunlight. In the Southern hemisphere, on the other hand, the St. John’s wort plant will have the time of its life only with the conditions of receiving a bit of shade. 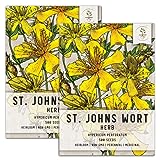 This kind of protection is most efficient during the second part of the day when the harsh afternoon sunlight hits.

The St. John’s wort plant is cold-hardy even in those regions where temperatures drop to (-12). Still, a combination of prolonged freezing temperatures, cold winds, and snow may affect the overall well-being of this flower.

If the winter temperatures in your zone are cold but not as harsh as those mentioned above, you can overwinter your plant by mulching it in autumn. Likewise, we suggest you cover the plant with a plastic bag to protect it from winds. In case you do not want to go through all this fuss, you can also plant your St. John’s wort in a pot and bring it inside before the weather gets cooler in fall.

Luckily, the St. John’s wort plant is generally disease-free. When we are talking about pests, however, some intruders might visit your plant once in a while.

Some of these are aphids, scale insects, thrips, or white flies. If you encounter these issues, you can easily get rid of the infestation by washing your plants and knocking off the intruders. Washing the plants is a great solution for aphids, but for severe infestations, you can also treat your plant with neem oil or another horticultural oil.

Since the St. John’s wort plant tends to grow and spread as it wishes with time, it would be wise to plant it in a spot where it has enough room to develop properly. This will also help you avoid overcrowding other species that grow near it and eventually affect their performance.

In terms of soil pH, the St. John’s wort plant is not as picky as other species of flowering plants. This ornamental species can tolerate a wide variety, from acidic to alkaline types. It usually prefers to grow in soil that comes along with very sharp drainage.

Even if this particular type of growing medium is beneficial for your plant, this does not necessarily mean it is mandatory for optimal growth. The St. John’s wort plant can also do just fine in a compacted ground, but it will not experience the same drainage as with a well-draining substrate.

Although the St. John’s wort plant can grow pretty well in poor soils, it benefits more from fertile growing mediums that are rich in organic matter.

Because of this, you will have to amend your plant’s soil with compost once every year for excellent results. If you are doing this annually, you can basically forget about supplemental fertilizing once and for all without worrying about your plant’s general performance.

In the opinion of many gardeners, the St. John’s wort plant has the status of a weed. But this should not stop you from adding this plant to your garden.

In fact, you can control the growth and spread of this plant by pruning it regularly. You can do this whenever you notice that your plant tends to become leggy or just occupies too much space. This process will not only help you keep a certain size on your companion, but also improve its overall health and performance for the next season of growth.

If you are thinking about growing your St. John’s wort plant in a container, you should know that regular repotting is necessary for best results. However, this is not a hard part of its caring routine. When the plant seems to lack space in its current pot, all you have to do is transplant it into one that is slightly larger, then give it the same care as before.

When the St. John’s wort plants are young, usually during their first year of growth, they will appreciate if you water them regularly and whenever the soil feels dry to the touch.

Once established, these plants become reasonably tolerant of drought and will thrive if you water them when the soil has dried out completely or even less frequently. This makes these plants great additions to rock gardens, gardens that don’t get a lot of rain, and can be easily grown by neglectful or busy gardeners.

Another great thing about the St. John’s wort plant is that you can propagate it through various methods that are easy to do for any type of gardener including beginners. In general, the most common propagation materials are seeds, softwood cuttings, and divided roots.

But enough talking! Let’s show you how you can master these propagation techniques to obtain more specimens for your plant family. And if you feel like it, you can also show your love to one of your family members or friends by gifting him or her a cute St. John’s wort young plant.

To start the plants from seeds, you will first need to collect them from the mother plant. You can sow the seeds whenever you want between mid-spring and early autumn. The seeds will send seedlings in the same way whether you sow them in a pot filled with fresh potting mix or directly in the ground outside.

Either way, you must assure that the growing medium is weed-free and well-dug and the top layer of soil has a crumbly texture. Keep the soil moist and you will notice growth in little to no time.

If you want to use softwood cuttings, you should wait for July or August to do it, as this is when the plant is in full bloom. Look for young, non-flowering stems on your plant and cut about 4 inches (10 cm) off them with a sharp, sterilized knife.

Remove the lower leaves, dip the cut ends in rooting hormone, and then plant each cutting in its pot filled with compost. If you place them in a warm area, cover them with a plastic bag, and keep their soil moist, the cuttings will develop roots in ten weeks or so.

Dividing your St. John’s wort plant through division is super simple and works best if you do it in spring or autumn. All you have to do is lift the plant out of its soil, divide the root ball into two or three pieces, replant each section wherever you want, and water them well.

The Hypericum family of plants are often referred to as St. John’s Wort plants and they are all wonderful and friendly garden companions that can grow in almost any type of soil and don’t need much to thrive. Whether you already have Hypericum species in your plant collection or not, there is always more room for another special ornamental plant. These plants will make your garden more attractive to beneficial pollinators and will also look great with no effort.

Are you growing Hypericum a.k.a. St. John’s wort in your garden? Share your experience with other gardeners by leaving a comment below and let us know what type of Hypericum you enjoy growing and why!

Why Are my Houseplants Dying? Here’s How to Save Them