Read our complete guide to Black Eyed Susan for everything you will ever need to know! Tips for planting and caring for Rudbeckia Plants

By Hollie CarterFebruary 28, 2022
Guide to Black Eyed Susan: How to Grow & Care for “Rudbeckia” Flowers

The Black-Eyed Susan is the posterchild of the late summer season. As August starts to wind down, these cheery Rudbeckias begin to pop up in flowerbeds across the country. These flowers love being out in the full sunlight, stretching its petals to the sky to absorb the rays in the dying days of summer.

These bright, colorful flowers come in shades of orange, lemon-yellow, and gold. The plants bloom for weeks in the late summer, without any need for specialized care. The black-eyed Susan produces a pleasant sweet scent, and it attracts pollinators like bees and hummingbirds to your yard when they start to bloom.

The National Garden Bureau named this wildflower “Plant of the Year” in 2008, putting this species in the spotlight of gardeners around the country. As a result of its popularity, gardeners started cross-breeding different varieties, resulting in some exciting hybrids. Today, you can find the black-eyed Susan in various heights, forms, and colors.

The new hybrid varieties offer plenty of diversification for your garden, and they’re suitable for any style garden, from urban flowerbeds to prairie plots. The Rudbeckia is a proud member of the sunflower genus, (Asteraceae) with daisy-like flowerheads that lean toward the sun.

Also known as the “coneflower,” don’t confuse the black-eyed Susan with purple coneflowers (Echinacea purpurea), as they are an entirely different species. Susans are easy to grow, and they start from seed naturally in the ground after each season.

If you had multiple varieties of colors and sizes in your garden this year, leave them to seed. The following season you’ll have some beautiful hybrid colors popping up from seed as the summer starts to wind down.

What are the Growing Conditions Suitable for Black-Eyed Susan?

The black-eyed Susan vine (Thunbergia alata), is another common form of the plant in gardens across America. This Rudbeckia is unrelated to the coneflower, and it’s a warm-climate perennial plant that’s native to African countries.

Black-eyed Susan grows best in USDA Zones 3 through 9. They like the warm weather, but they perish quickly without water in high temperatures.

What Is the Flowering Period for Black-Eyed Susan?

The Black-eyed Susan has an extended flowering period, showing up in the latter part of summer, blooming for around eight to ten weeks, depending on the environmental conditions. In most cases, the flowers start to appear in late July, early August, and they bloom through until the first frosts begin in November.

Some varieties, such as the ‘Early Bird Gold,’ feature extensive blooming periods. They’ll start producing flowers as early as the mid to late spring, bringing some color to your garden in the early part of the summer.

What Is the Maximum Height of Black-Eyed Susan?

The maximum height of this flower varies, depending on the variety. The tallest flowers reach up to 7-feet in height. This lanky stature makes them an excellent choice for the back of the flowerbed where they can tower above shrubs and smaller plants.

The smaller varieties may only reach 10-inches in height before they start to flower. These plants make great choices for lining the edges of flowerbeds.

What are the Characteristics of Black-Eyed Susan?

The black-eyed Susan is a pretty, flowering plant. The flower heads range from two to nine inches in diameter; and come in single, fully double, or semi-double arrangements. The most common varieties have yellow-gold leaves with black bees in the center.

Other common color varieties include orange-gold, and flushes of bronze, red, or mahogany. The bee or “eye” of the black-eyed Susan is more of a dark-brown color than black on closer inspection of the flower. Some varieties, such as the “Prairie Sun,” feature green eyes.

What are the Common Varieties of Black-Eyed Susan?

There are around 25 different varieties of Rudbeckia native to the North Americas. Many of these species are either short-lived perennials or biennials.

The plants can self-sow, and they’ll return to your flowerbed the following spring. If you mix different colors in your flowerbed, you can expect pollinators to mix up the pollination. As a result, you’ll see hybrid colors spring up in your garden the following summer.

The R. fulgida (orange coneflower), and the Rudbeckia hirta (common black-eyed Susan), are the most widely available varieties in the United States. Some of the other species worth mentioning include the following.

How Do I Plant Black-Eyed Susan?

Black-eyed Susan’s are readily available from your local nursery as bedding plants in the early springtime. However, it’s also important to note that they’re easy to grow from seed as well. Growing from seed also gives you many more varieties to choose for your flowerbeds.

Start sowing your seeds indoors during the early spring, around 10-weeks before the last frost dates in your area (check your local listings for frost dates.) You also have the option of sowing them directly to your garden in the spring or summertime when the ground starts to warm up.

Where Do I Plant Black-Eyed Susan?

Make sure you place your seeds or young Susan’s in a flowerbed that gets plenty of sunlight throughout the day. Susan’s require a well-draining soil with plenty of nutrition. The plants’ roots don’t enjoy saturation or soggy soils, and they’ll start to show signs of root rot from overwatering.

Make sure that your plant in an area that has good air circulation. Plants in close quarters in the cold, rainy conditions are likely to experience an infection with a mildew of white powdery.

Can I Sow Black-Eyed Susan Seeds Directly to My Flowerbed?

Yes, you can sow directly to your flowerbed in the summer after the frosts finish. Sow your seeds and cover them with a thin layer of topsoil.

Separate the plants as they start to sprout, ensuring you leave 6 to 12 inches between dwarf species, and 18 to 30 inches between perennial varieties. Water them well in the first few weeks until they establish root systems.

Can I Sow Black-Eyed Susan Indoors?

As soon as the seedlings emerge, provide plenty of light by placing them on a sunny windowsill or beneath fluorescent plant lights (see Starting Seeds Under Fluorescent Lights).

Before planting your seedlings outdoors, be sure to accustom them to outdoor conditions by keeping them in a cold frame or another sheltered spot for a week. 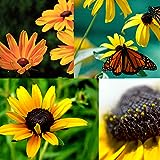 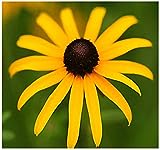 Apart from being susceptible to white powdery mildew, black-eyed Susan’s are resilient plants. If you notice the bottom leaves turning yellow-brown, you have a fungal issue with the roots, probably from overwatering.

Some of the common pests affecting your black-eyed Susan’s are the following.