Our complete guide to growing Quinoa at home - Everything you need to know from planting to caring for your Quinoa to harvesting.

By Hollie CarterFebruary 9, 2022
Quinoa
Affiliate Disclosure: We independently test & research all products reviewed on the site. We may earn a small commission if you buy through one of our links. This does not affect our reviews or placement of products on the site.

Are you a vegetarian or vegan looking to get more protein in your diet? Quinoa, also known as “The Ancient Grain,” is one of the only “complete” plant-based protein sources available to you. Why is it a “complete protein?” because it contains a complete amino acid profile superior to any other grain or vegetable out there.

This broad-leafed plant doesn’t have the same genus as other grains like wheat and oats. Instead of taking the grass-like characteristics of these grains, quinoa is a flower-bearing plant, shooting pretty purple and red flowers as it blooms.

After flowering, quinoa starts to seed, producing its nutritious grain, ready for harvest and cooking. Quinoa has various uses in the kitchen, from making bread and soups to cereals and even alcohol! This post unpacks everything you need to know about growing the ancient grain at home in your veggie garden.

The History of Quinoa – The Ancient Grain

Quinoa has the moniker of “The Ancient Grain” due to its long history in human agriculture. There are references going back some 3,000 years showing people were using quinoa as part of their diet. Native to the South American Andes, quinoa crops now grow in countries around the world.

The Incas revered quinoa, claiming the plant as sacred. The Incan language referred to quinoa as “la chisiya mama,” translating to the “Mother Grain” in English. The Incans held the plant in high regard, with special planting practices governed by the Emperor.

The Emperor would use his “taquiza” or “planting stick” when sowing the seed. The legend shows that this planting stick consisted of solid gold construction, and given the emperor would do the initial sowing; we can see the culture held quinoa in high regard.

At harvest time, the Incas would make animal and human sacrifices to thank the gods for a plentiful harvest. The tribes would brew and ferment the quinoa seeds, turning them into one of the first renditions of beer.

The grain would also provide the Incan army with sustenance, allowing them to march for days with plentiful energy. The soldiers would mix quinoa and animal fat, creating the legendary “war balls,” fueling the Incas conquest of South America.

Quinoa gained a foothold in western diets in the 1970s after Americans brought the grain back from Bolivia to grow in the United States.

Today, quinoa is readily available at western supermarkets, and it’s easy to grow yourself under the right conditions. Let’s unpack everything you need to know about growing the ancient grain yourself.

If you’re thinking about growing quinoa at home, you’ll need to follow these guidelines for the best results with your crop.

It takes quinoa seeds around four to five days to germinate. If you’re starting your crop early, you can sprout indoors around 2-weeks before planting out the seedlings into the garden. Once the plants take to the soil, you’ll have around 90 to 120 days until the grain is ready for harvest.

Quinoa likes the full sun, so plant it where it gets early morning sun and shade in the late afternoon. For the soil requirements, you need well-draining soil with compost amendments to provide extra nutrients to the ground to enhance the sprouting phase.

Mulch as the seedlings reach around 3-inches in height. This activity helps to stop weeds popping up while retaining moisture in the soil and regulating temperature at the roots.

After sprouting your seeds, add them to seedling trays and keep them moist. Plant out the seedlings after they reach 2-inches in height. After the plants establish in the garden, you can water less frequently, but don’t let the soil dry out.

One note – growing quinoa in containers is a lost cause. The plant gets too big for most containers, and you’ll end up having to transplant it, and that might affect the yield at harvest.

Quinoa likes growing in conditions where temperatures range from 25°F during the night to 95°F during the daytime. Quinoa can withstand light frosts, but it might sterilize the pollen on the plant, rendering it useless for breeding.

Planting Out Your Quinoa

After the last frosts finish, you can sow your seeds directly into the ground. Quinoa sprouts easily, and it’s best to plant when soil temperatures reach around 60°F. It’s important to get an early start with your quinoa, as higher daytime temperatures can affect final yields at harvest. 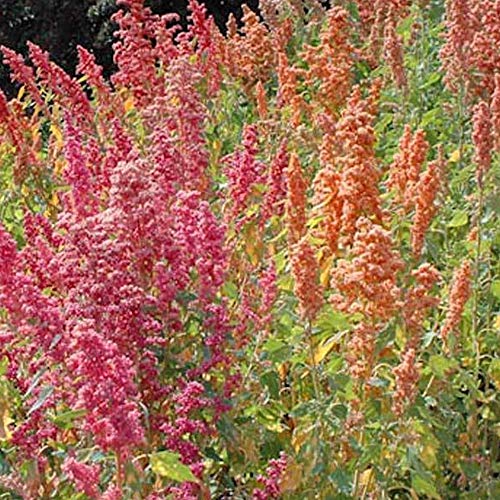 Best Practices to Increase the Harvest

Make sure you keep seedlings moist during growth but don’t overwater. Overwatering results in waterlogging of the soil, leading to the development of root rot in your quinoa plants. Root rot stops the plant from flowering, and it eventually dies.

Keep flowerbeds moist but not soaked. It’s a good idea to let the soil dry out between watering to improve final yields. Quinoa is somewhat drought-resilient, so drying out the earth for two to three days between watering won’t damage the plant or impact the crop at harvest time.

When flowering and producing seed, it’s better to let the plant dry out properly between watering. Keep your watering schedule to twice weekly for the best results. After the seedlings grow to around a foot high, they can battle the weeds in the garden without losing nutrients to their competitors.

Some Interesting Quinoa Facts for the Gardener

Heirloom varieties of quinoa are the best choice for gardeners who want to see the best results. Saving the seeds gives you a consistent crop year after year. Essentially, you can work with a pound of seeds for an acre or 1-gram of seed for a 50-foot row.

Ten plants yield approximately 1-pound of quinoa grain, but your final harvest depends on growing and soil conditions. Quinoa also has a similar appearance to amaranth. The plants have a broad-leaf structure, and they do better in warmer climates, where quinoa is better for cooler regions.

Good news for gardeners; quinoa is deer-resistant, and you won’t find any of them munching on your plants during the growing season. The leaves of the quinoa plant are also edible, making a great addition to fresh garden salads.

Garners will find that quinoa has good resistance to pests and diseases. The seedpods feature a coating of saponin, a bitter substance which deer, birds, and rabbits find unappealing. However, the leaves might experience attacks from aphids, leaf miners, flea beetles, and other insects.

If you notice pests, you can spray down the plants with neem oil to stop infestations from spreading and kill off the bugs. Typically, larger plants don’t feel any impact from minor pest problems.

Gardeners might also experience a few problems with cabbage loopers and moths, but neem oil treatments will take care of these pests. If caterpillars show up, you can remove them manually.

Some gardeners might find that their quinoa is susceptible to diseases. It’s common for pathogens on beets and spinach to transfer to quinoa plants through contact and deliver by leafhoppers or aphids.

Garners also need to ensure they plant in airy spaces where the plants can get airflow between the branches and flowers. If you plant in shady areas and you get a lot of rain, you can expect powdery mildew to show up on your plants.

If you experience rain the week before harvest, let the seeds dry out naturally on the plant before you start harvesting. Harvest the stalks and leave them to dry in a barn, off of the floor. You’ll know the seeds are ready for storage when it’s challenging to dent them with your fingernails.

Using a gloved hand, strip the seeds by starting at the base of the branch, running your hand over the stalk to the tip. Shaking the branches will also cause the seeds to drop. The seeds don’t have any hulls, and they’re ready for storage right off the stalk.

Before storage, spread the seeds out on a black plastic bag on a table in the direct sun for a few hours. This practice removes the rest of the moisture from the seeds.

After you’re confident the seeds are dry, place them in mason jars and store them in the pantry in a cool, dark place. Your quinoa will store for up to 6-months using these guidelines.