How to Plant And Grow New Zealand Spinach: Complete Guide

By Hollie CarterFebruary 24, 2022
New Zealand Spinach
Affiliate Disclosure: We independently test & research all products reviewed on the site. We may earn a small commission if you buy through one of our links. This does not affect our reviews or placement of products on the site.

A perennial vegetable that is grown as a tender annual, despite the name, New Zealand spinach is actually more closely related to the Aizoacea family of plants, which includes some of the most popular succulent houseplants; however, the leaves can be consumed, and they offer a delightful taste, and loads of nutrition. If your interests are peaked and you’d like to learn more about growing this dark leafy green, keep on reading for some helpful information.

How to Grow New Zealand Spinach

New Zealand spinach is an excellent addition to any summer garden when other greens are out of season, as it thrives in warm weather, while other leafy greens cannot tolerate heat. Because it prefers heat, New Zealand spinach should be planted in a hot location that receives ample amounts of light; however, it does benefit from some shade during the hottest part of the day. The soil should be nutrient-rich with fairly high levels of lime, well-draining, and a pH level of 6.8 to 7.0 is ideal. Because this dark leafy green likes lime-rich soil, it does rather well in limestone or chalk subsoils. Be sure to avoid planting in soil with high acidity levels, or if the soil is acidic, mix in lime before growing and test the pH level before planting. It will crop well where ordinary spinach would quickly run to seed would be perfect for New Zealand spinach.

The needs of New Zealand spinach vary throughout the year. As such, working it into a rotational cropping plan can be difficult; however, since it grows so quickly, it works very well as a catch crop, and it can be cultivated and harvested without interrupting crops that grow at a slower rate, such as cabbage or leeks, which make great companion plants.

Because spinach needs soil that retains moisture, sowing it in dry, poorly worked land will prove to be fruitless. Instead, the ground should be worked well and watered. Work in between 12 and 22 pounds per square yard of garden compost or rotted manure. Light or sandy soil is best. Additionally, apply a layer of fertilizer that contains 12 percent nitrogen, 6 percent phosphate, and 6 percent potassium, and work it into the site at a rate of 1 ounce per square yard. If the soil is prepped in this manner, no additional feeding should be required. Apply mulch around the base of the plants to prevent weeds from growing, to lock-in moisture, and to keep the soil and roots cool. The use of row covers to shield leaves from pests, such as aphids, leaf miners, cabbage worms, and cabbage loopers.

The best time to harvest New Zealand spinach is when the leaves are young, as younger leaves are sweeter, while older leaves tend to have a bitter taste. If you’d like, when harvesting, you can remove a handful of leaves, or you can cut the entire plant back to the soil.

How to Plant New Zealand Spinach

As mentioned several times, New Zealand spinach grows best in warm temperatures that range from 60 degrees to 75 degrees F. The ideal time to sow the seeds in the garden is around the time when the risk of the final frost has passed or later. You can get a head start by sowing the seeds indoors 2 to 3 weeks before the last frost in the spring and transplant at a later date. It is important to remember that, unlike true spinach, New Zealand spinach is not cold-hardy, and as such, it will not withstand frost. In fact, the best time of year to plant New Zealand spinach is when it is too hot for other varieties of spinach. The plant requires about 55 to 65 days after planting to achieve harvest. 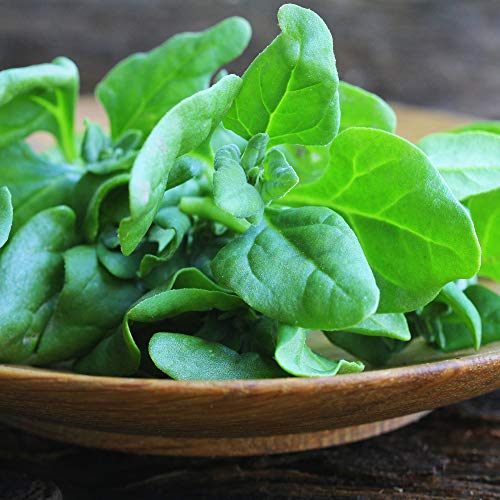 The seeds should be sown into the soil about ½ inch deep and 2 to 4 inches apart. Much like beet seed, New Zealand spinach grows from seed clusters that generate multiple seedlings. To speed up germination, soak the seeds in water over night. When the spinach seedlings reach about 3 inches tall, thin them down to the strongest seedlings, from 12 to 18 inches apart. Similar to squash, New Zealand spinach can be set on hills, which will allow sprawling of the weak stems. The ideal spacing between hills or rows is about 24 to 36 inches.

How to Water New Zealand Spinach

New Zealand spinach should be kept evenly moist. To ensure full growth, water these plants on a regular basis. Avoid letting the soil dry out, otherwise the leaves will wilt and the plants can die. Though this unique leafy green veggie can tolerate drought conditions once it is established, the leaves will not be as tender or as tasty; also, keep in mind that if the soil dries out completely, you run the risk of killing the plants off. To lock moisture into the soil, be sure to apply mulch around the base of the plants. As mentioned, be sure to water the plants from underneath. If watered from above, powdery mildew can develop on the leaves.

How to Propagate New Zealand Spinach

Propagating New Zealand spinach from cuttings is pretty simple. To do so, choose healthy plants that have strong roots and a least one leaf on each of the root segments. Snip of any other leaves that aren’t connected to the selected roots.

Fill pots with drainage holes with high-quality, well-draining, porous potting soil. Insert the cuttings into the soil, leaving at least 3 inches between each one. Keep the soil moist to prevent yellowing or wilting. Plant the cuttings about 1 inch deep so that the stem sits just under ground level for the best results; however, avoid covering the crown. Set the cuttings in a well-lit, warm location, and be sure to water the soil regularly. Once a strong root system develops, transplant into larger pots, and once they grow larger, transplant them into the ground.

A heat-tolerant, nutrient-rich, relatively easy to grow leafy green veggie, New Zealand spinach is an excellent addition to any garden. With the tips and information provided above, you should be well on your way to enjoying a bountiful crop.

Share. Facebook Twitter Pinterest LinkedIn Tumblr Email
Previous ArticleWhat Is a Woodland Garden and How to Create One? Here’s All You Need To Know
Next Article Birdhouse Guide: How to Install, Maintain & Make The Most of Them This Year