How to Plant And Grow Horseradish: Complete Guide

Our complete guide to growing Horseradish at home - Everything you need to know from planting to caring for your Horseradish to harvesting them.

By Hollie CarterFebruary 17, 2022
Horseradish
Affiliate Disclosure: We independently test & research all products reviewed on the site. We may earn a small commission if you buy through one of our links. This does not affect our reviews or placement of products on the site.

Are you cooking a beef wellington for your Sunday lunch? Add a touch of horseradish puree to the meat when you take a bite, and you’ll discover a world of enhanced flavors dancing across your taste buds. The roots of this perennial herb have an aromatic fragrance that is sharp and sweet, and it’s a great addition to beef dishes – Some mixologists even add it to cocktails!

Creamed horseradish amplifies the flavor of many dishes, and its spicy flavor is immediately recognizable to the palette. The horseradish tastes great, pureed or just sliced into a salad. The leaves of the horseradish are also edible, but they have a mildly toxic effect on animals.

The horseradish is native to Europe, preferring the cooler climates of the Northern Hemisphere. This clump-forming plant is a member of the Brassicaceae genus, and it’s easy to grow from root divisions. Horseradish grows readily in the right climate conditions, and it can take over the veggie patch if the gardener doesn’t keep it under control.

Planting in a barrier garden or containers is the best way to prevent horseradish from taking over your garden. This perennial herb grows in most North American climates, preferring cooler climate conditions. Horseradish is suitable for planting anywhere in USDA Zones three through nine.

Also known as the “Red Cole” or “German Mustard,” the horseradish is easy to grow and a great addition to your seasonal vegetable garden. This guide gives you everything you need to know about growing and caring for horseradish.

When planting horseradish, gardeners should prepare the planting site beforehand. Horseradish likes growing in full to partial sun, preferring the morning sun and afternoon shade. The plants reach a size of 12 to 18-inches in height above the soil line, and they enjoy growing in loose, fertile soil with a neutral pH of 6.0 to 7.5.

The horseradish grows a long taproot, and the gardener must loosen the soil to allow the roots to spread and swell. Planting in compacted or clay soils reduce the size of your crop. It’s important to amend the soil before planting as it’s challenging to do it after this perennial establishes itself in the garden.

Gardeners can grow new horseradish using sections of the root with a diameter of your thumb and around 12 to 18-inches in length. The plant spreads quickly, and most garners will only need one or two plants to satisfy their culinary needs.

Choose the right planting site and dig a hole in the flowerbed or veggie garden that’s around six to eight inches deep. Loosen the soil properly to a depth of about 12-inches, and plant your horseradish in rows, 12-inches apart.

Plant the horseradish root in the hole at a 45-degree angle. Keep the crown or the thicker end of the horseradish pointing toward the soil line. Backfill your hole with excavated soil and soil amendments, and pat down the soil to remove any air pockets.

The horseradish grows best in cooler climates, and you can plant out your horseradish cuttings or crowns four to six weeks before the last frost date in your area. Typically, the horseradish does best in temperatures between 45°F and 75°F.

Place the horseradish in the hole and leaves the crown at soil level. Plant your roots and cover them with a light layer of soil. Since horseradish can become somewhat invasive, it’s a good idea to plant them within contained borders.

Growing in pots is the best choice. However, if you’re growing it in the garden, we recommend constructing a box. Make it about 25-inches in width to encapsulate the growing area and stop the horseradish from spreading into other planting areas. Make sure the box reaches at least 25-inches into the soil.

When growing horseradish as an annual, we recommend focusing your efforts on getting a single large horseradish root rather than lots of small ones. The roots grown in the first year tend to have the most flavor and aroma, with a sweet, pungent smell.

As the horseradish grows, it starts to produce several shoots that emerge above the soil line. Remove all the extra nodes, leaving one to grow alone. This strategy helps the plant concentrate its energy into growing one large root.

The horseradish prefers growing in light, loamy soils with good drainage. If you need to improve the drainage at your planting site, consider adding perlite to the soil mix.

Perlite consists of tiny white balls of volcanic rock. Add a handful to your soil, and you’ll improve the drainage in the ground without interrupting root growth.

The horseradish isn’t a thirsty plant, and it’s somewhat drought resistant. However, gardeners will get a better harvest if they keep the soil moist throughout the growing season.

If the plants don’t receive enough water, they tend to develop woody roots. Don’t overwater as you may waterlog the ground, causing the formation of root rot and the death of the horseradish root.

The horseradish enjoys growing in cooler climates. It’s a good choice for planting in northern states, and you’ll get the best harvests in regions with cooler weather.

The horseradish doesn’t need much humidity in the air, but it requires daytime temperatures of between 45F to 75F for optimal development.

Gardeners can side-dress or feed the horseradish every other week during the growing season. The best option is to amend the soil with compost and perlite before planting.

At the end of the second week, you can feed your plants using a balanced liquid fertilizer product featuring a 10-10-10 NPK formulation. Compost tea also helps to add more nutrients to the soil.

Gardeners can propagate horseradish from seeds or pieces of the rootstock. Typically, most gardeners growing for culinary purposes grow horseradish as an annual for its sweet taste.

However, gardeners need to ensure they dig up all roots, or any left in the ground will start growing the following season as a perennial.

If you’re growing your horseradish from seeds, you’ll need to prepare the soil using the method described earlier. After preparing the ground, dig a furrow that’s around three inches in depth. Sow the horseradish seeds into the furrows and cover them loosely with soil. 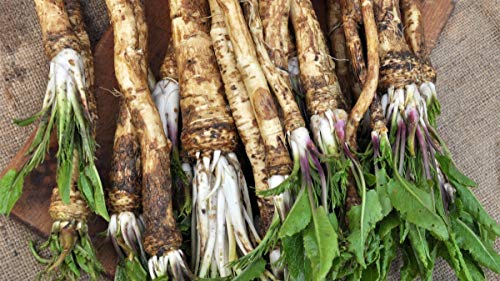 As the seedlings start to shoot new growth, thin out the horseradish, so you have one plant every 12-inches. When the plants get to 4-inches in height, thin them to one plant every two to three feet apart from each other.

If you have a concern with the horseradish taking over your garden, you always have the option of planting in containers. Pick a 30-inch container, and make sure it has drainage holes at the bottom of the pot.

Plant the roots following the previous planting instructions. Horseradish grown in containers requires more watering than planting in beds. Make sure you keep the soil moist throughout the growing season and fertilize the plants every other week.

Some pests feed on the leaves of the plant. Beet leafhoppers, aphids, flea beetles, crucifer weevils, and diamondback moths all enjoy feeding on the horseradish leaves.

We recommend diluting some neem oil and add it to a spray bottle. Spray down the foliage, and the insects will run away. Neem oil has no toxic effect on the plant or people.

Gardeners can harvest their horseradish 140 to 160 days after planting the roots. Cut small side root sections when the plant leaves get to around a foot in height.

The horseradish grows well in the late summer to the early fall, so gardeners need to leave the root to grow until after the first frost of the winter.

While the horseradish is a perennial, returning each year, the roots the plant produces during the first year have the most flavor and aroma. If you’re growing for culinary purposes, then you’ll only be looking at harvesting your plants as annuals, not perennials.

When left unmanaged, the roots of the horseradish turn woody in the second and third years, making them unsuitable for culinary use.

We recommend harvesting your horseradish in the mid-fall, right after the first frost. If you’re growing in cold climates, harvest the roots before the soil freezes.

After harvesting your horseradish, you can shop it, puree it, or store it whole. Keep it in the refrigerator for up to two weeks. Rinse off the whole roots of the plant and store them in a Ziploc bag in the crisper drawer of the fridge for up to three months.