Elderberry Bush Guide: How to Grow and Care for Elderberries

Read our guide to Elderberry Bush for everything you’ll ever need to know! Tips for planting & caring for Elderberries

By Hollie CarterJanuary 14, 2022
Elderberry Bush
Affiliate Disclosure: We independently test & research all products reviewed on the site. We may earn a small commission if you buy through one of our links. This does not affect our reviews or placement of products on the site.

Have you tried Elderberry syrup as an immune booster? When the fall rolls around, you’ll find elderberries in ditches alongside the toads around Nebraska and surrounding states. These dark, purple berries are a favorite of local bird populations, and they gobble them up in a few short weeks after the bushes finish fruiting.

The Elderberry is native to many parts of the United States, and the edible berries feature in preserves, fruit salads, and the legendary Elderberry syrup. Many gardeners are starting to plant Elderberry bushes in their garden for the tasty fruit and the wildlife they attract to the yard.

There are several varieties of Elderberry bushes, including the following.

The Elderberry comes to life in June, producing a beautiful array of small white flowers with a rich fragrance. As a result, you can expect the pollinators to start turning up in your yard to investigate the source of the scent.

Some gardeners compare the look of the plant to the hydrangea, but gardeners get the added benefit of the bush producing tasty berries towards the end of the growing season.

If you plan on growing Elderberries for the fruit, plant the varieties known for producing safe fruit. Some types may cause digestive issues.

The top-producing varieties with safe berries include the York, Nova, Adam’s, and John’s cultivars. The Elderberries are ready for harvesting from August through to September, depending on the variety you’re growing in your garden.

The fruits survive for a few days in the refrigerator after picking, but you’ll need to use them quickly before they spoil. It’s important for gardeners to note that the red Elderberry varieties are toxic and unsuitable for consumption.

Choosing the Right Planting Site for Your Elderberry

When purchasing an Elderberry bush for your garden, choosing the right planting site determines the success and yield of the plant at the end of the growing season.

The Elderberry likes growing in rich, loamy soils that drain well. This plant develops root rot quickly in wet conditions, and you’ll end up killing the plant if the soil remains too wet.

Plant your Elderberry in the late sporing after the last frost lands – check your local listings for information on frost dates in your area. We recommend planting the bushes in pairs, around 60-feet apart, giving you a chance for cross-pollination during the flowering and fruiting season.

Growing a solitary Elderberry will result in the bush failing to flower and produce fruits at the end of the season. Make sure that you give the Elderberry plenty of space. If there’s poor airflow around the bush, it may develop a fungal disease like powdery or downy mildew.

The Elderberry bush can reach heights up to 12-feet, with a spread of up to 10-feet or more. According to gardeners, the Elderberry thrives in soil conditions with a pH of between 5.5 to 6.6.

The Elderberry is a great choice for beginner gardeners. The plant thrives without much interaction with the gardener during the growing season. The bushes do very well in the wild, reaching enormous sizes in some parts of the country.

The Elderberry is a hardy bush, and it continues to grow even after you cut it back and spray it down. The plants take the first year to establish themselves, and they typically start producing fruits by the third or fourth year. You’ll notice a significant jump in growth rate during the second season in your garden. 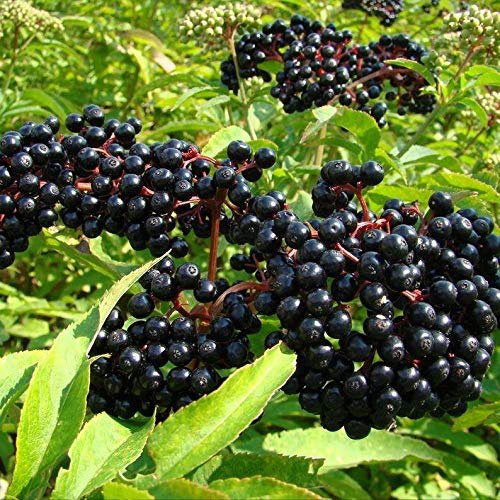 Elderberries require the most amount of care during the first year. The young plants need large amounts of water to grow large shallow root systems. However, it’s critical for gardeners to ensure that the soil drains well. The Elderberry doesn’t enjoy having its “feet wet,” and overwatering may cause the plant to drown, stunting its growth.

Keep the soil moist at all times during the summer season, but don’t overwater the plant. If you live in an area of the United States with good seasonal rainfalls, you won’t have to water the plant in the second year.

The Elderberry bush grows well in a range of soil types, but it produces the best fruit when it has enough nutrients on hand. Feeding the plant in the early summer will help to boost berry production in the fall. When planting your Elderberry, make sure you add amendments like compost and perlite to the soil to improve nutrition and airflow for the roots.

Weeds can be problematic for the Elderberry bush. Weeds tend to suck the nutrition in the soil away from the Elderberry, slowing growth. However, if left unattended, the weeds can crowd out the Elderberry quickly. Since the Elderberry has a shallow root system, it’s easy for it to start o feel cramped as the weeds take over.

Mulching around the base of the Elderberry tree helps to provide more nutrition to the ground. It also stops weeds from popping up at the bottom of your Elderberry, and the mulch limits evaporation from the soil.

Do I Need to Prune My Elderberry Plant?

Most gardeners don’t bother with pruning their Elderberry bushes. Some gardeners like to cut the hardwood stems from the plant at the end of the growing season to prevent the plant from getting too unruly in the yard. However, pruning isn’t necessary, and the Elderberry will do fine without it.

However, gardeners looking for the easiest method will probably get the best success from the softwood cutting, and it doesn’t require the use of any rooting hormone or chemical additives.

Elderberry bushes are relatively easy to propagate using any method, and they grow readily from cuttings. Once you have established the Elderberry, you can start making cuttings for your friends and neighbors.

If you live in the mid-western states, you’ll need to take your softwood cutting from the Elderberry bush in mid-July. To take your cutting, pick a branch with green tips around three to six inches in length. Keep the last set of leaves on the cutting, and strip the rest of the leaves away.

Cut at a 45-degree angle to keep the bush and your cutting growing when taking the cutting. After taking your softwood cutting, place it in a mason jar filled halfway with water. Leave the cutting in the water for at least 12-hours, and then plant it out directly into the garden.

Make sure you’re planting into prepared flowerbeds with the necessary soil amendments. For Elderberries to thrive, they rely on optimal soil conditions with a pH balance between 5.5 to 6.6.

You also have the option of starting your cutting in seedling trays under grow lamps indoors. It takes the cutting around four months to develop root systems, and then you can plant them out into pots or flowerbeds around the yard.

Plant out your Elderberry cuttings in the fall, and let them take root over the winter. The cuttings willfully established by the end of the following summer.

Most gardeners grow Elderberry bushes for the sweet fruit they produce in the fall. However, harvesting the fruit can be a somewhat labor-intensive task. When the Elderberry starts fruiting, it produces a tremendous amount of berries, and you might find yourself wondering what you’re going to do with all of them.

The best time to harvest the berries is when they are dark purple or black. The berry should squish easily between your fingers, signaling the fruit is at its sweetest and juiciest, ripe for picking. If the berries have a shriveled look, then they are on the bush for too long.

Gardeners have to act quickly to harvest the berries, or the birds will beat you to it. However, there’s usually enough for both the gardener and the birds to enjoy. Don’t pick the individual berries. Instead, cut the bush’s stem below the fruiting limb and take the entire branch with you; the plant will regenerate the following season.

Place the stems into a 5-gallon bucket, and keep pruning till you fill the bucket. It may require several days of harvesting to get all the berries. Keep them in the fridge to extend the shelf life, or freeze the berries for up to three months for a tasty frozen snack or an addition to smoothies.