Amazing Carnivorous Plants: Top Picks & Everything You Need to Know

Despite their odd nature, carnivorous plants are not to be feared. Their evolution and their trapping mechanisms are very intriguing and are worth studying. If you want to add an unusual item to your plant collection, you should definitely consider a carnivorous plant.

Currently, there are over 700 species of carnivorous plants in the world. Each of them uses a different trapping mechanism. If you are not familiar with these plants, you will see that their nature is not vicious. Real carnivorous plants have nothing to do with what you’ve seen in cult fantasy movies.

Keep on reading to discover some amazing facts about these plants. We have also made a list of the most amazing carnivorous plants that you can grow at home. Hopefully, the following lines will inspire you to give these tiny predators a chance.

The name of this plant comes from the fact that it features some interesting leaves shaped like pitchers. In the wild, monkeys have sometimes been seen using these natural pitchers to drink water. The scientific name is Nephentes, but this plant is also known as the Pitcher Plant or the Tropical Pitcher Plant.

The pitcher represents the swelling of the leaves’ middle vein. The pitcher leaf is a red shade and it contains nectars that attract the insects. This is a passive trap, meaning that the plant doesn’t move to catch the prey. Once inside the pitcher, the insects are digested by the fluids found on the bottom of the pitcher.

Growing this plant is a bit tricky because its sunlight needs depend on its natural habitat which can be hard to pinpoint. Ideally, you should test several locations and see how the plant reacts to them. Monkey Cup prefers humid environments, so you might want to keep it in the kitchen. You don’t need to worry about feeding it. It can survive with just a few insects that it captures each month. If you insist on feeding it, only give it freshly caught insects, and don’t overfill the pitchers with food.

This is by far the most popular carnivorous plant. Its popularity is given by its scary appearance. It actually looks like a plant with jaws. It also has an active trapping mechanism which makes it even scarier. This plant feeds mostly on ants, but on occasion, it has been seen feeding on other small creatures as well.

The interesting thing about Venus Flytrap is that it can distinguish the debris from the prey. The trap will not close if it doesn’t detect at least 2 movements in 20 seconds. Once the trap closes, it will wait for an additional movement to start the digestion process. This process usually takes about 12 days, after which the trap reopens.

The Venus Flytrap is native to North and South Carolina. It prefers moist, acidic soils and warm temperatures. In dryer and colder environments, it can be grown in terrariums. It thrives in bright, indirect sunlight. As for the feeding part, keep in mind that the traps used by these plants only work if the prey is alive.

Plants grown outdoors will fend for themselves, but indoor plants might need a little help. Choose insects that are small enough to fit in the trap, allowing it to close tightly around the prey. The insects should not be bigger than a third of the size of the trap. While it may be tempting to feed your flytrap other types of meat, keep in mind that it is not used to a sophisticated diet. Many types of meat will be too fatty for its tolerance, and they could cause the decay of the trap.

Sundews use flypaper traps. Their leaves have thin tentacles with sticky glands on their tips. The sticky glands often look like dew droplets. This is why this plant is called Sundew. Its scientific name is Drosera.

This plant is very adaptable, and it can be found in a wide variety of habitats. While it prefers sunny and moist environments, it can also be found in arctic or even desert areas. Due to its adaptability, this plant can easily be grown indoors.

For optimal growth, we advise you to use a sandy medium and keep it in a place where it gets full sun exposure. During the growing season, the soil must always remain moist. For optimal humidity, keep the plant’s container in a tray that always has about 2 cm of water. If you grow the plant outdoors there is no need to feed it. Indoor or terrarium plants will need a few small insects per month. We recommend wingless fruit flies.

This is a rootless aquatic plant. It can be found in still waters, but it can also survive in slow-moving streams. It has visible stems which feature gold or purple flowers in the summer months. Underwater, this plant has small leaves that resemble bladders. These are the plant’s traps. They are equipped with tiny hairs which work as sensors that detect the prey. Once the sensors are triggered, the bladder leaves open a trap door which gives the pray access to a sweet substance. When the prey enters the trap, the digestion process begins.

You can grow this plant outdoors if you have a pond in your garden. But be careful as it can sometimes become invasive, suffocating other plants. You can also grow this plant indoors. Plant it in a mixture of peat and perlite, and place the container in a tray filled with mineral-free water. There is no need to try to feed terrestrial Bladderworts. Their diet consists mainly of soil nematodes and protozoa, and they do a great job providing for themselves.

The scientific name of this plant is Darlingtonia, but it is also known as the California Pitcher plant. It has a wide habitat, being found all over North America in bogs with poor habitats that lack nutrients and diversity. It can also grow in gravel soils, near fast-running mountain streams.

Its leaves have an unusual appearance. They rise normally from the base, but they feature a unique hood at the tip which acts as a trap. The hood secrets a scent that is very attractive to insects. Once the pray is inside the hood, the digestion process begins.

Growing this plant can be tricky if you don’t live in an area that resembles its natural habitat. It likes cool to warm daytime temperatures and cooler nighttime temperatures. It thrives in partial shade, and it grows better when its roots are kept cooler. It needs mineral-free water. If you can, use only rainwater.

The container is also very important when it comes to these carnivorous plants. Use an aquatic plastic pot, with mesh on the sides. Use a mixture of bark and vermiculite, mixed with plenty of Sphagnum moss. In hot summers, you can use the tray method. A few doses of ice in the tray will keep the soil cool.

The scientific name of this plant is Drosera glanduligera. It is very popular in Tasmania and Eastern Australia. This is not a plant that can easily be grown indoors. However, it can be extremely interesting to observe. With enough patience and care, you can create an adequate indoor environment for it.

The interesting thing about this plant is that it uses two sets of different plants. It uses both flypaper and snap-trapping. Its leaves feature tentacles which act both as prey sensors and sticky traps. Once the prey puts sufficient pressure on these tiny tentacles, it is catapulted towards the centre of the plant. This is where the digestion process begins.

Growing this plant from seeds can be very challenging. For starters, it needs cold nighttime temperatures of 1 to 8°C. . It also needs moderate daytime temperatures of 15 to 25°C. . If you manage to grow a mature plant, you will need to feed it regularly to keep it alive. Young plants will appreciate a diet consisting mainly of springtails. Larger plants will prefer small flies.

Scientifically, this plant is known as Cephalotus follicularis. It is one of the smallest pitcher plants. It has the prettiest and most unusual pitcher leaves. If you are a fan of rare plants, you should definitely consider the Eden Black cultivar. Most cultivars have green leaves with red shades. The leaves turn red when they get enough sunshine.

This is a low-growing plant that uses pitfall traps. The insects are attracted by the red shade of the leaves. Once they land on the plant, they slip inside due to the shape of the pitcher leaves. The pitcher has some spikes arranged inwards which prevent the insects from getting out. Once the prey is inside, the digestion process begins. The pitcher leaves also feature a lid, that prevents rainwater from getting inside. Rain or dew could dilute the digestive juices.

This plant is rather easy to grow indoors. Its growing needs are the same as for any other tropical plant. It thrives in direct sunlight, but it will require a dormancy season. This is particularly important if you want to obtain larger pitchers. As for the growing medium, use a mixture of perlite, sand, and peat moss. The soil should be 70% moist at all times. Occasional feeding is necessary, especially for indoor plants. However, there is no need to use live prey. You can use ants, wingless fruit flies, or any other small insects.

Once you learn a little about carnivorous plants, you’ll discover that they are not as scary as you might have thought. Their unique feeding mechanisms are very interesting to observe. Most of them are relatively easy to grow but we recommend growing these plants in terrariums. This will allow you to better control the growing environment.

If you choose a plant that requires feeding, make sure to respect its feeding needs and avoid unusual experiments. Don’t feed it anything from the human diet, and don’t give it prey that it is too big for it to handle. Moreover, never touch the trap as you might damage it.

If you stick to these tips, you won’t have any problems growing such a unique plant. Any of the plants presented above will enrich the collection of an eccentric gardener. 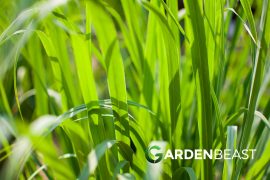 Lemongrass Guide: How to Grow & Care for “Cymbopogon Citratus” 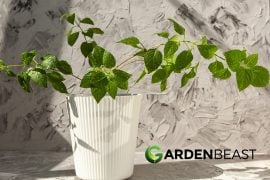 Swedish Ivy Guide: How to Grow & Care for “Plectranthus australis” 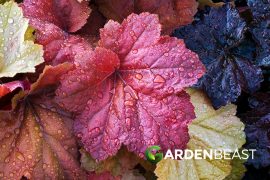 Heuchera Guide: How to Grow & Care for “Coral Bells”