Guide to Aeonium Kiwi: How to Grow & Care for These Succulents

Read our complete guide to Aeonium "Kiwi" for everything you will ever need to know! Tips for planting & caring for "Aeonium Kiwi" Succulents

Aeonium kiwi is a stunning tri-color succulent. It grows spoon-shaped leaves that form breathtaking rosettes. Tracing its origins is almost impossible. However, it is widely suspected that aeonium kiwi is aeonium haworthii’s hybrid. Therefore, we can say that this succulent is probably from the Canary Islands.

Succulent lovers often have aeonium kiwi in their gardens or planters. It is suitable for beginners who are just starting to grow their collection. Aeonium kiwi has a yellow center, with gradually green leaves. Reddish or pink tips form in direct sunlight.

Just like most aeoniums, this particular plant goes dormant in summer. There is no need to water it unless the temperatures outside are super high. This succulent grows in winter and spring, but even then, you only have to water it once or twice a week.

Regardless of where you plan on growing your aeonium kiwi, it is useful to know that this plant is safe for pets. It is not toxic, so your furry friends can play near this succulent!

Aeonium kiwi succulents are suitable for beginners because they don’t require any special care, except for frequent watering during the growing season. These plants might be a bit different than a standard succulent, but once you learn the requirements, you will be able to grow them successfully both indoors and outdoors.

They love sandy and well-drained soil, as well as direct sunlight or partial shade. Standard potting soil might not be the best solution for these succulents. Instead, mix it up with gravel to make fast-draining soil. If that seems like too much work, find a cactus mixture, and you will be ready to plant.

Sunlight is crucial for getting the leaves to develop red or pink ends, but don’t overexpose these plants. Just a couple of hours a day is okay. Remember that six hours of direct sunlight is the limit. If you are growing this succulent indoors, keep it in a sunny room. Heat could be a problem, but your plant will warn you that something is wrong. Brown spots on the leaves mean that you have to move them to a location that has more shade. 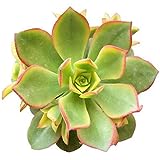 Aeonium kiwi might change its shape if it doesn’t get enough sunlight. The plant might stretch to one side in search of the sun, and end up breaking the rosette shape. It is fixable if just a couple of strands are stretched. Simply prune the succulent a bit, and it will be round. Pruning should do the trick, but you could always propagate the plant and place it in a sunny place this time around.

If your aeonium kiwi is getting a bit too large for its container, think about repotting. It will help the plant thrive and grow. The perfect time for repotting is in fall, as soon as the dormant period ends. All you need to do is change the soil and find a larger container. You can continue watering the succulent as usual after repotting since it doesn’t need any extra care.

Growing seasons for aeonium kiwis are winter and spring. Water them regularly, but not too much. Most succulent enthusiasts do it once every four to six days. The soil should always be slightly moist. You can test the soil by sticking your finger in to see if it is dry. These plants don’t mind some extra water but keep in mind their root systems are sometimes sensitive and could rot.

Once summer arrives, the succulent usually goes dormant, so it will not need too much water unless the weather conditions are dry. The shriveling leaves are the signal that the plant needs moisture, so pay close attention. You don’t have to use fertilizer unless you want to. Liquid fertilizer is enough during the growing season.

Propagating these succulents is super easy and straight forward. But before you start, prepare the plant by watering it well for a couple of weeks. As you might have guessed, the best time to do this is while the succulent is growing. So do it either in winter or spring. There are two ways to propagate aeonium kiwi – with cuttings or by division.

Considering that aeonium kiwi grows up to three feet in height, you can choose which branch to cut and propagate. Make sure you use a sharp tool for this. Cut a couple of inches below the rosette, then place the cutting somewhere dry and away from sunlight. Leave it there for two to three days. The stem will create a small callus that protects the young plant from infections.

Meanwhile, get a new planter and fill it with well-draining soil. Then place the new succulent in the ground and continue watering the plant as usual. It will start developing a root system after a couple of weeks, so keep the dirt moist.

Aeonium kiwi divides by itself. After all, this is a tall succulent that has very heavy rosettes. The branches often bend to the ground and develop so-called aerial roots. Once a branch reaches the soil, the roots go in, and you have a brand new aeonium kiwi. You can divide it and put it in a separate container, or let the plant grow – it is up to you.

Aeonium kiwi is a beautiful and colorful succulent you can keep inside on your windowsill or outside as a part of your garden. Many succulent lovers already have them in their planters, so getting your hands on aeonium kiwi is not an issue. They do require slightly different care than other succulents, but it is not complicated at all. You just need to water it a bit more, and that’s it.

This plant also loves moderate temperatures and sunny weather. After all, sunshine helps them develop the stunning pink tips that make these plants stand out right away. Not to forget that aeonium kiwi is not toxic to humans and animals, so they are a perfect succulent to have around.

Ana is an experienced writer and an urban gardener, making use of limited space on her balcony to grow vegetables every season. She got into gardening thanks to her grandmother, who introduced her to the wonderful world of succulents. Two of them still collect succulents as well as cacti together, and Ana is always on the lookout for rare (and colorful) varieties. She is currently occupied with growing avocado trees indoors.

Complete Guide to Echeveria elegans: How to Grow & Care for Mexican Snowballs

Crassula Buddha’s Temple Guide: How to Grow & Care for this Succulent