Complete Guide to Wisteria: How to Grow & Care for Wisteria

By Hollie CarterAugust 5, 2020
Complete Guide to Wisteria: How to Grow & Care for Wisteria

Stare out onto your garden landscape to see beautiful blue, lilac, and pink blooms draping from wisteria vines. Wisteria is a high-climbing variety of vine that blooms spectacularly in the spring and early summer.

These rapidly-growing vines produce some of the most visually striking blossoms you’ll ever have the pleasure of seeing, and the flowers release a pleasantly sweet fragrance that lights up the yard and tantalizes your senses.

Planting wisteria in your yard is an excellent way to transform the visual qualities of your garden. The drooping vines burst into color, creating a dramatic effect in your garden. We put together this guide to wisteria to give you everything you need to know about selecting the right wisteria for your garden, planting the vine, and caring for it year after year. 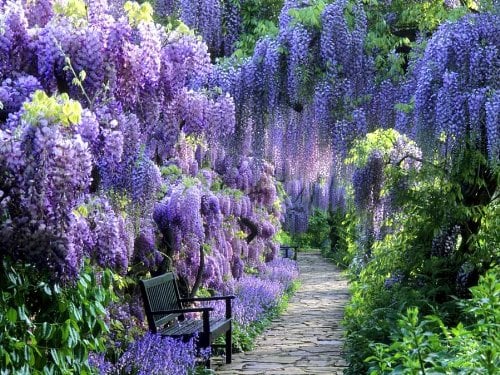 Wisteria is a vine that produces cascades of purple to bluish flowers during the late spring and summertime. These vines make a spectacular addition to your pergola or patio, providing a visual element that enhances your yard’s living areas.

However, wisteria is known for growing rapidly and taking over the local planting area. The vines can reach lengths of up to 75 to 100-feet in length, and the vine gets heavy, especially when it starts to flower.

Wisteria is a seeking plant, and it will work its way into any nook or cranny thy find. Therefore, we recommend that you avoid planting wisteria near to your home, as the vines can become problematic for homeowners. If the plant scales your wall, it might reach the roof, causing damage to the structure.

Wisteria flowers play on your senses, producing a sweet, intoxicating fragrance that lets you know summer is here. The flowers will only appear on new vines, and gardeners should continually prune old canes to inspire new growth and flowering in the plant.

While wisteria vines look amazing when flowering, it’s important to note that almost every part of this plant is toxic to humans and most animals. The wisteria vine contains a substance known as “lectin,” as well as the compound, “wisterin.”

Both of these compounds are toxic to humans and pets. If you eat the flowers of the plant, it could result in a bad case of diarrhea and nausea. If you consume too much of the flower, it could lead to death. These deadly compounds have the largest concentrations in the seeds and seed pods of the plant.

If your pets or children consume the seeds or the flowers, rush them to the emergency room and call the poison control hotline for advice while you’re driving to the hospital.

American varieties have smooth seed pods, and they produce seeds that have a cylindrical bean shape. American types also only start to flower in the late spring after the vines finish producing leaves. The flowers in Asian varieties appear before the leaves. 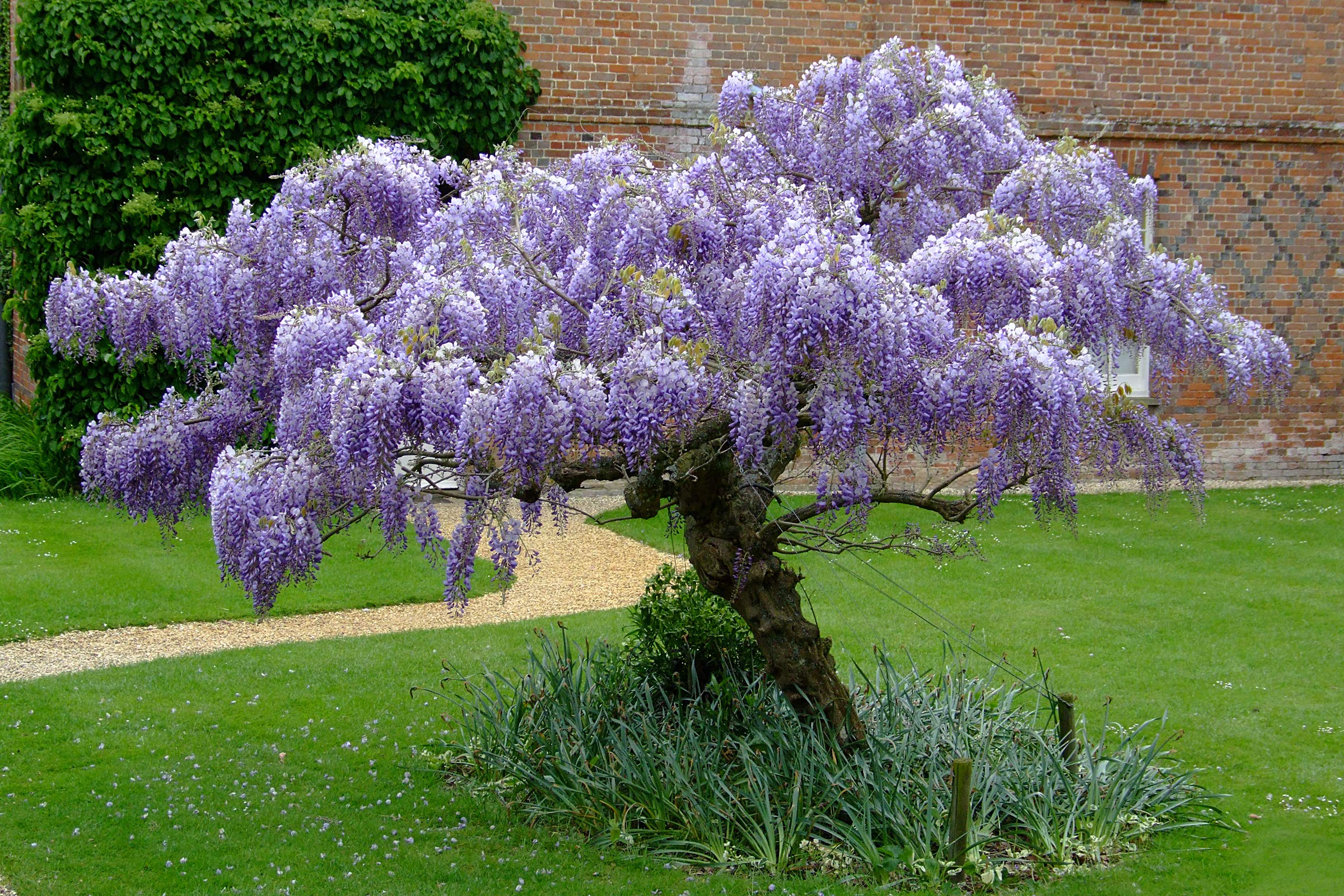 How to Plant Wisteria

Wisteria loves to grow in loose, loamy soil that has plenty of nutrients and proper aeration. The soil must drain well, as wisteria does not enjoy having “wet feet.” You can choose a planting site in your yard that gets full sun throughout the day, as wisteria enjoys the direct sunlight for optimal growth.

If you plat your wisteria in a shady area, the plant will still grow, but it might not reach optimal heights, and you might find that the plant fails to flower appropriately during the spring and summer.

When planting your vine, makes sure that you dig out a hole that’s deep enough to cover the roots without covering the crown of the plant. Covering the crown will result in the onset of root rot, and the plant will die.

Dig your hole as deep as the root ball, and two to three times wider than the root ball. Space your wisteria at least 10 to 15-feet apart to avoid the plants growing into one another. Plant your wisteria in the early spring, or the late fall. For those gardeners living in warmer areas, overwintering the plant is easy, and it’s the better choice to allow rapid growth in the springtime.

Choosing a Site to Plant Wisteria

When choosing the best planting site for your wisteria, we recommend that you avoid areas with any other plants. These vines grow fast, and the size of the plant will overpower any neighboring flowers or shrubs.

Make sure you avoid planting next to structures unless you want the wisteria to grow into it and cause you problems. However, there are times when planting next to structures that could benefit your garden. Planting the wisteria at the base of a pergola is a fantastic idea. The vines grow in and around the pergola, and when the vines flower, it makes the structure look beautiful as the flowers leap to life and cover the structure.

Mature vines get very heavy, so make sure that your structure can handle the additional weight of the plant, especially when it flowers.

Tips for Caring for Wisteria

You’ll need to care for your wisteria if you want it to flower season after season. In the early springtime, apply a layer of nutrient-rich compost at the foot of the vine, and then cover it with a 2-inch layer of mulch. The mulch helps to retain the water in the soil while feeding the plant nutrients like nitrogen.

You’ll need to ensure that you aggressively weed around the plant when it’s young and keep weeding throughout the plant’s lifecycle. Some gardeners say that feeding the plant with phosphorus aids in the plant’s flowering process, producing the biggest and most colorful flowers.

Bone meal is also another nutrient you can add to the soil in the early spring to induce flowering. We prefer using granulated fertilizer over water-mixed fertilizer for our wisteria. The granules provide a slow-release into the soil that won’t damage or burn the plant. 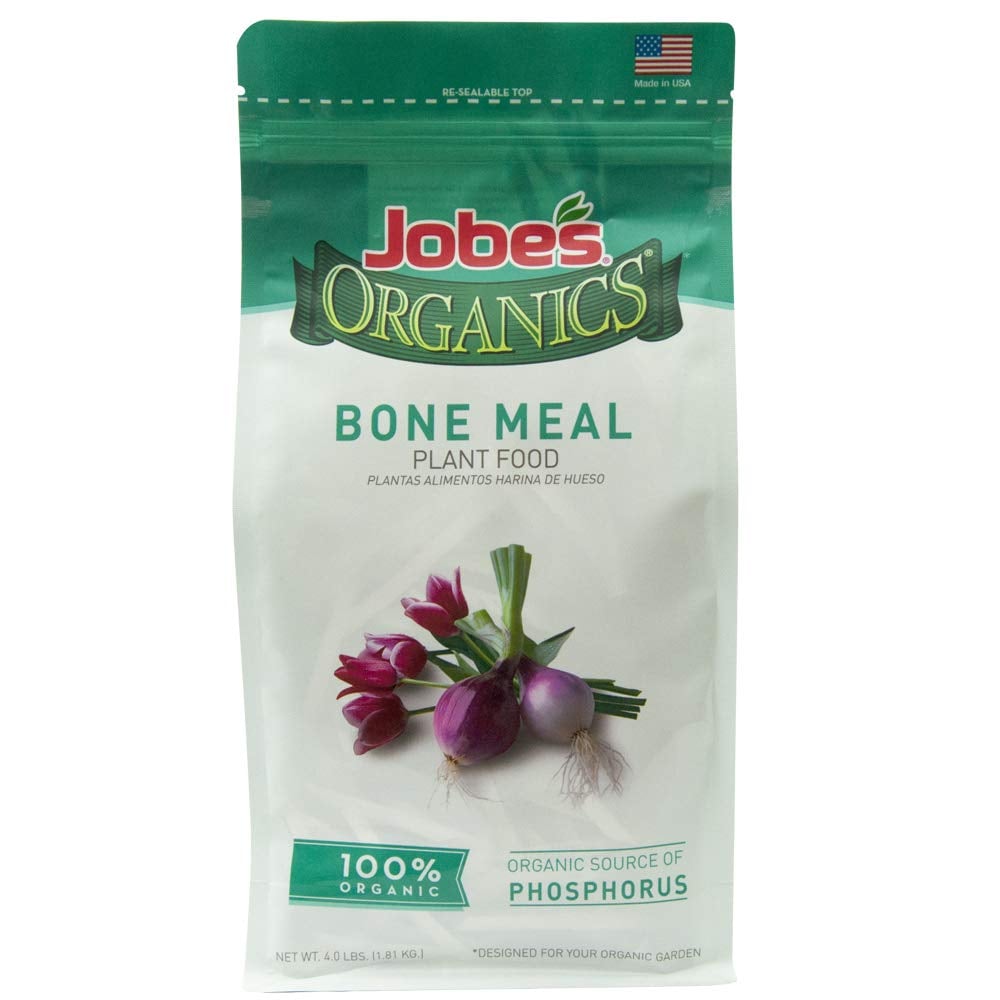 Tips for Pruning Your Wisteria

The secret to good flowering is pruning your wisteria. Wisteria only produces flowers on new canes, so it’s best to remove all of the old ones at the end of the growing season in the late fall. Some gardeners in warmer states can start pruning as late as the mid-winter.

Remove all of the dead plant matter, leaving only a few buds on each stem. For those gardeners looking to enhance the blooming period, we recommend that you cut back the shoots of the plant every 2-weeks during the summertime.

If you have a new wisteria plant, it may take it a few years to start producing flowers. In this case, it’s best to cut the plant back close to the base after planting. The following year, cut the primary stem back to 3-feet from the previous year’s growth.

What to Do if Your Wisteria Doesn’t Bloom

Some gardeners might find that the wisteria doesn’t bloom. In most cases, plants fail to flower properly for the first three years as they establish themselves in the garden. However, after the plant reaches maturity, the blooms will begin in the late spring and last throughout the summertime.

Some gardeners swear by the addition of phosphate to the soil to spur flowering, while others rely on other gardening techniques to help the vines bloom.

One of the more popular methods for encouraging flowering in your wisteria is to drive a shovel 8 to 10-inches into the ground, at a distance of a foot from the trunk of the vine.

Intentional damaging the root system puts the vines into shock, and the vines start to flower as a survival response. Don’t worry about damaging the plant, as these hardy vines recover easily during the growing season.

Use organic pesticides and fungicides to remove disease from your plants, and check the plants each day until they return to health.

Ginkgo Biloba Guide: How to Grow & Care for “Maidenhair Tree”