Complete Guide to Windmill Palms: How to Plant & Care for “Trachycarpus Fortunei”

Read our complete guide to Windmill Palms for everything you will ever need to know! Tips for planting and caring for "Trachycarpus Fortunei"

If you’re looking to add a plant with a tropical vibe to your landscape, the windmill palm (Trachycarpus fortunei ) is an excellent choice. This evergreen perennial palm tree is part of the Arecaceae family and is native to the subtropical and temperate forests of China, India, Japan, and Mayanmar.

It has been cultivated for thousands of years, particularly in China and Japan, so pinpointing where it originated has proven to be difficult.

In addition to windmill palm, this species of palm tree is also referred to as the Chinese windmill palm (though, as mentioned, it has not been determined that it originated in China), the Chusan palm, and the fan palm.

Before flowers appear on the female trees, they grow drupes; small fruits that resemble berries. Initially yellow, the fruits turn a dark bluish-black color when they ripen in the fall. 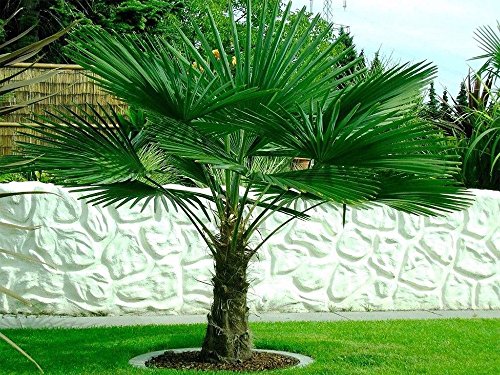 The windmill palm is a very hard species of palm and most adults can withstand temperatures that fall as low as -4 degrees Fahrenheit (-15 degrees Centigrade) and can even tolerate snow.

Though they are not native to North America, they can sustain in USDA zones 8a through 11. However, do note that young windmill palms are a little less cold-hardy and generally cannot withstand temperatures lower than 20 degrees Fahrenheit (-7 degrees Centigrade).

Thanks to its hardiness, this palm tree can add a tropical feel to landscapes of cold climate regions.

Though Chusan palms can tolerate severe temperature changes, they do need protection from the wind, as wind can damage the fronds.

The windmill palm fares best in shaded areas, where it will grow a thinner, yet taller trunk. It can also be grown in full sun, but the trunk will be stouter and shorter.

Therefore, if you would like a taller tree, plant your Chusan palm in a shady area, but if you don’t mind a shorter, wider-trunked tree, a location that receives a lot of sun will do just fine for this tree. 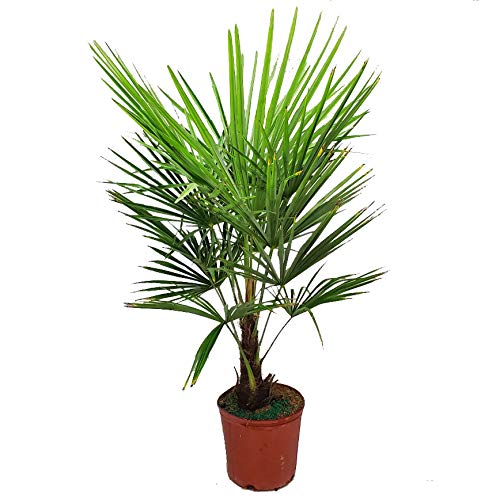 How to Plant a Windmill Palm

Windmill palms can be grown indoors in a container or outdoors in the ground. If you choose to grow yours outdoors, make sure to select a location where it will be protected from the wind.

These hardy palm trees do not have stringent soil requirements. As such, it can grow well in most soil types; however, do note that when grown in highly chalky soil, the green foliage can turn yellow.

To achieve the best results, plant it in relatively fertile, well-draining soil that is rich in organic matter.

If you are growing your windmill palm in a container, it will not need to be transferred to a larger container for a long period of time, as its growth rate is very slow.

The Chinese palm does not have any specific feeding requirements. In fact, once it is in the ground or a container, it should fare well from the nutrients in the soil.

With that said, if you want to enhance the growth rate of this slow-growing tree and ensure it remains healthy, you can feed it with a 10-10-10 slow-release fertilizer.

For best results, horticulture experts recommend fertilizing these palms on a monthly basis during the growing season, applying 0.5 to 2 pounds of fertilizer to the soil per month; mature trees should be fed more and younger trees should be fed less.

To feed, apply fertilizer around the soil underneath the canopy. Avoid placing fertilizer directly up against the trunk. Water the soil well before feeding to avoid burning the roots.

Windmill palms are relatively low-maintenance trees; but, if you want to keep them looking their best, maintenance grooming is recommended.

To improve the aesthetic appeal of your Chusan palm, remove any yellowed or brown leaves and spent flowers. You can also trim off any crown shafts (the hair-like substance on the trunk) as it dies.

Unlike other species of palm tree, the Chinese palm is not affected by serious diseases or pests, further adding to the low-maintenance of this plant.

However, on occasion the windmill palm can become plagued with scale insects and palm aphids.

Disease infestation is also uncommon for the windmill palm, though depending on where they’re planted, may develop leaf spots and yellowing disease, which can be lethal.

Additionally, as noted, while these palms do like moist soil, they cannot tolerate excessive moisture. If planted in poor draining soil or if watered too frequently, they can develop root rot. 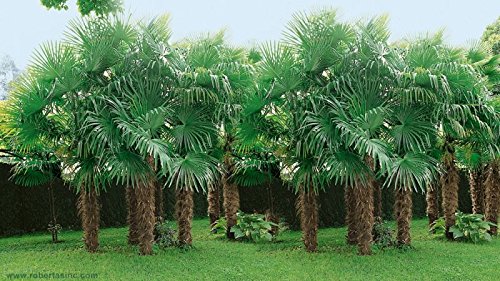 Chusan windmill palms can be propagated by seeds. While seed propagation is relatively easy, it does require patience, as it can take as long as three months for the seeds to germinate.

If you are propagating, sow the seeds in a small container filled with a thin layer of soil. Once planted, water the soil and place the container in a warm, moist location.

It may help to wrap the container with a clear plastic bag to encourage moisture and warmth. Also, it’s important to make sure that the seeds receive ample amounts of light.

The best time to propagate windmill palms from seeds is during the winter or early spring. Begin growing indoors and in the summer, the young trees can be moved outdoors.

Do note that you should wait to transplant the palms until they have established their root systems and have developed at least three to four sets of leaves. Transplanting any early could shock and damage or even kill the plants.

Trachycarpus fortunei has been cultivated for thousands of years; particularly in Japan and China, where it has been primarily used for is durable leaf sheath fibers. The fibers are used to make a variety of products, including ropes, mats, sacks, hats, strings, and brooms.

Windmill palms are also largely cultivated in outdoor spaces, such as gardens and parks, in subtropical and warm temperate climates around the globe.

Because they have a high tolerance for cool summers and cold winters and even snow, Chusan palm trees are also widely used in landscapes in the cooler climates of the northern regions of the United States, such as the Pacific Northwest, the Mid-Atlantic region, and upper southern states, as well as countries throughout Europe, including the Netherlands, the United Kingdom, France, Germany, and Belgium.

Because of this palm trees slow growth rate, it is also commonly cultivated in containers and used as house, patio, deck, or terrace plants.

Whether you are palms in a container or in the ground, if it is going to be outside, it is important to choose a location that offers shelter from the wind, as wind can damage the fronds. An ideal location would be a west- or east-facing side of your property.

If you are looking to add a tropical vibe to your landscape, conservatory, patio, or sitting area, the windmill palm is a great choice.

This sturdy, cold-hardy, low-maintenance species of palm tree is aesthetically pleasing and doesn’t require an intense amount of care, making it the ideal plant for both experienced gardeners, as well as those whose thumbs may not be so green.

Nigella Damascena Guide: How to Grow & Care for “Love-in-a-Mist”

Pachira Aquatica Guide: How to Grow & Care for “Money Tree”

Sago Palm Guide: How to Grow & Care for “Cycas Revoluta”