Shasta Daisy Guide: How to Grow and Care for “Leucanthemum superbum”

Read our guide to Shasta Daisy for everything you’ll ever need to know! Tips for planting & caring for "Leucanthemum superbum"

By Hollie CarterMarch 17, 2022
Shasta Daisy
Affiliate Disclosure: We independently test & research all products reviewed on the site. We may earn a small commission if you buy through one of our links. This does not affect our reviews or placement of products on the site.

Are you searching for a reliable, low-maintenance plant for your garden this year? Perennials are among the top choices, giving you a range of selections to mix and match in your flowerbeds. The Shasta daisy offers gardeners a beautiful flowering display throughout the growing season.

The Shasta is a deer and rabbit resistant perennial, featuring an extended blooming time, and it doesn’t experience any problems with disease or pests. The Shasta daisy is a European hybrid crossing the Oxeye and Nippon cultivars.

The Shasta daisy is the creation of Luther Burbank. Burbank cultivated the daisy in his native California in the 1800s. The name for the daisy comes from the inspiration provided by Mount Shasta, one of the Golden States’ most stunning snow-capped peaks.

The Shasta is hardy down to -20F, making it a great choice for cold-weather gardens in the Northern United States. The plant thrives in the full sun, reaching three to four feet in height and spread. There are dwarf cultivars of the Shasta for gardeners that want a short, stocky plant with a cheery appearance.

The Shasta is the ideal choice for beginner gardeners. The plants are fine to grow when left alone, without getting leggy or experiencing any reduction in blooming. As a member of the Asteraceae family, the Shasta daisy produces the classic daisy-shaped bloom with a bright yellow bee.

The classic white petals spread out from the bee, which gives them the nickname “ray flowers.” Each flower has a diameter of several inches, and the leaves on the base of the plant are also visually impressive. The edges of the leaves have teeth, and the flowers bloom for several weeks, starting in the mid-summer.

The plant grows low to the ground, with the flower stems reaching heights of between three to four feet. This guide gives you everything you need to know about growing Shasta daisies in the garden this year.

Gardeners can sow Shasta seeds in containers in the early spring or outdoors in the late autumn with the use of a cold frame. Provided you seed the plant correctly, you’ll get blooms the following year. Typically, the plants start blooming after a single season’s growth.

If you’re buying a plant in a container to transplant into the garden, plant it during the springtime or early fall. The Shasta daisy enjoys growing in the full sun. The more sunlight you give it, the harder it blooms.

The Shasta isn’t picky about soil conditions, and it grows readily in low-quality soils. However, you’ll get better flowering and a stronger plant by placing it in a flowerbed with fertile, nutrient-rich soil.

Shasta daisies prefer growing in moist soil loosened to a depth of 12 to 15-inches. After excavating the soil, line the hole with compost and mix some compost into the soil to provide the necessary amendments.

Dig your daisies into a hole that’s twice the diameter of its container, spacing the daisy plants one to two feet apart. When placing the root ball in the container, make sure you keep it just under the soil, almost level to the surface.

After planting, press down on the soil with your hands to remove air pockets. Water the plant deeply to finish your planting task, and keep the soil moist for the next few weeks while the plant establishes itself in the garden.

Fortunately, beginner gardeners will love the low-maintenance requirements and ease of growing the Shasta daisy. Plant the daisy in the full sun, and don’t overfertilize them. Overfertilizing the plants causes them to become leggy, so only fertilize in the mid-summer using a half-strength liquid fertilizer.

It’s important for gardeners to keep the soil moist. However, the plants are somewhat drought resistant, and you might not have to water if you live in regions of the United States receiving more than 1-inch of rainfall per week.

After the first season, gardeners don’t have to water the daisy at all unless you’re experiencing drought in the area.

You can mulch your daisies at the end of the fall and in the late spring. Mulching helps to preserve moisture in the ground, limiting the effects of evaporation.

Spread a layer of mulch around the base of the plant, around two to three inches thick. Mulching also helps stop the emergence of weeds, and it also leaches nutrients into the ground when watering.

When the flowers start to fade, gardeners can deadhead the spent blooms to extend the flowering season. After the first frost, cut back the flowering stem to the base of the plant, around an inch above the soil line.

The Shasta daisy has excellent heat and cold tolerance in their growing zones. However, high temperatures can cause stress in the plant, preventing or slowing blooming. Similarly, a late freeze or spring frost can also damage the buds, preventing them from blooming.

Mulching around the base of the plant in the late fall can protect the new buds the following year. Gardeners must ensure that they have good drainage in the soil. Shasta daisies don’t like “wet feet,” and they develop root rot that kills the plant.

The Shasta daisy is a bright and cheerful plant. Adding a few of them to your flowerbeds brightens up the yard, attracting pollinators into the garden.

The blossoms appeal to several butterfly species, and bees love buzzing around the plant. When the plants are in bloom, you’ll find plenty of insect life taking an interest in the plant during the summer months.

The Shasta daisy also features hollow stalks. So, gardeners that prune the stems back provide a suitable habitat for bees to overwinter.

It’s easy to grow perennial daisies from root divisions, seeds, or juvenile plants purchased at your local nursery. You also have the option of digging them up and separating them to plant in other locations around the yard or share them with friends.

If you’re propagating your daisies from seed, you’ll need to plant the daisies in the early spring after the last frosts finish in your area. Check your local listings for details.

Gardeners can sow the seeds directly into the flowerbeds by hand. You also have the option of starting your seeds indoors in cooler climates.

When planting your Shasta seeds, start them in covered containers and sow them about 1/8″ deep into seedling trays filled with organic potting mix.

The Shasta seeds will germinate in ten to 20-days, with most daisies blooming the following year. 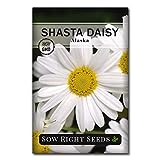 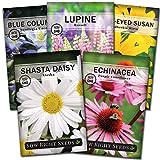 Growing daisies from seed are easy, but it takes some time. If you want a faster start to the flowering season, and flowers in the first year of growth, we recommend picking up a juvenile plant from your local nursery.

The juvenile plant already has a year of growth under its belt, and it’s ready to start flowering this season. Follow the planting guide discussed earlier for positioning and planting tips.

You can propagate your daisies by dividing the plants every two to three years in the early springtime or the early fall.

Some signs that the plants require division include a slowdown in foliage growth, the plant starts producing smaller flowers, or some parts of the plant look dead or sparse.

Dig up the daisy with a garden fork, taking care not to damage the roots. Shake away all the soil around the roots, and take out a sharp knife to divide the roots. Divide the plant in half, keeping two halves.

Yes, all parts of the Shasta daisy are toxic to people and pets, and it’s one of the reasons why deer and rabbits leave this plant alone. Shasta daisy toxicity can occur due to ingestion or skin contact with the plant.

What are the Symptoms of Shasta Daisy Poisoning?

People or animals that ingest the Shasta daisy find they develop severe gastrointestinal distress shortly after consuming the plant’s flower, leaves, or stems. Some of the common signs of Shasta poisoning include diarrhea, vomiting, and drooling. Contact with the skin causes rash, swelling, and redness in the affected individual.

The Shasta daisy is typically a low-maintenance plant, and it thrives without much care. However, the following pests and diseases may present problems to gardeners during the growing season.

When your daisies reach their peak, you can harvest them from the garden for display around the home. Cut the daisy around one to inches from the base of the plant.

We recommend planting the following Shasta daisy varieties in your garden this summer.

“Becky” – A classic cultivar that grows to heights of three feet, with large flowers.

“Snow Lady” – This variety blooms in the first year after starting it from seed.