Parodia Magnifica Guide: How to Grow & Care for the “Ball Cactus”

This has to do with the fact that the Rounded Ball cactus is one of the endangered species of cacti (according to the IUCN Red List), thus owning and caring for one should be considered an act of conservation if nothing else.

Like its names imply, the rounded ball cactus is round, like one or more balls, varies from green to blue, and makes an excellent decorative component if you’re into xeriscaping; just want to spruce up your garden, or looking for a bit of green in a sunny space, requiring very little to keep it happy and magnificent.

About the Rounded Ball Cactus

Parodia Magnifica Cacti are pretty easy to take care of, requiring little maintenance. These amazing plants prefer warmer climates, even though they are known to survive even at temperatures as low as 20 degrees Fahrenheit – however, such an environment is not recommended for extended periods, the emphasis here is survival not necessarily the health of your cactus.

This is a cactus that will prefer sunlight and warm temperatures. Specifically, if you want to keep your Rounded Ball Cactus outside, you should make sure that it’s placed in a half-shaded environment, ideally getting full sun exposure during the mornings when the light is not so intense. It is recommended that you bring the cactus indoors during winter. However, especially if you don’t live in a continuously warm climate, you should ensure that it gets enough light.

Like other cacti, the Rounded Ball grows during spring and summer and is dormant during winter. One pro-tip is that during its growing season, especially if the cactus is indoors (and usually getting light from a window) you should rotate the pot from time to time to ensure a more elegant growth pattern and make sure it doesn’t become skewed.

You should also be careful where you place it, especially if you have pets that like to explore – as it has hard spikes that grow in clumps on its ridges and can become harmful if not properly avoided.

Another thing to consider is that while it is not prone to any diseases or pests, in particular, it has been known to develop aphides – depending on its surrounding plants and environment – so you might want to keep an eye out for the cactus’s placement and growth.

The process of planting and repotting should be done during the growing season to ensure maximum chances of success. Be careful when handling it because its spikes are quite prickly and they become harder with age.

The Parodia Magnifica is a very classic cactus, requiring an airy soil. You can use a store-bought blend specifically designed for cacti and add some perlite for extra drain, if necessary or make your own combination of coarse sand, perlite/pumice, and regular soil mix.

One thing to consider when choosing the pot for you Rounded Ball cactus is that with age it might tend to grow in a cluster, and it should have space to develop its new bulbs. If, however, you want to keep it as a single plant, then any pot will do – you might want to keep it in a smaller pot to avoid overwatering.

Another tip here is that this cactus does not mind some fertilizer during its growing months. So, if you have it on hand or you notice your cactus struggling a bit you can add some diluted nitrogen fertilizer. However, you should stop this practice altogether in the winter.

Still subscribing to classic cacti rules, the Parodia Magnifica requires more watering during its growing season – however, this does not mean that the water should pool around it. Water should be provided only after the soil is dry to the touch. During the winter months, while the cactus is dormant, you might want to stop watering it completely and place it in a room that is a little cooler.

If you have overwatered your spiky ball – which will be indicated, as is the case with most cacti, by discoloration or marks on the plant – don’t despair – you can try leaving it to dry or try repotting it in a dry mix. To avoid overwatering altogether, apply the ‘soak and dry’ technique which consists of watering the plant only if the soil is completely dry.

Propagation can be done the hard way – by seed or the easy way – by offsets. Let’s start with the hard way. Seeds can be sown during the growing season and will take some effort and time to ensure successful growth. Just like any seeds, they will require a bit more moisture and warmth, covered with a plastic wrap in a shaded environment. But please bear in mind that this will take substantially longer and there are variable chances for success.

The easy way, on the other hand, will require the plants to have offsets. The offsets should be cut from the mother plant and left to callous over one or more days – depending on where you leave them to dry. Once the cut has calloused, you should place this part in the soil so it can start growing roots.

Both of these types of propagation, however, should be done during spring, summer, latest early fall and should not be attempted during the winter, unless you have prior experience with such endeavors, as there are very slim to almost non-existent chances of success.

Whether you’re just starting out with succulents and cacti, or you’re planning on expanding your garden you should definitely consider a Rounded Ball, as it’s easy to care for and grows into a pretty impressive plant.

This spiky ball becomes even more adorable when it starts blooming, and you can count on the fact that it will wear its flowers crown all through the growing season and even though it is on the endangered species list, you’ll more often than not be able to find this species of cactus both online and offline with ease.

The very symmetrical structure of each bulb transforms it into a fractal-like construction when it clusters up, making it a highly decorative cactus that can brighten up any space, on a desk, windowsill, or in a garden.

You can also plant it in a collage pot with several other cacti. Just make sure that they all subscribe to the same environmental rules. And if you want to get really fancy and you can get ahold of one, you might also want to throw in a Parodia Magnifica f. aurata for a spot of extra color and added interest.

Are you growing Rounded Ball cacti? Share your experience with us in the comments! 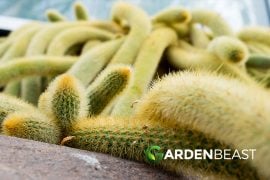 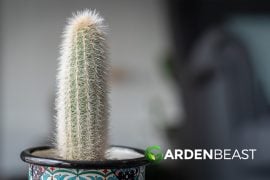 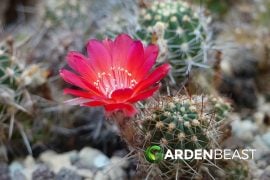 Echinopsis Backebergii Guide: How to Grow & Care for “Carmine Cob”