Kidney Vetch Guide: How to Grow & Care for “Anthyllis Vulneraria”

Read our guide to Kidney Vetch for everything you’ll ever need to know! Tips for planting & caring for "Anthyllis Vulneraria"

By Hollie CarterMay 12, 2022
Affiliate Disclosure: We independently test & research all products reviewed on the site. We may earn a small commission if you buy through one of our links. This does not affect our reviews or placement of products on the site.

Anthyllis vulneraria is commonly called woundwort, lady’s fingers, devil’s claws, or kidney vetch (sometimes spelled as one word, “kidneyvetch”). This herbaceous perennial, which has a bushy growth habit, is alternatively referred to as Anthyllis montana vulneraria. Kidney vetch is a member of the Fabaceae — or legume — botanical family, which makes it distantly related to soybeans, chickpeas, and alfafa. Its genus of flowering shrubs and herbs counts over 200 different species, all of which are famous for attracting an abundance of butterflies and bumblebees. Kidney vetch is guaranteed to liven your garden up!

While this lovely flowering plant is most famous for its medicinal value, its unusually-shaped and wonderfully vibrant colors mean that kidney vetch definitely hold its own as ab ornamental plant, as well. Kidney vetch naturally grows in coastal areas, including around dunes and cliffs, and is a wonderful choice for people who are hoping to create pollinator gardens near the seaside.These flowering plants are prolific spreaders and should not be grown as houseplants, but can thrive in containers outdoors.

Kidney vetch is not at all difficult to grow and care for. These plants should ideally be placed in a south-facing or west-facing location where they can receive at least six hours of direct sunlight a day. If you can only provide partial shade, in which the plant would be able to get four hours of sunlight, you can still successfully grow kidney vetch in your garden.

They are well-adapted to a variety of temperature conditions, though, tolerating the colder and wetter English summers and cooler winters as well as Mediterranean conditions. As you’ll know from the fact that kidney vetch is quite abundant in Iceland, these plants are frost hardy.

Soil-wise, Anthyllis vulneraria is rather undemanding — because these flowering plants don’t like perpetually soggy conditions, the only non-negotiable condition you need to be able to meet to successfully grow kidney vetch in your garden is that the soil be well-draining. Other than that, though, kidney vetch tolerates almost anything. This plant will grow in sandy, rocky, loamy, chalky, or even clay soil, and the soil can be extremely poor in nutrients — kidney vetch will naturally contribute to creating a richer soil. Anthyllis vulneraria does not need a particular pH level and can grow in acidic, neutral, or alkaline soil. If you would prefer to grow kidney vetch in a container, that is possible too; it just needs to be deep enough to support the plant’s root system. 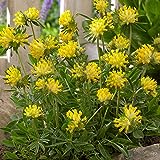 The rest of this section will be music to the lazy gardener’s ears. Kidney vetch does not need to be fed fertilizer — as you’ll easily be able to see if you live in a coastal region in Europe and you love hiking, these plants thrive as wildflowers without getting any care from anyone but the pollinators that come to visit it. Kidney vetch is surprisingly resistant to almost all plant diseases and pests, perhaps in part due to the bacteria it lives in symbiosis with. If you add Anthyllis vulneraria to your garden, you won’t need to prune the plant. Finally, while kidney vetch certainly grows abundantly, it is not considered invasive and will not drown out any of your other plants.

Despite the fact that Anthyllis vulneraria is extremely easy to grow and take care of, it rewards gardeners with so many different gifts that stretch well beyond its beauty. Kidney vetch will help with erosion control, fill your garden with numerous butterflies and bees, and even — if you are into herbal medicine — serve as an ingredient for herbal remedies that support a healthy digestive system and speed up wound healing times.

Kidney vetch is a surprising drought tolerant plant, and if you live in an area that receives ample rainfall, you will not need to practice supplemental watering to continue to enjoy healthy and strong Anthyllis vulneraria bushes that flower abundantly. If you have extremely hot and dry summers, and it has not rained in a good while to the point where the soil is completely dry, you can occasionally give your kidney vetch a deep watering if you like; the plant will appreciate this, but will almost certainly survive even if you don’t.

It is important to avoid overwatering your kidney vetch, because despite the fact that Anthyllis vulneraria is very resistant to fungal infections, there is always a risk of root rot if you create conditions wherein the plant sits in soggy soil for prolonged periods of time.

If you would like to add kidney vetch to your garden and don’t know anybody who is already growing it, you can find their seeds online — and we’d like to recommend that you choose several different variants, so that you end up with yellow, orange, and red flowers!

Gardeners who would like to start a new kidney vetch indoors can do so in the late winter to early spring, a few months before you are expecting the last frost in your area. Those who would like to sow kidney vetch straight in the garden should do so in the late fall. In either scenario, the steps to take are nearly identical. Simply press your Anthyllis vulneraria seeds into the ground, mist them to provide some moisture, and wait for the seeds to germinate. This process can take between two weeks and a month. If you are starting your kidney vetch seeds indoors, choose a sandy and perlite potting mix. Note that some people recommend soaking Anthyllis vulneraria seeds for a night before sowing them indoors.

It is also possible to propagate kidney vetch through cuttings, which should be taken in the late summer. To do so, simply take a four to six inch (10 to 15 centimeter) length from your kidney vetch, looking for the presence of nodes. Use a sterilized pruning tool, and then dip your cutting in a rooting hormone powder, taking care to shake off any excess. Plant the cutting in a pot prepared with a sandy and perlite soil, water it very gently, and wait for roots to take hold. Once your cutting has taken root, which you can check by gently tugging on the base of the cutting, it will be ready to transplant to your garden, or to give as a gift!

Anthyllis vulneraria is an extremely hardy plant that can succeed in many different conditions, even in poor and polluted soil types that would quickly cause trouble for other plants — and when you look at their amazing flowers, it is almost difficult to believe that such a beautiful plant can be so low-maintenance. Whether you are looking for plants for your new rock garden, have a sloping coastal garden, or would like to add colorful flowers to your butterfly garden, kidney vetch is suitable for almost anyone!