Holly Bush Guide: How to Grow & Care for “Ilex” Shrubs

If you are the type of gardener that likes to daydream about holidays from time to time, holly shrubs might be the ideal festive trigger! Keep reading to find out more about these Christmas symbols and how easy to grow, care for, and even propagate they are.

Holly shrubs originate from numerous regions around the world, enjoying the greatest diversity of species in Southeast Asia and America. These plants usually grow in a wide range of climates but they prefer the temperate, tropical, and subtropical zones.

If you want to grow holly shrubs for their berries, you should know a very interesting fact about them. Most holly species do not have both male and female flowers, which are essential parts in fruit-bearing. It is important to remember that you must grow at least one female holly plant and one male to produce berries. But do not worry! This is a fun process and a great opportunity to add some charming colours and textures to your garden.

Although all species of Holly shrubs deserve our love and appreciation, some of these beauties have won the hearts of many gardeners much easier than other shrubs. The most irresistible cultivars include American Holly, ‘Blue Princess’ Holly, Catberry, Dahoon Holly, English Holly, Hawaiian Holly, Inkberry, ‘Hetz’ Japanese Holly, ‘Sky Pencil’ Holly, and Winterberry.

Like most species of shrubs, holly bushes can tolerate a wide range of lighting conditions. These plants thrive in locations where they can receive plenty of full sunlight daily. However, they can also do just fine in partially shaded areas but they will not be as fruitful.

Although not all, most Holly shrubs are hardy in USDA zones 5 to 10. They cannot withstand extreme temperatures very well and prolonged hot or freezing periods can damage their lovely foliage. In regions with harsh winters, we recommend you focus on dwarf varieties and bring them inside once the temperatures get cooler, usually in autumn.

If you are growing your Holly shrubs in proper conditions, they will have no major problems regarding pests and fungal diseases. Although some pests like holly leaf miner, spider mites, scale insects, or nematodes can visit them occasionally, you should not panic! All you have to do is remove the intruders from your plants and apply neem oil to prevent future infest.

Holly shrubs look at their best when you let them be and develop into their full splendour. Yet, some varieties will need regular pruning if they become too leggy or grow too big. This process consists of trimming damaged or dead branches off and lightly shearing their leaves to give them that tidy overall appearance.

The most important factor at play when it comes to planting is to choose the cultivars that suit your garden or home perfectly. Due to their different sizes and growth habits, you should look for specimens that will not outgrow the space you are planting them in. However, the only exceptions are those Holly varieties grown mostly for foliage because you can shear them regularly to maintain a certain size.

Indoors, dwarf Holly species will remain smaller and will be less likely to overcrowd a place. Make sure you plant these shrubbies in a medium to a large pot and add some tiny companions for a nice-looking picture.

In outdoor settings, dwarf or groundcover varieties work best for hillsides and slopes. You can also use these particular types in mass plantings for erosion control. If you want to grow Holly shrubs in borders or landscapes, you can plant any species that fits your surroundings as long as you allow extra room between them

To avoid cold or heat stress, it is wise to plant your Holly shrubs in more easy-going seasons like spring or fall. These plants prefer loamy growing mediums with an acidic pH of 5.0 to 6.0. You can increase soil acidity by adding peat moss, pine needles, or aluminium sulfate into the substrate. Moreover, you should plant these buddies in soil that has excellent drainage.

Typically, all Holly shrubs will benefit from regular fertilizing. Feed your plants with a slow-release fertilizer designed for Hollies or acid-loving species like Rhododendrons or Camellias. You must repeat this process twice every year in spring and autumn, following package instructions accordingly.

Holly shrubs usually perform best if you provide them with regular watering to maintain their soil constantly moist. But! Once established, these adorable plants can tolerate drought for short periods. As they were not super friendly already!

During hot and dry summer months, Holly shrubs will require generous watering once or twice every week. In regions with frequent rainfalls, however, supplemental irrigation is not necessary. These shrubs are susceptible to root rot, so you should always check the soil in-between waterings to avoid this burden. Make sure you water them only when the top layer of soil has dried out entirely.

Holly shrubs are truly a work of art, so it is more than natural to want more of them for yourself, your friends, or your family members. Luckily, you can propagate these companions through stem cuttings with little to no effort on your part. And the results come pretty fast!

Now, there are two types of Holly cuttings that you can use for propagation. The most popular cuttings are those taken from hardwood growth during cold weather or their dormant period.  However, you can also use softwood cuttings taken in summer or late autumn.

For hardwood cuttings, you should cut above and below the bud unions from the branches for best growth. If you want to use softwoods, cut about 0.24 inches (0.6 cm) below a leaf node.

Once this process is complete, dip the cut ends into rooting hormone then plant your cuttings in a mixture of potting soil and sand. Holly cuttings need a well-lit location and regular watering to develop a healthy root system. Once established, you can transplant each baby plant in its permanent spot.

These plants are so friendly and they come in many different colours and sizes. Gardeners love them because they are so easy to grow care for and we are sure that you’ll soon love them too. The natural charm of holly shrubs makes them a perfect addition to your plant family. Give them a chance now and you will thank us later!

Are you already growing holly shrubs? Share your experience in the comments below! 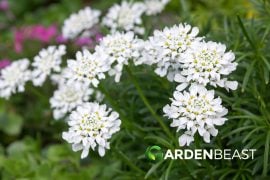 Candytuft Guide: How to Grow & Care for “Iberis Sempervirens” 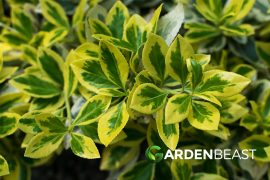 Euonymus Guide: How to Grow & Care for “Spindle” 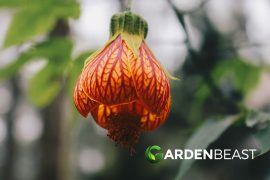 Abutilon Plants Guide: How to Grow & Care for “Indian Mallow”