Grape Hyacinth Guide: How to Grow & Care for “Muscari”

Read our guide to Grape Hyacinths for everything you will ever need to know! Tips for planting and caring for "Muscari"

If you want a bulb that is easy to plant, doesn’t mind being placed in the sun, the shade, or anywhere in between, and returns each spring with more perfumed, vibrant, and long-lasting flowers, you’ve landed in the right garden! Grape hyacinth, also known as Muscari, is going to become your new favourite bulb plant as you wait for the tulips to make an appearance!

The elegant grape hyacinth is called this way because its blooms resemble clusters of tiny grapes. Muscari blooms in mid-spring, with bright flower spikes that can last up to a month. The pleasant scent tells us that the warm summer days are just around the corner. The musk, or pleasant fragrance of the blossoms, is where the name Muscari supposedly derives from.

While initially only found throughout Turkey and Europe, grape hyacinths have become very popular in US gardens due to their beautiful blue colour. Blue-coloured flowers are often picky and need a lot of attention, but Muscari is very friendly and can be grown even by the most inexperienced of gardeners.

Eager to learn more about how to grow and care for your grape hyacinths? Then continue reading our detailed guide about Muscari plants!

Muscari plants are small, but they compensate with elegance and ease of care. Grape hyacinths can be planted in fall and forgotten about for months until they emerge from the soil and brighten up an otherwise barren early-spring garden.

As we promised, Muscari is pretty easy to care for and requires minimal attention. While it does best in full sunlight, it can tolerate partial shade. Don’t get too concerned about this, as many trees are yet to leaf out in early spring, so most gardens get plenty of sunlight to keep Muscari plants happy.

Although muscari can adjust to most climate conditions, they do need a cool period – usually during the winter – so that they can be stimulated to bloom. If you live in an area where winters are warm, your muscari may not be able to bloom during the spring.

Prune the flowers off with scissors as soon as they fade, leaving the stalks to nourish the bulb. Spread a layer of compost during the fall, and don’t worry if they grow leaves; they’re only accumulating more bulb nourishment. Allow them to revert to their original state naturally.

The grape hyacinth requires just a little amount of fertilizer right before and during blossoming. After flowering, it’s more necessary to add compost to the soil. The bulb that remains in the soil will be able to store the nutrients for the rest of the year, allowing it to bloom even more beautifully the following spring. 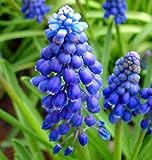 Grape hyacinth, similar to other spring-flowering bulbs, is best planted during the fall. you want to keep your grape hyacinths safe, plant them in well-drained soil. Grape hyacinth bulbs may decay if they are planted in a damp location.

The simplicity with which you can plant these bulbs is one of the most enticing features of muscari. The bulbs should be spaced 3 inches apart and planted 3 inches deep. You can speed up the process by digging up a shovel full of soil and planting a few bulbs at a time. Grape hyacinth bulbs grow in colonies that expand over time, but the plants are not invasive.

Muscari, like other tiny blooming bulbs, look best when planted in large masses. For a tiny garden, start with a cluster of at least 25 plants. Plant at least 100 flowers in a flower garden or spread beneath trees and bushes in a typical city garden. Because the bulbs are not very expensive, it is worth buying large, high-quality ones that produce around five flower stalks each. Low-quality bulbs, in contrast, will produce two to three flowers.

Muscari plants can also be grown indoors, although the process is a bit more complex. You need a pot that is at least 3 inches deep, filled loosely with potting mix.

Place the bulbs onto the mix with their pointed end up, but do not press them down, or else the roots won’t be able to grow. Sprinkle some more potting mix over, but do not cover the tips. After thorough watering and draining, place the pot in a dark, cool place (around 40 °F) for about ten weeks. Basements are great for this but make sure you keep the environment barely moist.

Move the pot to a warmer location (around 50°F) once the shoots reach 2 inches. From now on, you need to increase watering to keep the soil moist and gradually move it to warmer places until it fully blooms. Now you can place it in a bright room, but away from direct sunlight.

Grape hyacinths require a lot of moisture during the spring, but as the season advances, the soil should be left to dry out a little. During the months when they aren’t in bloom, this helps to avoid bulb rot.

Muscari plants require a lot of water when they grow in direct sunlight. However, make sure to avoid waterlogging at all costs! If the water stays in the soil, the flower bulb will rot and die, and the flower will perish.

During wet spring days, rainwater is enough to keep the plant nourished. Only during extended droughts should you consider watering them more often. In moderate climates, they should be watered around two times a week.

Muscari is just as easy to propagate as is to care for. In fact, you have two beginner-approved methods to do it: from bulbs and from seeds. Choose the method that fits your garden best.

Your muscari plant will drop its seeds after it has finished flowering. Usually, these grape hyacinth seeds will have developed into plants by spring, so you just have to let Mother Nature work its course.

If you want to feel like a true gardener, you can also grow Muscari by preserving the seeds. Cut down the dried seedpods from the plant, collect the tiny seeds inside, and place them on a moist paper towel in a plastic bag that isn’t completely closed. Encourage sprouting by placing it in the refrigerator for a few months. The seedlings can then be planted in pots until they are large enough to be planted in the garden.

However, be mindful that grape hyacinths multiply fairly fast and easily by themselves, which means that if you don’t keep an eye on them and keep adding to their army, they might swiftly take over your garden. Plant them along a brick or concrete pathway to create a natural barrier that they won’t cross.

You can also reproduce your grape hyacinth bulbs if cultivating seeds is not for you or if you just wish to move some grape hyacinths to some other section of the garden. Dig up a clump of plants and divide the bulbs beneath them with care. They should come apart quite easily, and there should be plenty of offset bulbs to choose from. Pick the healthiest one. Plant them anywhere you like, and they should start multiplying from the new bulbs by next season, producing even more of the lovely tiny plants.

Muscari is a popular plant that signals the beginning of the spring season. These vibrant flowers are easy to cultivate, low-maintenance, and hardy, making them ideal for those guilty of planting and forgetting.

They’re always resilient but reliable, and they never fail to provide a beautiful splash of colour to the early spring garden. You’ll enjoy how clumps grow year after year, bringing additional flowers!

What’s more, these tiny, adorable flowers can be grown indoors as well to cheer up your late-winter windows.

Star of Persia Guide: How to Grow & Care for “Allium Cristophii”

Star Jasmine Guide: How to Grow & Care for “Trachelospermum Jasminoides”

Borage Guide: How to Grow & Care for “Borago Officinalis”