Golden Marguerite Guide: How to Grow & Care for “Cota tinctoria”

Read our guide to Golden Marguerite for everything you’ll ever need to know! Tips for planting & caring for “Cota tinctoria”

By Miruna SecuianuJuly 12, 2022
Affiliate Disclosure: We independently test & research all products reviewed on the site. We may earn a small commission if you buy through one of our links. This does not affect our reviews or placement of products on the site.

The Golden Marguerite is a simple, yet elegant flower that is known by many names, including Yellow Chamomile, Yellow Daisy, Indian tea, Paris Daisy, Dyer’s Chamomile, and Boston Daisy.

Marguerite is the French name for Daisy, and we find it quite charming. In horticulture, this delightful flower is called Cota tinctoria, although it is often referred to as Anthemis tinctoria.

Are all these names a bit confusing? Not to worry, many people believe that the Golden Marguerite is the same as the classic Chamomile used for brewing tea.

In fact, the two are different species. Chamomile is a common name for daisy-like plants belonging to the family Asteraceae, but when it comes to chamomile tea, Anthemis nobilis and Matricaria recutita are the two species that are normally used.

That being said, you can use Golden Marguerite plants for the purpose of tea brewing (Indian tea), although many gardeners choose it for its attractive lacy foliage and bright flowers that resemble miniature sunflowers. Moreover, it is low maintenance, makes an excellent border plant for the garden, and looks amazing in bouquets of vase arrangements.

Do you want to know more about this perky flower? Keep reading our guide and you will find out everything about its unique features, ornamental uses, growing and caring tips, propagation, and more!

To successfully grow Golden Marguerite, it is important to understand its preferences for temperature, light, water, and nutrients. Although it thrives on neglect and can grow in where other perennials would perish, it remains beautiful only if certain conditions are met.

The Golden Marguerite prefers temperate climates, but it can survive even if the temperature is relatively hot, like in the Southern regions of the United States.

However, south of zone 7 it will grow beautifully at first, but when the summer heat arrives it will whiter and become a mess. Also, keep in mind that this plat is not frost tender and won’t survive long cold spells. In climates with a mild winter, the plant can remain evergreen.

Cota tinctoria is a sun-loving plant so allow it to grow in full sun and warm locations in your garden. Ideally, it should receive a minimum of 6 hours of direct sunlight every day. Although it can tolerate part shade conditions, we do not advise planting it in a spot with full shade.

Another perk of growing Golden Marguerite is the fact that it is extremely drought-tolerant, and it can grow in hot areas.

To enjoy an attractive plant with abundant blooms all summer long and into early fall, we encourage you to deadhead after flowering. As flowers lose their petals, they begin focusing all their energy on forming seeds.

Deadheading helps the plant channel its energy into forming flowers, resulting in a second flush of blossoms in late summer or early fall. After the plant flowers for a second time, you can cut it back to about 6 inches (15 cm) tall to encourage basal growth and prevent it from setting seeds. Divide every two or three years before the growing season to ensure plant vigour. 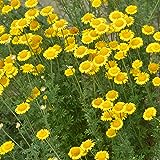 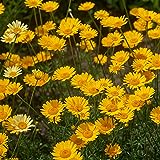 The Golden Marguerite is not too picky when it comes to soil conditions. We love the fact that this plant can grow where other plants struggle. While it can successfully tolerate average and poor nutrient soils, urban pollution, and even salts, it does not appreciate soggy or heavy clay soils.

Cota tinctoria prefers loose, well-draining soil with neutral to alkaline pH levels. However, it does fine with sandy and even chalky soil conditions.

Avoid planting it in humid conditions or low areas that are susceptible to standing water. Good drainage is key to the plant’s success. The plant is susceptible to powdery mildew, so make sure it has adequate airflow.

Nursery-grown transplants can be planted in spring or early summer. To encourage a vigorous root system, water them immediately after planting, and then every couple of weeks for the duration of the first growing season.

Seedlings should be planted about 6 to 8 inches (15-20 cm) apart. Close planting will help prevent weeds from growing in between them. Seedlings might require protection from snails and slugs, as they can eat a plant faster than it can grow. Until the plants are big enough, you can use organically approved slug pellets.

The Golden Marguerite does not usually need to be watered or fertilised. Although the plant can withstand prolonged stretches of dry weather, it will produce the most abundant blooms if watered regularly.

Keep in mind that the soil must be kept moist, but not soggy, as too much water can cause root rot and fungal disease. To avoid overwatering, allow the soil around the plant to dry out before giving it more water.

If you live in an area with frequent rainfalls, you won’t need to water your plants at all. If you have too much rainfall and your garden turns muddy, don’t panic! Raised beds and raised rows are a great solution. Elevating your planting area allows excess water to drain away from the roots.

The easiest way to create a raised bed is by mounding up the soil. Keep in mind that you will only be able to walk on the paths between the raised beds.

Another great idea is to place low box frames on the ground, tires, or build your own frames from concrete blocks or other materials.

A short-term problem can easily be fixed with trench funnelling. For an ongoing issue, we recommend a French drain. Go light on the mulch, as it can slow the soil from drying and create a habitat for slugs.

If you enjoy Cota tinctoria’s vibrant blooms and fragrant foliage, you will be happy to know that it is very easy to spread it to different areas of your garden and share it with your loved ones. The plant can be propagated by three methods: division, sowing, and cuttings.

The ideal time to propagate Golden Marguerites by division is in the spring before the growing season begins. In fact, propagating by division is recommended every 2-3 years because the growth rate and habits of the plant demand it.

Start by digging up the plant, carefully not to damage its root system. Set the plant on the ground and use a clean, sharp gardening tool or knife to divide the parent plant into two or more equal parts. Make sure to include parts of the foliage and roots. The new transplants can be planted in pots or in a new location in the garden and should be generously watered.

Another simple way to multiply the adorable Yellow Daisies is by seed. You can buy the seeds or collect them from spent flower heads that have lost their petals.

Mature plants will usually have ripe seeds by August. However, keep in mind that if you are growing a hybrid variety, they may display different characteristics than expected. Moreover, over a few years, the plants will revert to the wild type.

To separate the seeds from the chaff start by rubbing the dried flower heads over a container. Next, shake the container while gently blowing the chaff out. If you are growing different varieties of chamomile together, the plants will likely cross-pollinate.

To prevent this, keep them separated in different beds. Seeds have a good shelf life, so you can store them in a cool, dry location for more than three years.

We recommend starting the seeds indoors in seed starting mix about two months before the last frost. It will take between two weeks and a month to germinate. Surprisingly, Cota tinctoria seedlings are hardy so they can be transplanted outside before the last expected frost.

Excess seedlings can be kept for about a year without flowering. Alternatively, you can sow them directly at the desired location in April or May. Sow the seeds approximately 1/8 inch (0,3 cm) deep in evenly prepared soil. Although Cota tinctoria will self-seed, chances are that most tiny seedlings will be eaten by slugs.

Another great way to propagate Golden Marguerite is by cuttings, and the only way to propagate hybrid varieties. To start, take 4-to-6-inch (10-15 cm) side stems from new growth in early summer. Make sure you use a sharp, sterilized knife to prevent any disease.

Cut half of an inch (1 cm) below a bud or leaf node and remove the bottom leaves, making sure to leave at least three upper leaves.

Next, choose a pot with drainage holes and fill it with potting mixture. Water the potting mixture so that it’s damp and while you prepare the cutting, allow it to drain. Roll the stem in powdered rooting hormone and make evenly spaced 1-inch (2,5 cm) holes in the container.

As long as the leaves don’t touch, you can plant several stems in the same container. Insert the stems in the holes and pat the soil around them enough so that they hold upright.

Make sure to cover the pot with a clear plastic bag and use small sticks to prevent the plastic from touching the leaves or stems. Place the container in indirect light, as direct light can damage the sensitive cuttings. If the potting soil becomes too dry, mist daily.

If there is too much condensation so that it drips down inside the pot, poke a few holes in the plastic to promote air circulation. Once new leaves appear, it means that your Golden Marguerite cuttings have rooted. You can now plant them in individual containers and allow them to develop until spring. Once the danger of frost has passed, feel free to transplant them in the garden.

There are many ornamental plants that can be mistreated and still thrive and the Golden Marguerite is certainly among the toughest of them all. Because it thrives on neglect, we always recommended it for beginner gardeners and those who live in hot places. This plant will surprise you with an abundance of bright yellow flowers and aromatic foliage all summer long. Moreover, it makes an excellent cut flower and is super easy to propagate.

Are you growing Cota tinctoria a.k.a. Golden Marguerite? Share your experience in the comments!