Domino Cactus Guide: How to Grow & Care for “Echinopsis Subdenudata”

Our guide to Echinopsis Subdenudata for everything you will ever need to know! Tips for planting and caring for Domino or Easter Lily Cactus.

By Miruna SecuianuNovember 2, 2020
Echinopsis Subdenudata
Affiliate Disclosure: We independently test & research all products reviewed on the site. We may earn a small commission if you buy through one of our links. This does not affect our reviews or placement of products on the site.

Echinopsis subdenudata, or more commonly referred to as the Domino cactus, the Night Blooming Hedgehog, or the Easter Lily Cactus, is part of the Cactaceae family and has a stoutly spherical shape with small white dots – which also give it its name.

More recently referred to as Echinopsis ancistrophora as well, the Domino cactus is native to Bolivia and Paraguay. These cacti usually grow in the warmer months and are famous for their large white flowers that bloom from their domino dots. This is indeed a sight to behold, as these flowers are also famous for having a very short life span – they usually bloom during the night and will start wilting away the next day.

Growing Domino Cactus is a piece of cake! It is a low maintenance type of plant, and even though it’s called a Blooming Hedgehog – you won’t have to worry about it being prickly due to its small to non-existent spines which also makes it perfect for beginners, first-time plant owners, and enthusiasts.

Much like other types of cacti, this lovable hedgehog is a low-maintenance little guy. The Domino Cactus will only require you to keep it dry and warm at all times. Its most comfortable temperature is around 70° Fahrenheit (21 degrees Celsius), however, it has been known to thrive even in temperatures as low as 50° Fahrenheit (10° Celsius) given the proper help.

It should be kept in half shade during the summer, and in full sunlight during the winter – if you need help with some extra warmth or light you can also employ the use of a growing lamp – however, in this case, you should be careful to sync the lamp with the day-light schedule so you don’t weaken it.

Please be mindful that this is a species native to South America and so it genetically conforms to that seasonal schedule, so if you’re noticing your cactus struggling despite doing everything by the book, consider changing its environment to match southern hemisphere conditions, which translates to your winter should become their summer, hence the growing lamp, and conversely your summer should become their winter.

During its growing season, you will be able to help it bloom its famous flowers by ensuring that its surrounding temperature is 70 degrees Fahrenheit (21° Celsius) – this temperature is paramount for the flowers to grow. If instead, you are not interested in the flowers, you can keep it at any temperature.

Repotting should be done while the cactus is active in a pot with drain holes at the bottom. The Domino Cactus likes to eat! Just kidding! However, you should plant it in a well-drained mix and indeed help it with some cactus fertilizer in its growing months, specifically around spring until late summer.

If you want to create your own soil mix – drainage is key – so, make sure you have porous soil and add a layer of pebbles and a layer of sand in the pot so the water can escape and provide sufficient air for the roots for proper ventilation.

The Echinopsis subdenudata like both the indoors and the outdoors – as long as it gets enough warmth. If you want to take your domino cactus outside, you should first place it in a half-shaded place to acclimatize it and avoid any sunburns. And if you live in a 4 seasons place, make sure you bring it indoors for hibernation during autumn and winter.

One of the main reasons that the Echinopsis subdenudata is perfect for beginners is that it does not need regular watering, however when its soil becomes dry to the touch you should make sure that the water reaches the roots. Be careful not to leave it in a pool of water tough, as it will affect the health of your cactus and runs the risk of rotting its roots. During its hibernation period, in the winter, it needs even less water than in the growing season.

Moreover, if you keep your hedgehog cactus outdoor, make sure it has some shelter and is not placed under somewhere where it can soak up all the water from direct rainfall as it will have the same effect as overwatering and might damage it. If by chance, you have overwatered your Domino there a few steps you can take to ensure their recovery – firstly wait for the soil to dry up entirely and monitor their appearance – if the problem persists you can try repotting it with fresh soil mix. 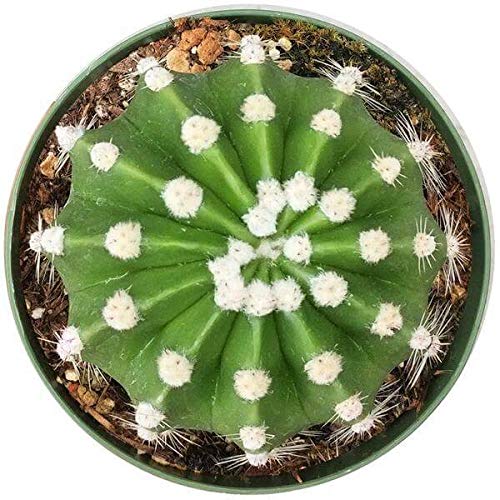 Multiplying the Echinopsis subdenudata can be easily done either by using offsets or by seed.

Propagation by seed is a bit slower and can take up to 12 months for the seedling to appear. Unlike other plants, seed propagation for the Domino cactus does not require the seed to be placed in an overly moist environment, but rather place the seed in a well-drained soil mix, making sure that the soil covers the seed and mist water over the topmost layer.

Planting the Domino cactus seeds should be done in spring to ensure successful growth as they are quite sensitive to the cold much like their older counterparts. The seedling pots should be kept in a half-shaded environment with temperatures around 21 degrees Celsius(xF) and can be repotted as soon as they are large enough to be handled.

You can also propagate your Echinopsis subdenudata by repotting its offsets. This can be done anytime from early spring to the late days of summer. However, you should be mindful of the blooming flowers and wait for them to wilt before attempting this process. This should not take long, as the Domino cactus’s flowers are known for their very short life span.

Once you can collect the offsets, either by cutting or removing – you should let them form a callus. Afterward, plant them in the pot so they can form roots making sure that you place the pot in a warm environment. The callusing process does not take more than a few days, and you can leave the baby Echinopsis subdenudata on a paper towel to finalize this process.

If your own Domino Cactus appears to not grow offsets, do not despair – it has been known to happen. There are a couple of things you can do to maximize its chances of producing them like ensuring a healthy hibernation season and proper soil adherence (a topmost layer of something abrasive like sand), watering, and fertilization.

However, it might just happen that your particular dotted friend is unable to produce them. If that is the case don’t fret as the Echinopsis subdenudata is one of the more common types of cacti and can be sourced both online and offline fairly easily.

A more risqué alternative, for the more experienced growers, and depending on the size of your cactus (hint: the larger the better), is to try and cut it horizontally, thus making 2 cacti. After the cutting you should leave the upper part to callus and replant it as you would a normal offset waiting for the roots to grow – however, this might result in a not so aesthetically pleasing result for the bottom half of the cactus.

Now that you know how to grow and care for the Domino Cactus also known as Easter Lily Cactus, all you have to do is add one to your plant collection. This friendly cactus can bring a speck of playfulness to any shelf or desk or it can be the spot of green that you’ve been missing.

It is an easy-to-care-for cactus that requires few things to make it happy – so, as long as you keep it warm, feed it during its growing periods, and sheltered during hibernation it will reward you with beautiful looking and smelling flowers that are sure to brighten up your day.