Dianthus Guide: How to Grow & Care For “Dianthus Flowers”

Read our complete guide to Dianthus Flowers for everything you will ever need to know! Tips for planting and caring for Dianthus plants.

By Hollie CarterFebruary 28, 2022
Dianthus Guide: How to Grow & Care For “Dianthus Flowers”

Dianthus is a cottage-garden favorite throughout the United States. The Dianthus describes a genus of plants in the Caryophyllaceae family or flowers.

There are some 300-species of Dianthus, with the majority of them being native to Asia and Eastern Europe. A few varieties are indigenous in the Northern regions of the African continent, with one species being native to the Arctic regions around the tip of North America.

Some of the favorite flowers in this genus include the likes of carnations, garden pinks, and the sweet William. Most Dianthus are herbaceous perennial plants, but there are a few biennials and hardy annuals, with a few varieties classified as a dwarf shrub.

Dianthus features linear, narrow foliage, with a green-blue hue that appears opposite each other on the plant’s slender stems. The pink, red, and sweet Williams do well as border plants for the garden, or by the side of pathways in the garden.

Dianthus flowers consist of five petals, with a zigzag or frilled edge. The flowers produce hues of red and white tones, which can range from deep marron to light pink. In many cases, the flowers have two-tone color schemes that look fantastic as the plant starts to burst into bloom.

The Dianthus blooms from the late spring, right through to the early fall. The attractive flowers and mounding growth produces a fragrance in the garden that’s similar to the scent of cloves or cinnamon, bringing a spicy sweetness to the aroma floating around your yard.

Dianthus – The Flower of the Gods

As one of the earliest cultivations, the Dianthus species has an extensive history of use as an ornamental flower, stretching back for centuries. The Dianthus was a favorite flower of the ancient Greeks and Romans, where they often featured in celebratory garlands.

The Dianthus name comes from the combination of Dios (god) and anthos (flower), from the Greek language, which translates into the “flower of the gods.” Howe the plants got this name remains unclear, but there are a few tall tales that gardeners can consider.

One of the stories states that Diana, the goddess of the hunt, accused a shepherd of scaring away her prey while on a hunt. The sound of the shepherd’s flute chased away the animals, leaving Diana without a kill.

In a fit of rage, the goddess plucked out the eyes of the shepherd, and where his eyes landed, carnations suddenly sprung from the ground, symbolizing the spilling of innocent blood by the goddess Diana.

According to the Christian doctrine, carnations bloomed alongside the Via Doloros, where Mary of Magdalen’s tears fell to the ground, as Jesus carried the cross on his back to the crucifixion site of Golgotha – providing another mythological reference to the spilling of innocent blood.

Carnations and pinks are a long-time favorite of cottage gardeners, and they look fantastic grown in rockeries. The longevity of the flower after cutting makes it a popular ornamental flower used in displays and bouquets. Dianthus hold onto the fragrance long after cutting, making them a popular choice for boutonnieres.

The Dianthus comes in a variety of attractive colors, with hues of white, red, and pink in the flowers. It’s not surprising that D. plumarius earned the moniker of “pinks.” 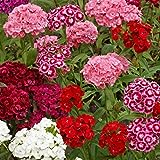 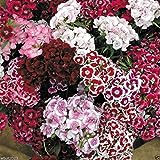 Dianthus in the Garden

The hardiness of the plants varies between the species in the genus. Most Dianthus are suitable for planting and growing in USDA zones 3 to 9, but the vast majority of species grow well in the home garden.

If you’re unsure whether or not the plants will survive the winter season, then start seedlings over the wintertime, or take cuttings from the plant for next season. Most carnations will grow to heights of 24-inches, but sweet Williams only reaches 18-inches tall throughout the growing season.

Pinks will grow into mounds that reach 6 to 10-inches in height, and alpine pinks are the smallest species in the genus, only reaching heights of 4 to 6-inches. The alpine pink Dianthus is ideal for planting in rock gardens.

The mound-forming, short pinks create a mesmerizing accent along borders in the garden, as well as in window boxes and rockeries. The tall sweet Williams and carnations are best for further back in flowerbeds, where they stand tall over other flowers and shrubs, providing an additional layer of color to the garden.

Dianthus requires well-drained soil, as it doesn’t enjoy getting its “feet wet.” Overly saturated soil may lead to the development of disease and root rot in the plant. Gardeners also need to ensure that the plant receives adequate airflow through the foliage and flowers to drive off disease like white powdery mildew and rust.

Gardeners must ensure that they water their new Dianthus plants at least once a week, and let the soil dry out between waterings. Fertilize your Dianthus using an all-purpose liquid plant fertilizer with a 20-10-20 ratio. You can also apply a slow-releasing granular fertilizer around the base of the plant in the late spring.

Gardeners must ensure that they snip or pinch off the dead flowers to prevent the formation of seeds, and foster a second round of blooming before the end of the growing season. After the growing season comes to a close, gardeners should cut back the flower stems to the ground.

For additional winter protection for your Dianthus, place a 4-inch layer of mulch around the base of the plant, and make sure you do this before the first frosts hit the ground. Remove the mulch after the last of the frosts pass, and allow the plant to start the growing season.

Gardeners can propagate Dianthus from seeds indoors or sow then directly into flowerbeds.  Growing Dianthus from cuttings is also an option.

Fortunately, Dianthus is one of the more popular flowers with gardeners. Therefore, there are plenty of breeding programs that increase the hardiness and disease-resistance of the plant. Most varieties of Dianthus are resistant to pests and disease.

However, the gardener needs to ensure that they plant their Dianthus in well-draining soil. If the roots remain wet for too long, it may result in the onset of root rot. Root rot causes the plant to shed its flowers, and the foliage might start to turn yellow.

Some gardeners might find aphids feeding on the flower stems, and gardeners can remove them by spraying them off with a hose. If aphids become a problem, spray the plants with neem oil. Neem oil acts as an organic pesticide, keeping the bugs off of your plants.

Carnation flies can also be a problem, laying eggs on the leaves of your carnations. When the eggs hatch, the larvae burrow into the stem of the plant in search of food. Planting your Dianthus alongside garlic will prevent carnation flies from settling on your Dianthus.

Rust and powdery mildew and also be a problem for Dianthus, but only during extended periods of rain and cold.

Star of Persia Guide: How to Grow & Care for “Allium Cristophii”

Star Jasmine Guide: How to Grow & Care for “Trachelospermum Jasminoides”

Borage Guide: How to Grow & Care for “Borago Officinalis”