Common Fig Guide: How to Grow & Care for “Ficus Carica”

Guide to Common Fig Tree - Everything you will ever need to know! Tips for growing and caring for “Ficus Carica”

Despite its name, there is nothing common about the Common Fig. This is one of the most interesting Mediterranean fruit shrubs. In environments similar to its natural habitat, it can easily be grown outdoors with minimum effort. In areas with harsher winters, it can also be grown in pots. Moreover, if you are skilled with pruning scissors, this exotic shrub can even be grown as a bonsai tree.

The Fig belongs to the Mulberry family, known as Moraceae or the Fig Family. It is quite a large family, comprising of 38 genera and over 1100 species. All of the species in this family have milky sap and a secretory cell in the leaves that produces latex. But the fig tree that we know and love is a crossed tree of many species from South-Western Asia.

About the Common Fig

Ficus Carica grows in warm, temperate regions. It prefers porous soil with good draining properties and it can grow well even in soils with little nutrients. This tree will need at least 8 hours of direct sunlight to thrive. It needs plenty of water, but it also needs a dry season as well as a cold season. Keep in mind that a young tree can die during a chilly winter, so it is best to grow it in a pot until it is about 5 years old. Winter mulching is a great way to help a fig tree survive winter.

Ficus Carica grows relatively fast, so if you grow it in a pot, you will have to repot it every two years. Even if your shrub doesn’t outgrow its pot, it is still necessary to replace most of the soil in the pot every three years.

If you want to plant your Ficus Carica outdoors, remember that it has a very invasive root system. The roots can choke the nearby plants and they can even damage sidewalks and fences. You can prevent roots from being too invasive by building some underground retaining walls.

This tree will require regular pruning, but only during the first years. Ideally, you should prune it before the spring blossoms. Once the tree’s form is established, avoid pruning it, as you can affect the crop. Fig trees have a toxic milky sap, so wear protective gloves when pruning them.

When grown outdoors, the Common Fig tree will get the necessary water from rain and underground sources. However, do water your fig tree if you notice signs of stress because its water requirements can differ based on the weather or the soil nutrients. Potted trees should be watered weekly. For optimal results, dig a 10 cm deep moat around the base of your tree and pile the soil around the edges of the mot to keep the water in. Water it for about 45 minutes each week.

Potted trees need more frequent watering. It is best to water them once every couple of days. Reduce watering frequency as the weather gets colder. During the wintertime, when the trees are dormant, they only need to be watered once a month.

Ficus carica can be propagated from seed, but since this is time-consuming and has lower chances of success, most cultivators choose to propagate through hardwood cuttings. The cuttings should be collected in early spring and they should be taken from 2-3-year-old shouts. You can increase your chances of success by girdling your shoots a month before cutting them. To do this, remove only a thin layer of bark from the lower inch of the shoot. Use a rooting hormone and wrap polyethylene and aluminum around the shoot. 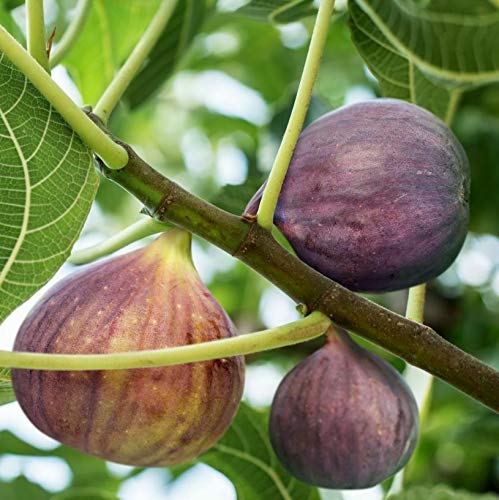 The cutting should be about 25 cm long and 1,5 cm thick and they should include at least 2 nods, one at the base and one at the top. Apply a rooting hormone, and allow the cutting about 10 days to develop a callous. During this time, you can place it in slightly moist peat.

Use a peat perlite mix as the medium for your nursery bed and allow the new plant about a year and a half to develop proper roots. If you plant a fig tree directly outdoors, you won’t have to irrigate it, but if you expect it to catch roots indoors, you will have to mist it regularly.

The fig is one of the most exotic fruits. It can be eaten fresh or dried, it makes for a delicious jam and it can be incorporated in many sweets. Moreover, the Ficus Carica tree is very visually pleasing.

So, whether you want to grow it for its fruits or ornamental purposes, this tree can be very rewarding. Keep in mind that it is a rather demanding tree. It requires a specific climate and plenty of natural sunlight. Consider all the aspects that we detailed here before you decide if your garden or your patio can accommodate the Common Fig.

Are you growing fig trees in your garden? Share your experience in the comments below!

Copper Plant Guide: How to Grow & Care for “Acalypha wilkesiana”

Magnolia LiLiiflora Guide: How to Grow & Care for Lily Magnolia

Curry Plant Guide: How to Grow & Care for “Helichrysum Italicum”

Camellia Japonica Guide: How to Grow & Care for “Japanese Camellia”