Our Guide to the California Barrel Cactus - Everything you will ever need to know! Tips for planting and caring for "Ferocactus Cylindraceus"

Cacti are among the most popular and beloved houseplants and for a good reason. They are easy-to-care-for and incredibly cute. From the large variety of cacti available in specialty stores, you can choose the Barrel Cactus.

Barrel cacti get their botanical name, Ferocactus cylindraceus, from the Latin prefix ‘ferox’, meaning ferocious, wild, or fierce, and ‘cylindraceus’ that means cylindrical.

Many cacti in this group have long­, hooked spines; however, they are well behaved in a garden setting. They are key elements in very dry landscapes, especially in the warmer parts of the southwestern United States and northwestern Mexico.

Ferocactus cylindraceus was first described by the German-American botanist George Engelmann in 1853. George Engelmann (1809-1884) was particularly active in the Rocky Mountains and northern Mexico, contributing to the study of flora in the west of North America.

About the California Barrel Cactus 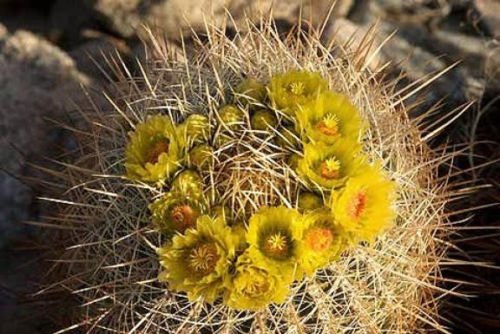 The barrel cactus can be grown indoors as a houseplant or outdoors, in arid gardens and it makes an attractive addition to any cacti and succulent collection.

Caring for the Barrel cactus is quite easy, and it makes a great houseplant for a novice gardener. Location, water, soil, and container are the important things to consider when growing a barrel cactus.

Barrel cacti require a sunny location, minimal watering, and a well-drained potting mix. Potted cacti should be kept in a bright sunny location, in the warmest room of your home. However, direct southern sunlight may burn the plant in the really hot summer, so you should move them back from the window or turn on your blinds to diffuse the light.

When grown in a garden, make sure they receive enough sunlight. Full to partial sun is optimal for barrel cacti. If you live in a region with warm winters, it is better to grow the Barrel cacti outdoors rather than indoors.

Warmth throughout the year will increase your success at growing barrel cacti as these plants require minimum temperatures above 5°C.

During the summer it is best to keep the plants outside even if the temperatures rise above 30° C. Barrel cacti love thrive in the heat of the summer. However, they do need a period of cool rest in winter to produce flowers in spring.

The soil for Ferocactus should contain mainly sand with a little perlite, topsoil, and compost. Store-bought succulent and cacti mixes are a good option when growing barrel cacti indoors. Unglazed pots are best for potted cacti because they allow the evaporation of excess water.

When growing barrel cacti outdoors, avoid situations where your plants could sit in water by planting them on heaps. Use long tweezers to remove weeds that grow in the spine net.

Repotting is also an important part of cacti care. The most important rule is to repot when the roots start showing through the drainage holes. The soil should be dry when you repot barrel cacti and the container should be slightly larger than the plant.

Watch for infestations with scale insects, mealybugs, or spider mites. Rot is only a minor problem and as long as your cacti are watered and “aired” correctly, you won’t have to worry about it.

The barrel cactus can be quite wonderful when it is well-cared for. A very important element to consider when caring for Barrel cactus is the water. This succulent type requires typical watering as the other succulents. The best method of watering a barrel cactus is the ‘soak and dry’ technique and it consists of allowing the soil to dry completely between waterings. By using this watering method you will keep your Barrel Cactus happy healthy.

The barrel cactus is native to arid desert regions and usually has only rainwater to supply its humidity needs. In summer, you should water your Barrel cactus once per week.

The Ferocactus doesn’t need much water in winter when it is dormant, so you can neglect your cactus during the cold months.

Adequate watering in spring may encourage the plant to bloom and to reward you with a large yellow flower. If you’re lucky enough, the cactus will produce edible fruit.

Wet feet are the enemy, so keep in mind that barrel cacti should not sit in water.

As mentioned above, the barrel cactus naturally grows in low fertility zones, so their nutrient needs are low. Fertilize your barrel cactus once a year, in spring, at the end of its dormancy period. A good formula for the Barrel cactus is low nitrogen liquid fertilizer. The quantity of fertilizer will depend on the size of your pot and plant. Check the packaging for guidance on the exact amount.

Barrel cacti can be easily grown from seeds, which are the only way of propagating these friendly plants. To obtain barrel cactus seeds, allow the fruits to ripen. It is worth mentioning that the fruit must be overripe before picking the seeds. You will have to clean them and to wait for them to dry before planting them.

Fill a flat container with succulent and cacti soil mix and sow the seeds on the surface of the soil. Sprinkle a thin layer of sand on top of the seeds and then mist evenly. Cover the flat with a plastic wrap or lid and keep it in a warm place.

When the seeds germinate and show signs of growth you can safely transfer them to a larger pot. Always use gloves when handling Ferocactus, as their fierce spines can be painful.

Ferocactus cylindraceus is a round, large barrel-shaped cactus covered with a dense net of spines. The spines vary in color from red to brown to yellow and look like harsh, coarse hair combed up toward the tip of the plant. After a thorough rain, the spines glow and the barrel cacti look even more magnificent.

It is an easy-to-care-for cactus that requires few things to thrive. So, as long as you keep it warm, water it during its growing times, and protected during hibernation it will reward you with beautiful flowers and various colored spines that are sure to brighten up your day.

Barrel cacti are protected in many places so they should never be damaged or removed from their natural habitat, but you can always find them in online stores and at experienced cacti growers.

Are you growing barrel cacti? Share your experience in the comments below!

Mammillaria Gracilis Guide: How to Grow & Care for “Thimble Cactus”