Read our guide to Agave Amica for everything you’ll ever need to know! Tips for planting & caring for “Tuberose”

By Miruna SecuianuNovember 21, 2022
Agave Amica Guide: How to Grow & Care for “Tuberose”
Affiliate Disclosure: We independently test & research all products reviewed on the site. We may earn a small commission if you buy through one of our links. This does not affect our reviews or placement of products on the site.
If you are looking for a flowering perennial that looks amazing and smells nice, Agave amica a.k.a. the Tuberose is a great option.

Tuberose is also known as Polianthes tuberosa or Agave amica and it is a perennial plant from the Asparagaceae family. Its common name derives from the Latin word “tuberosa” which means swollen or tuberous and it refers to its root system. Tuberose contains extracts which are used as a note in perfumery.

The Europeans were fascinated by these plants when they arrived in Mexico, so they brought them to Europe and to their other colonies. That’s when the Tuberose made its debut in the world of French perfumery, and centuries later, it is still beloved by perfume wearers and famous perfumers such as Fracas, Gucci, Prada, Giorgio Armani, and more

Tuberose is currently grown in tropical and temperate countries. Most gardeners are familiar with this plant and appreciate it for its ornamental value.

Before you start growing this attractive plant in your home or garden, it is important to know that Agave amica is mildly toxic to pets and humans. This means that ingesting it might not kill your pet, but it will most likely cause digestive discomfort and pain.

If you want to be sure of the growing success of your plant you will have to plant the tuberoses in pots outdoors. If you live in a region with cold weather, move the plants indoors to prevent them from being affected by frost. If you choose to grow them directly in your flower garden, be sure to dig up the plant in winter and transfer them to a warmer environment.

During the period of growing and flowering, namely in the spring and summer, you have to use a fertilizer for these bulbous plants, following the indications specified on the label of the product. 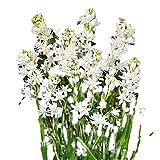 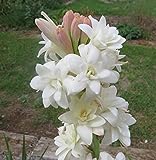 The tuberose plant can be affected by snails and slugs which are tempted to eat it. The best way to get rid of these annoying pests is to remove them by hand. Another pest that can affect your Agave amica is the red spider – this pest will cause the appearance of discoloured spots on the plant since it feeds on the cells of the plant. You can eliminate it with the help of acaricides.

Depending on the zone you are living in, tuberoses are planted differently. If you live in a colder zone with hard winters, the tuberoses are considered summer annuals, so you can plant them in a pot and keep them outdoors during summer and move them indoors when the temperatures start to decrease.

You have to keep the Tuberoses indoors over winter as these plants need a minimum temperature of 15 degrees Celsius. To prepare them for the winter period, you need to cut back on watering and allow the pots to dry off pots at the end of the summer when leaves begin to die. You can resume your watering and feeding schedule in the spring.

When keeping the tuberose indoors, the UV rays from a south-facing window may scorch the plant. The best way to ensure your plants get the right amount of light is by keeping them near a bright window, but away from the afternoon sun. Another vital aspect of caring for these plants is that they need fresh air when grown indoors.

So, occasionally, open the window to allow the plant to enjoy the breeze. The ideal temperature in the room can range between 18 to 20 degrees Celsius, so it is safe to say that the Tuberose needs moderate temperatures to encourage flowering toward the end of the following year.

To produce flowers, the Tuberose plants require around four months of warm temperatures from the moment the rhizome is planted. Usually, gardeners start the rhizomes in pots in greenhouses beginning in late winter or early spring and move them outdoors in late spring, once frost danger has passed.

If the tuberoses are planted directly in the ground, they may not bloom until September, this way the period in which the plant blooms is reduced considerably. When the foliage begins to yellow, in October, you should clip the leaves and take the rhizomes out of the soil and store them in a cool, dry and dark place during the winter period.

When you plant Tuberoses be sure to provide them with a warm sheltered position and humus-rich, fertile, well-drained soil. Due to their height, the Tuberose plants may need protection against strong winds and rain. You can use a stake to secure the stem in an area shielding it from severe weather. The plants develop well in sandy soil and in sunny spots. When the plants start to grow, they will need a great amount of moisture so apart from watering, a humus-rich soil will help the plant greatly.

When it comes to watering, humidity represents an important part of the care routine. The tuberose sucks up moisture and requires plenty of water. Keep it hydrated with frequent watering. And be careful that as the plant grows it will need even more water.

Make a humidity tray to increase moisture around the tuberose in the air, especially in the winter or if the room where you keep the pot is dry. Place 2.5 cm of wet pebbles on a tray or saucer, then put the pot on top of the pebbles. Add water as needed to keep the pebbles wet but keep the water beneath the top of the pebbles so moisture doesn’t wick up through the drainage hole.

Ensure that your pot or container has adequate drainage holes, as the roots of the plant must never sit in waterlogged soil. Also, remember that weekly deep waterings are better for plants than lighter drinks every day or two.

Fertilize the tuberose every three or four weeks when the plant is actively growing during spring and summer, using a solution of water and soluble fertilizer. An 8-8-8 fertilizer, with equal parts nitrogen, phosphorus and potassium is highly recommended for tuberose. You can also apply solid fertilizer around the soil of the plant once every 6 weeks.

For the Tuberoses that you plant outdoors, you will have to water them moderately during the growing season. As Tuberoses grow, provide roughly 2.5 to 4 cm of water once a week. In outdoor conditions, these perennials prefer more frequent watering in smaller amounts. Reduce watering if there is a rainy period. Be sure not to overwater them, as Tuberoses rot easily and this is the reason why you really need well-drained soil.

Tuberoses multiply by the division of tubers in autumn and by seed in spring. There are different procedures depending on whether the tuberose is planted in a pot or directly in your garden. For the division of tubers, if the plant is potted, you have to follow the next steps: you have to carefully remove the plant from the pot and after that try to remove substrate as much as possible from the roots.

For the third step, you have to separate a tuber with the help of scissors, previously disinfected with pharmacy alcohol. For the final step, you will have to plant the tuber in another pot and water it with rooting agents to encourage the development of the roots. If the tuberose is planted in the garden you will have to dig around the plant with a hand hoe about 30 cm deep.

Then water the plant thoroughly to soften the soil. Next, you will have to separate the tuber with your hands or with the help of a serrated knife, previously disinfected with pharmacy alcohol. Now you can plant the separated tuber in another spot of your garden.

If you want to multiply Tuberoses from seeds here are the steps you need to follow: first, you will need a seedling tray that you will fill with universal growing compost and water thoroughly. After that, you will have to put a maximum of two seeds in each socket and cover them with a very thin layer of substrate, as the seeds still need some light in order to germinate.

For the last step, you will have to put the seedling in a plastic tray without holes, outdoors, in a semi-shade place. As an important tip try to avoid letting the soil remain dry between waterings and when you water the seedling just pour water into the tray without holes. The seeds will germinate between one and two months.

If you decide to grow Tuberoses in your flower garden, you will enjoy the strong perfume and beautiful, delicate, white flowers all summer long. These ornamental plants do not have any special needs regarding their care.

The only thing you have to take care of is to keep them indoors if you live in an area with hard winters or if the temperatures go below 15 degrees Celsius. Another thing to keep in mind is that these plants need plenty of water, a minimum of six hours of sunlight, well-drained soil and fertilizer from time to time.

Agave amica, commonly known as Tuberoses, are among the most popular florist shop flowers worldwide thanks to their amazing smell and delicate blooms. If you love Tuberoses as much as we do, you can try your hand grow these plants in a cutting garden and use their blooms to create fragrant flower arrangements and bouquets.

Are you growing Tuberoses in your garden? Share your experience in the comments!

Dischidia Nummularia: How to Grow & Care for “String of Nickels”